Above the 38th Parallel 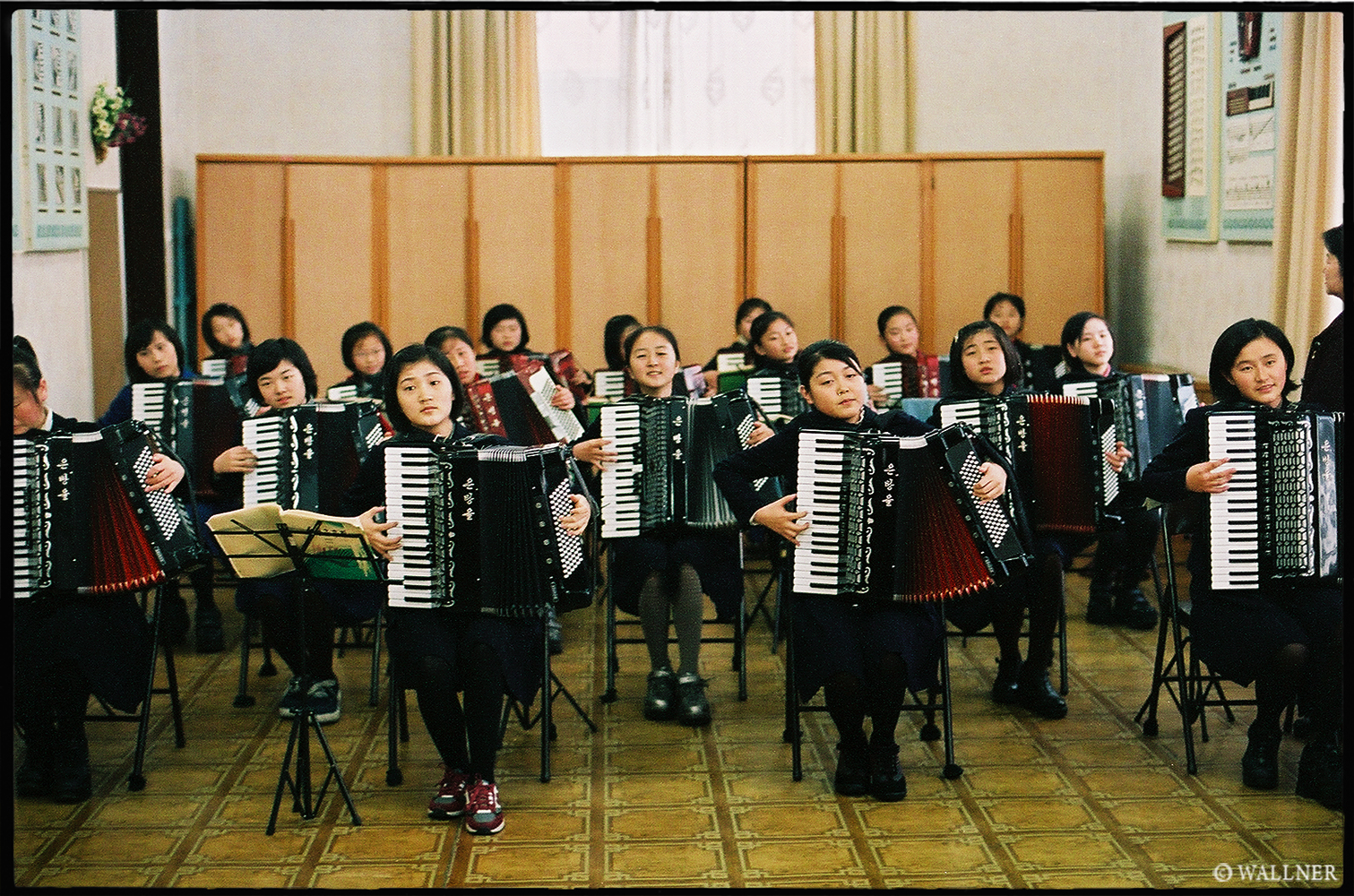 I can vaguely remember the times in my childhood when I was confronted with try-outs for the local football or taewando club. The children in North Korea are raised to succeed in some skills, arts or some position within society. Waisting time is not an option. After completing your academic years, you become skilled in some field which your parents might choose for you. For the lucky minority, either becoming a scientist, joining the Korean’s People Army, or if you are lucky to be chosen to be one of the few hundred thousands to be part to perform in the Arirang Festival, also known as the Mass Games. A surreal performance dedicated to the great leader once a year. We unfortunately missed the games during our visit, but we were privileged to visit the School children’s Palace and watch a few selected students perform without even possibly making the slightest mistake. For more on North Korean children perform within the Mass games, watch ‘A State of mind‘ by Daniel Gordan. 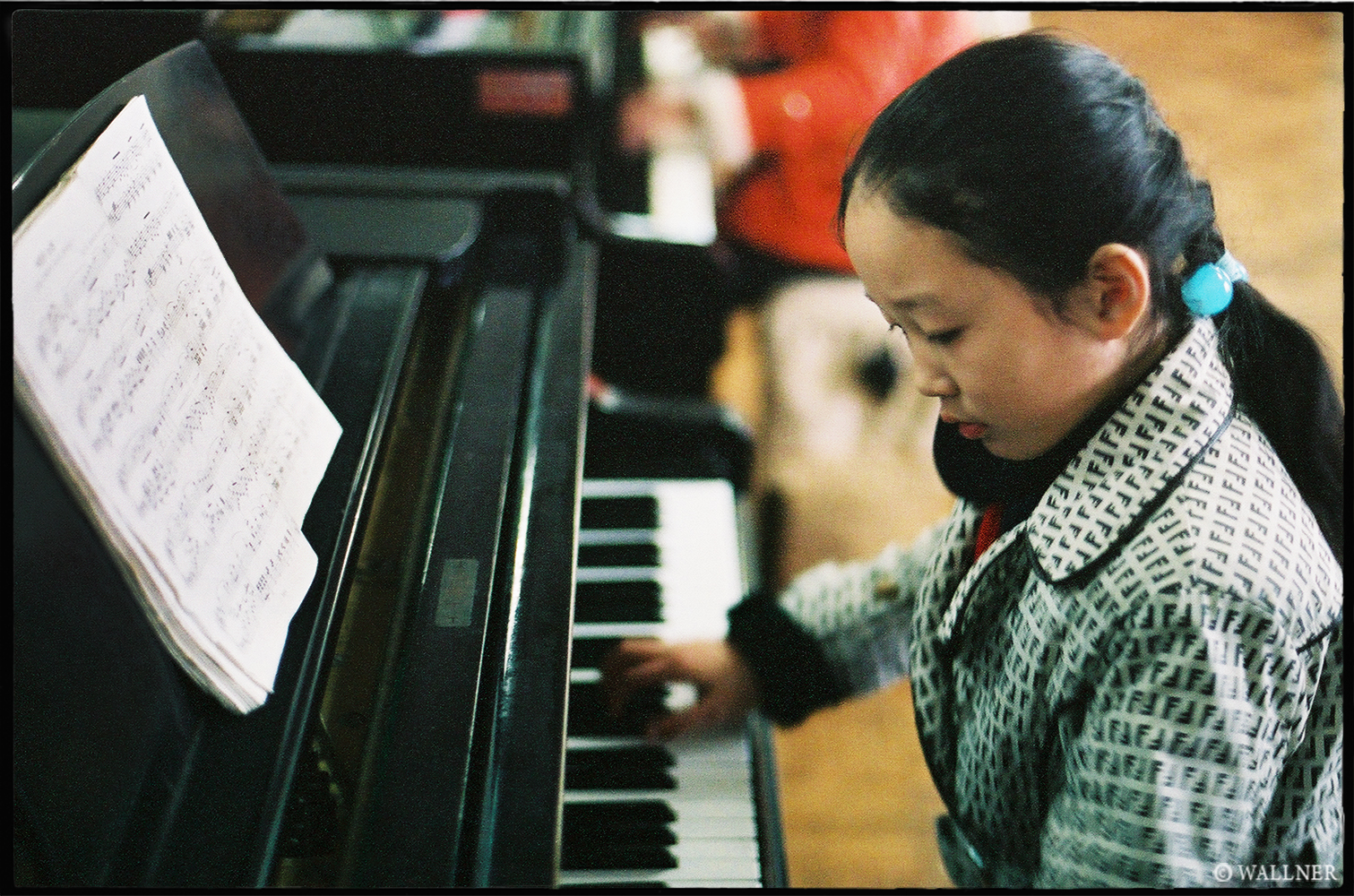 Rondo alla Turca by Mozart, or the Hungarian Rhapsody No.12 in C minor by Franz Liszt is probably not of any difficulty for this nine year old North Korean girl.

Stalin knew that the visual association with children was the key to ensure popularity when he poses with six year old Gelya Markizova in 1936. Decades later even Kim Il-Sung is presented as the lovable father figure to the youth. 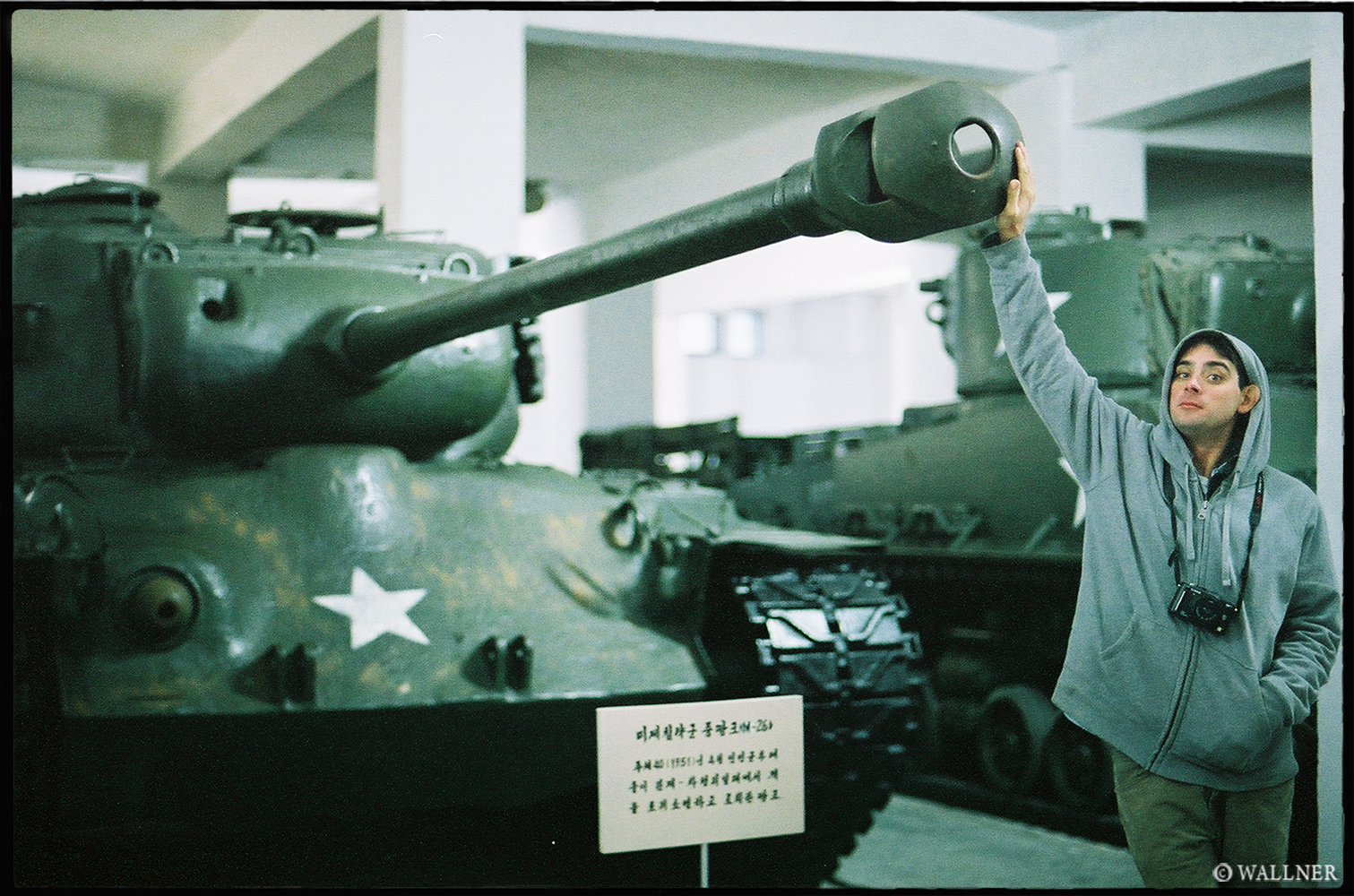 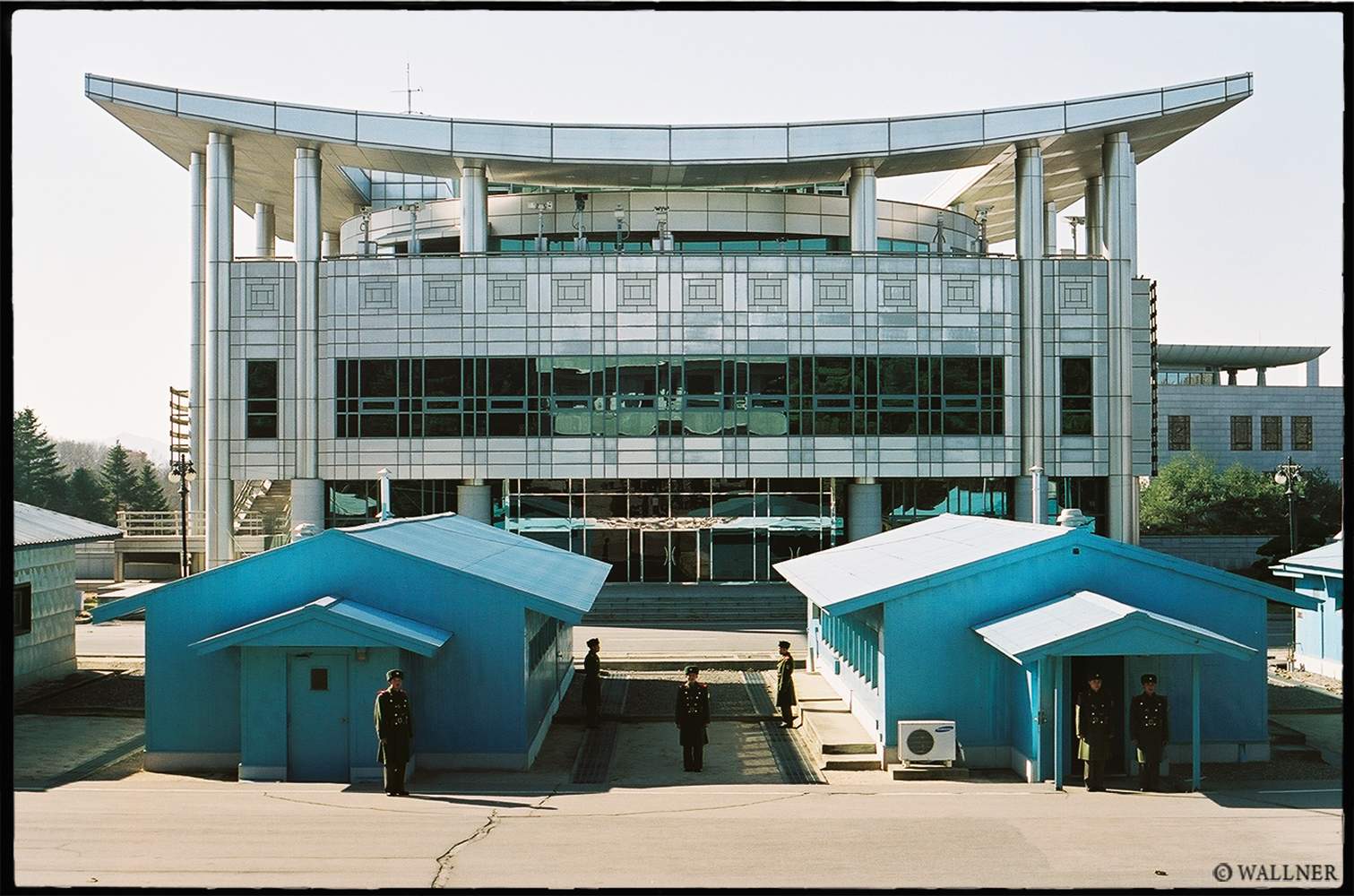 The Korean Demilitarized Zone (DMZ) is one of the mandatory visits on almost any tours going to the DPRK. Going along with the 38th parallel, this 160 miles long heavily guarded border between the north and the south is a crucial line of tension between the divided nations on the Korean peninsula. On this photo you can see six soldiers standing firmly on North Korea soil, while South Korean territory is only a few steps away. 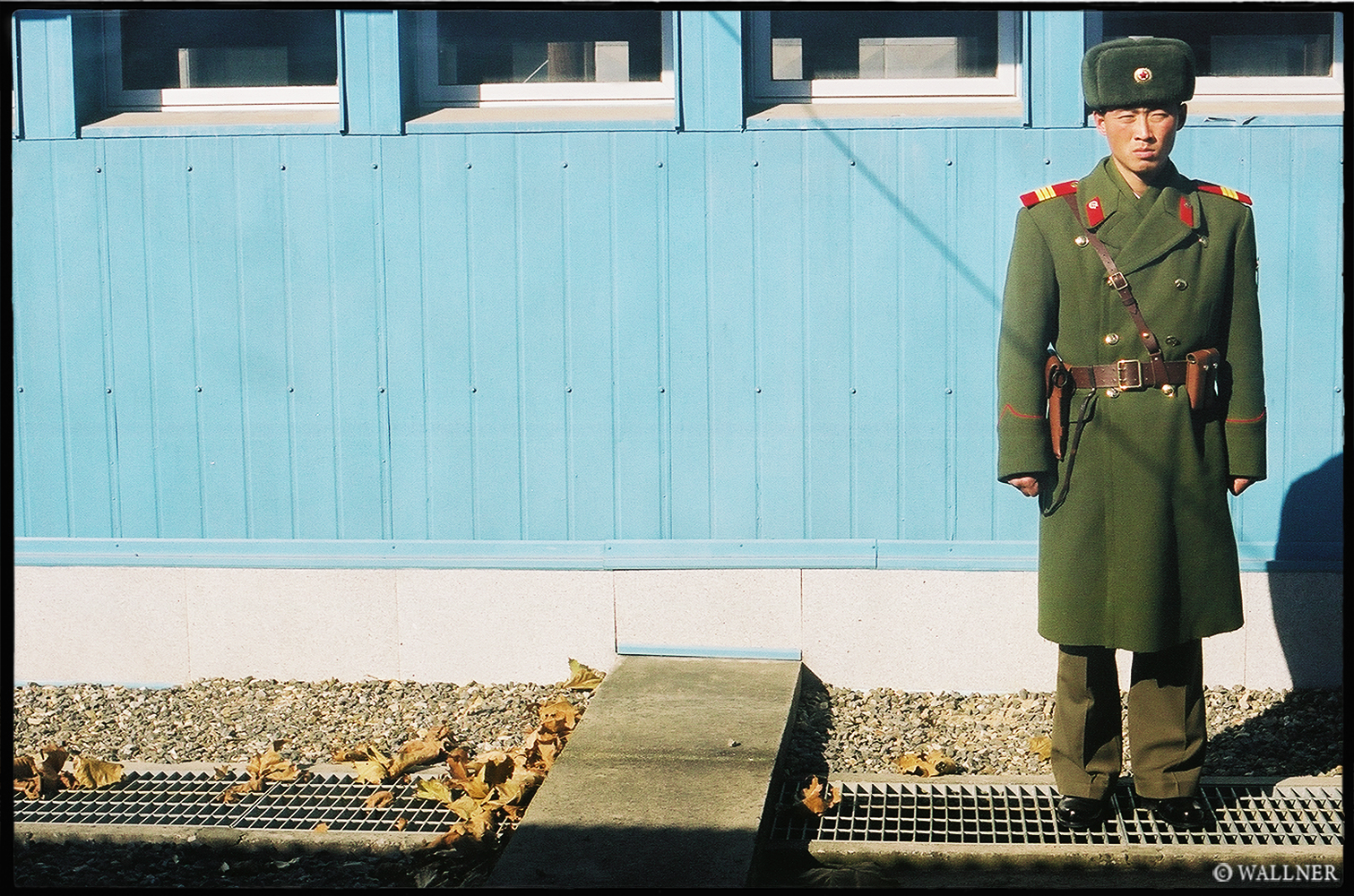 Either the South Korea soldier was on a quick lunch break, or just didn’t feel like waisting his time standing all day. Leaving the North Korean soldier all by himself on the right side of the dividing line, while tensions were high at Yeonpyeong Island on November 23rd, 2010. While you are being toured around the DMZ alongside a general that explains his point of view of the matters and historical efficiency of the Demilitarized Zone, you feel that everyone is a bit up tense and doesn’t dare to ask questions or make a joke out of something. Everyone besides Kenny Reed. While the general was talking about different nations that contributed something to DPRK during the Korean War, such as military aid, weapons, etc. Kenny decided to interrupt when we misunderstood the translator saying that a Scandinavian country donated a “Hostile Sheep“, actually meaning to say “Hospital Ship“. No one dared to call the guide out on the mispronunciation, but Kenny’s questioning if Denmark really donated “one really pissed off sheep with armor around it” to North Korea was priceless. The translator corrected herself after an awkward silence of Kenny acting out a vicious Sheep. Only Kenny… 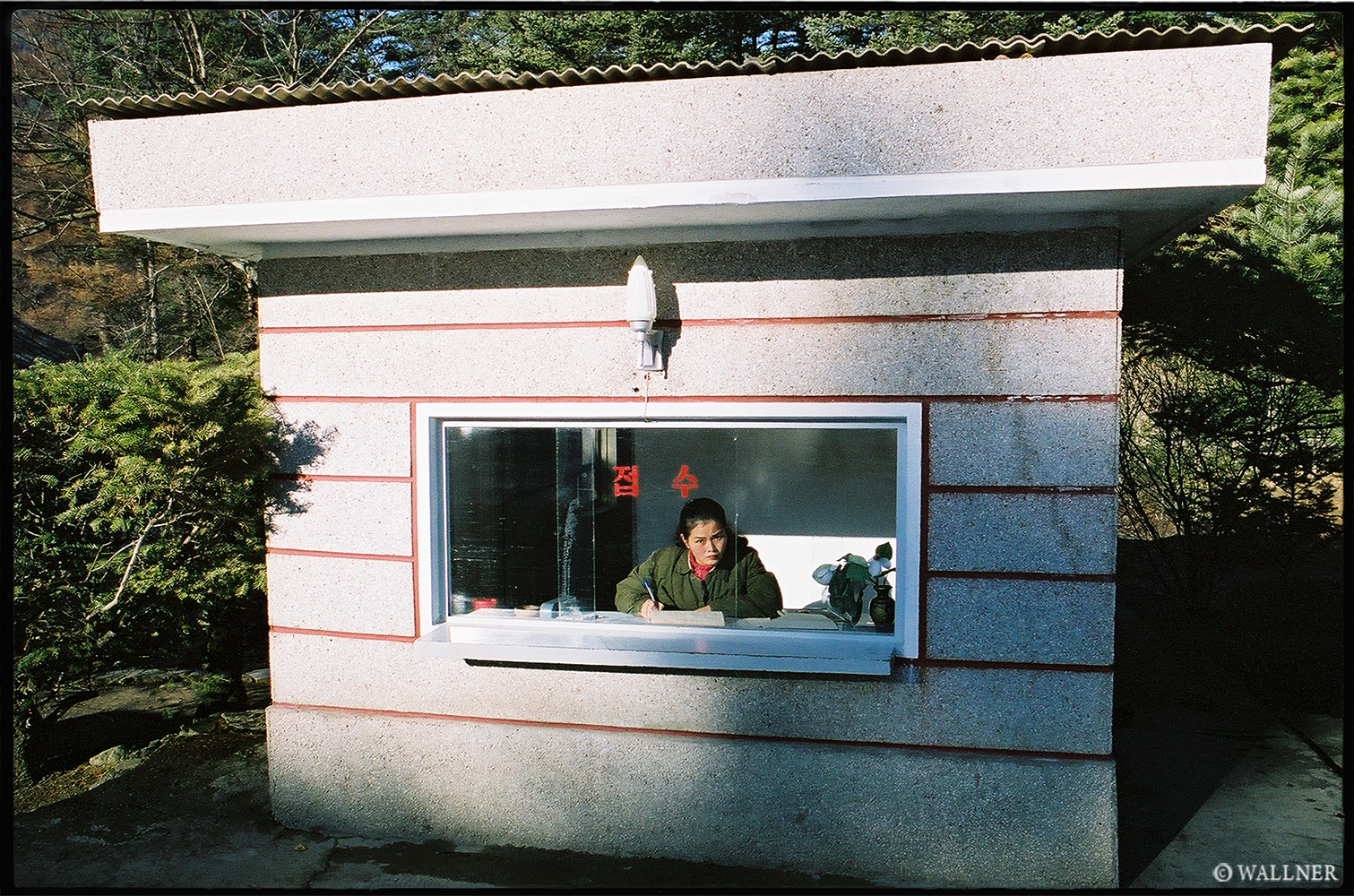 After checking out a bunch of military related points of interests, museums, monuments and so forth, you are treated for a gift two hours north of Pyongyang, Mount Myohyang. Inside of the forest, the International Friendship Exhibition is hidden within a huge iron doors. The Exhibition holds presents that have been collected throughout the years from foreign political figures, notable figures, politicians and organisations. Unfortunately you were forbidden to take any photos the 69,378 gifts presented from 155 different nations to Kim Il-Sung. But I can assure you, items such as a crocodile skin suitcase from former Cuban leader Fidel Castro, a basketball signed by Michael Jordan, railway cars from Mao, a bear’s head from former Romanian dictator Nicolae Ceauşescu, just adds on top of all the eccentric’s of North Korea. 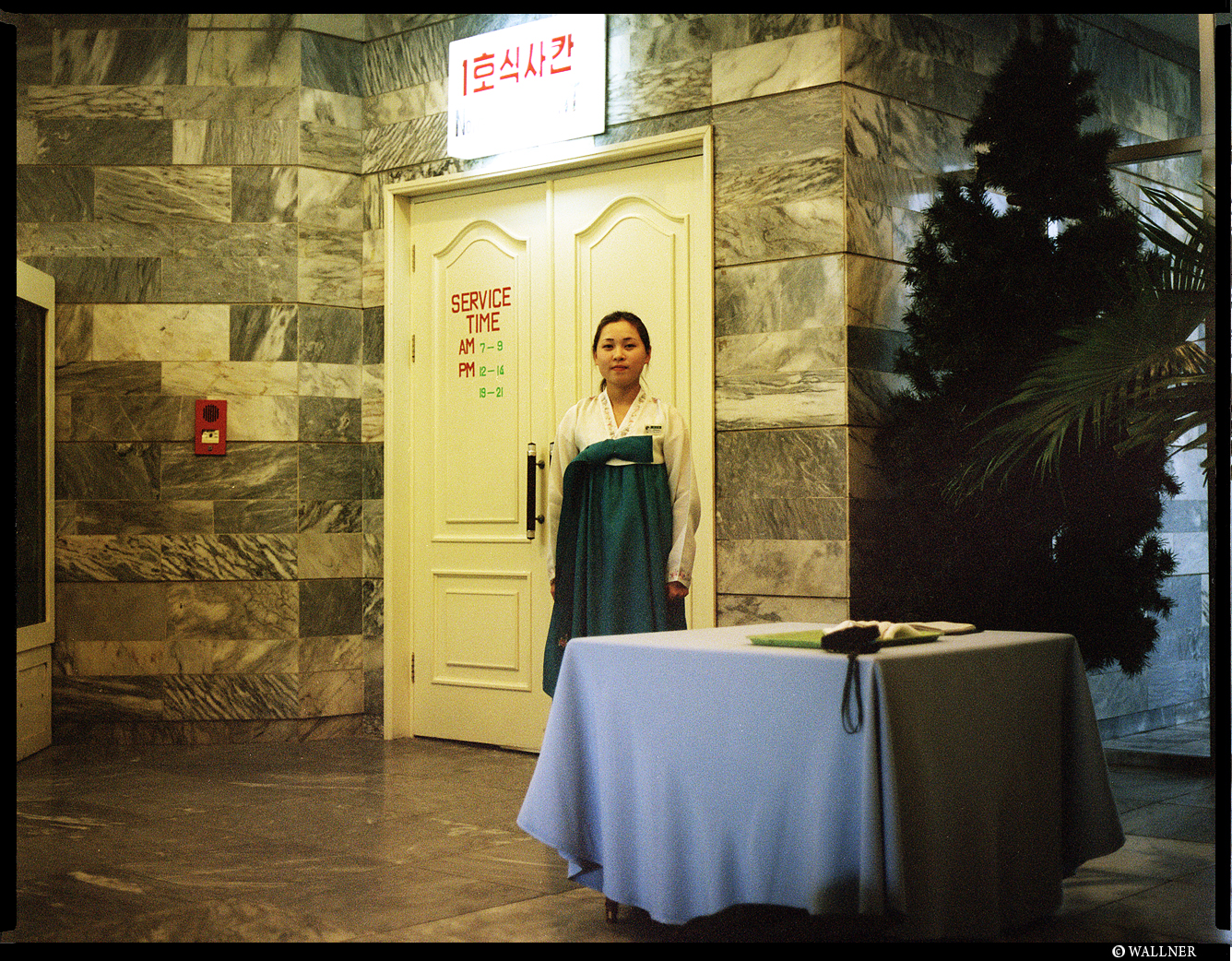 Food was never an issue for us foreigners, I wish I could say the same for the rest of the nation. 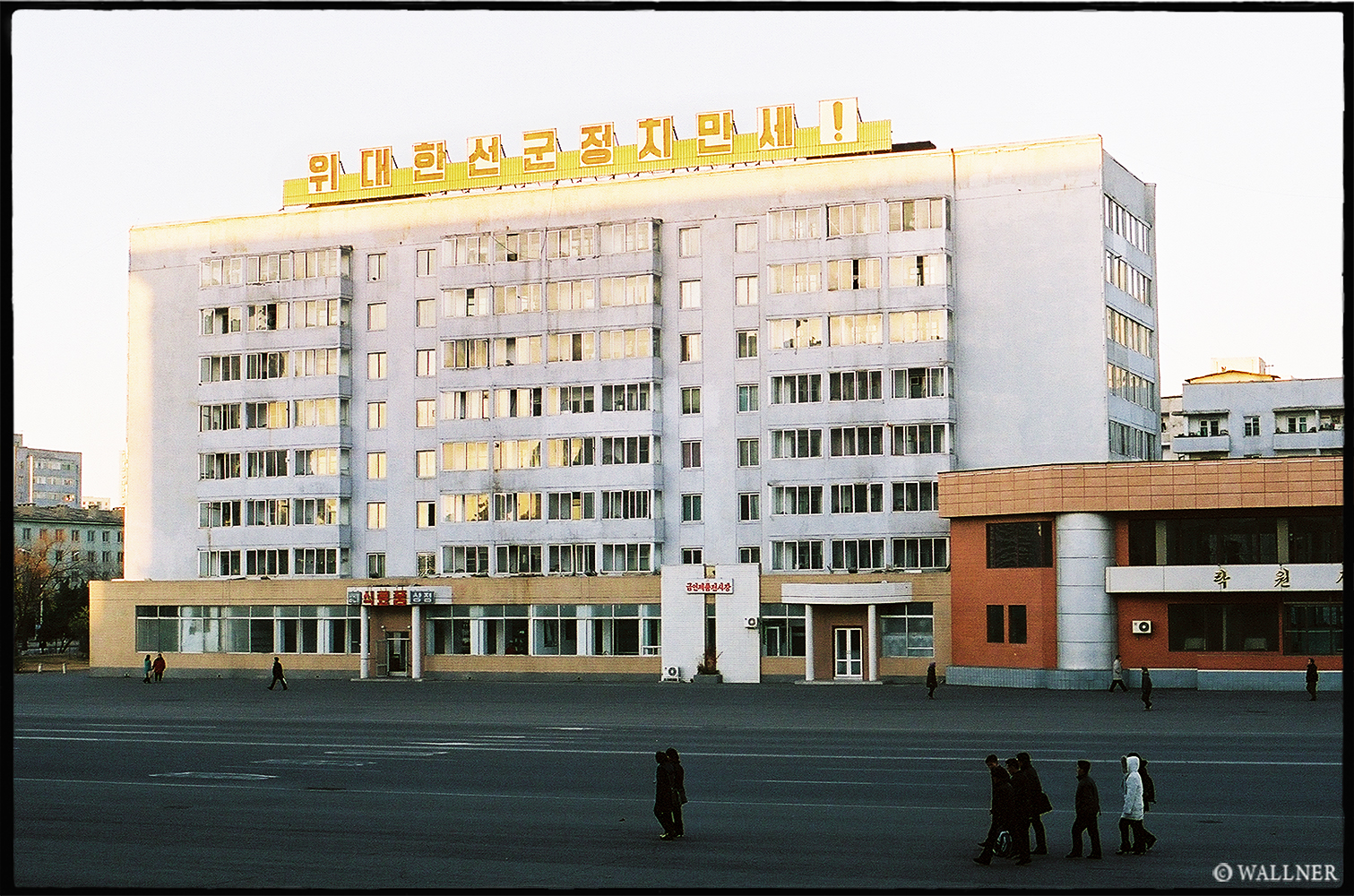 Everyone walks, owning your private car is comparable of someone owning a private jet in the west! The cars that you do see within the DPRK are either a present from Kim Jong-Il for extraordinary work done for People’s Republic, military personal, or for the around two hundred foreigners living within North Korea. The entire country holds around 25,000 cars, which means 0.001% of the population owns a vehicle, mainly imported second hand from Japan. 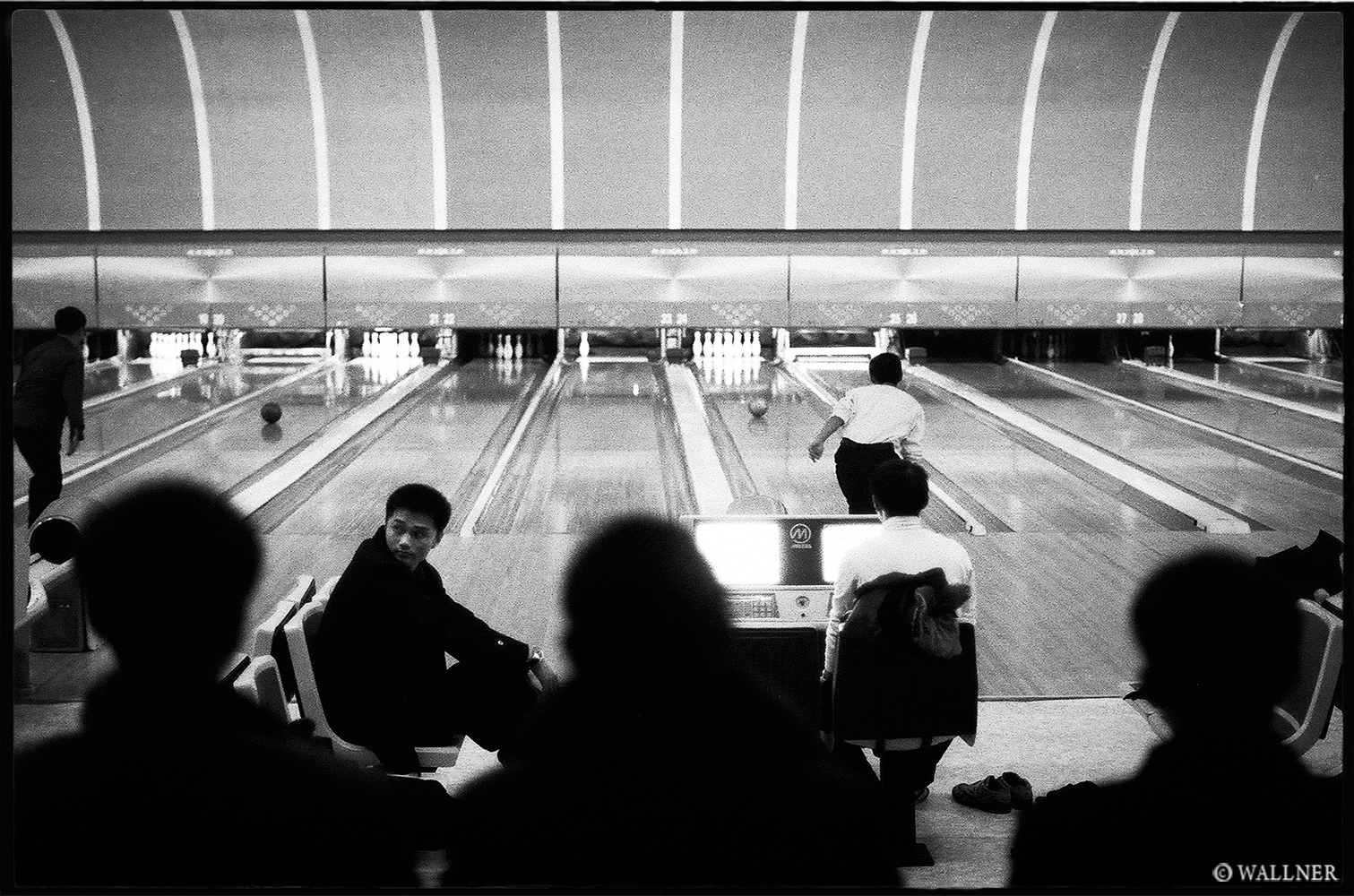 Bowling is apparently one of the pass times for North Koreans. Like many other casual activities taken to within the tour of the DPRK, its hard to tell what is staged or real. The electricity within the bowling alley was turned on a couple of seconds before our arrival, either indicating a prepared diversion of normality or just a black out… Either way, North Koreans’ average at bowling seemed to be around two hundred and above. They know how to knock those pins off the platform. 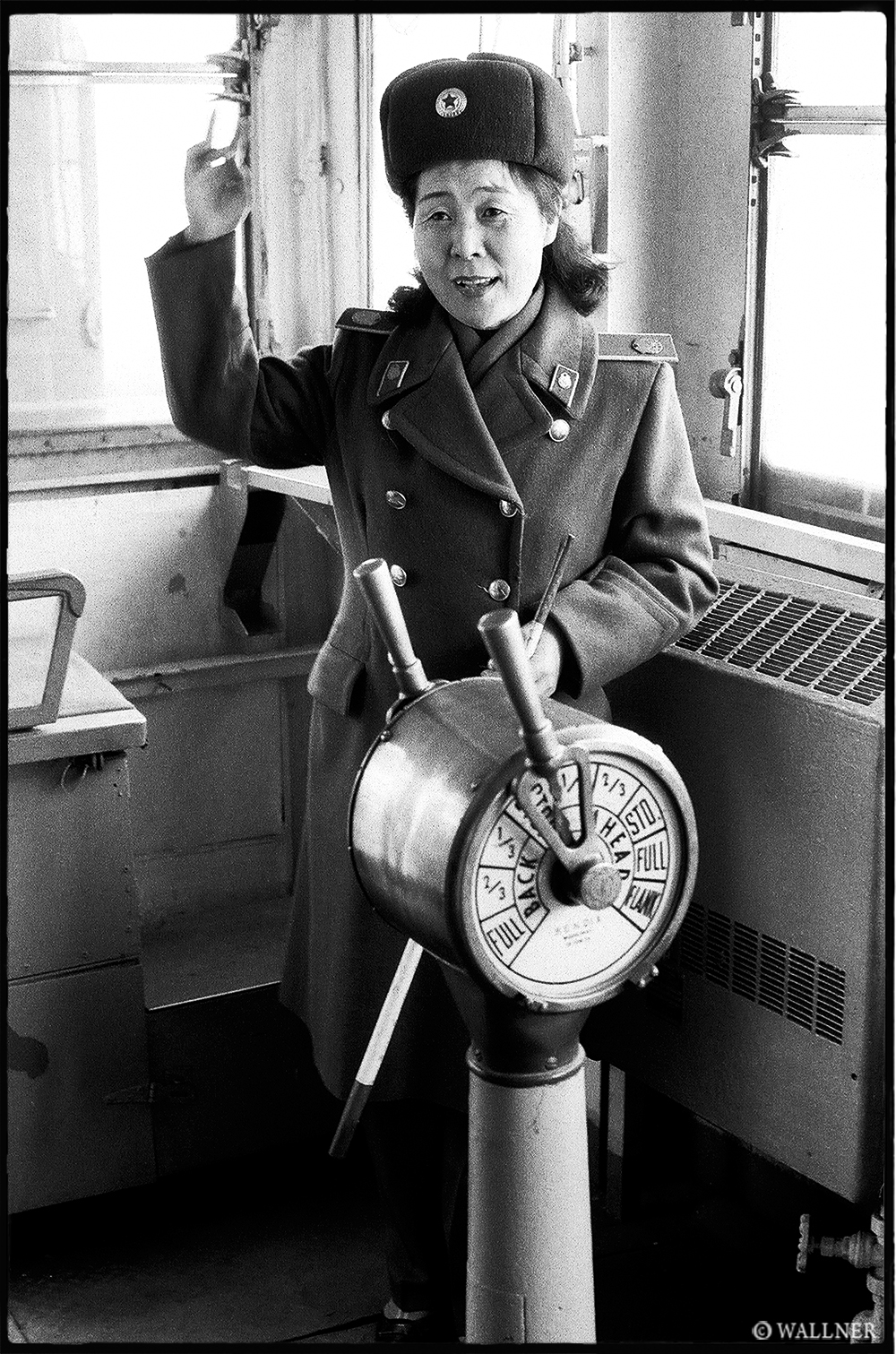 North Korea made a big catch by capturing the USS Pueblo, around the late 60′s in the East Sea (Sea of Japan). The Pueblo is still one of the only commissioned vessel of the United States Navy held by its capturer. Today, presented by the DPRK as one of the big accomplishments during the Cold War. Sixty three men were captured and held hostage till President Johnson send an apology letter to North Korea for espionage. Even though I don’t like to promote the Vice documentary of Shane Smith’s visit to North Korea, since he over exaggerates his visit to the DPRK, the monologue of the women guiding us through the ship was entirely identical to Vice’s story. 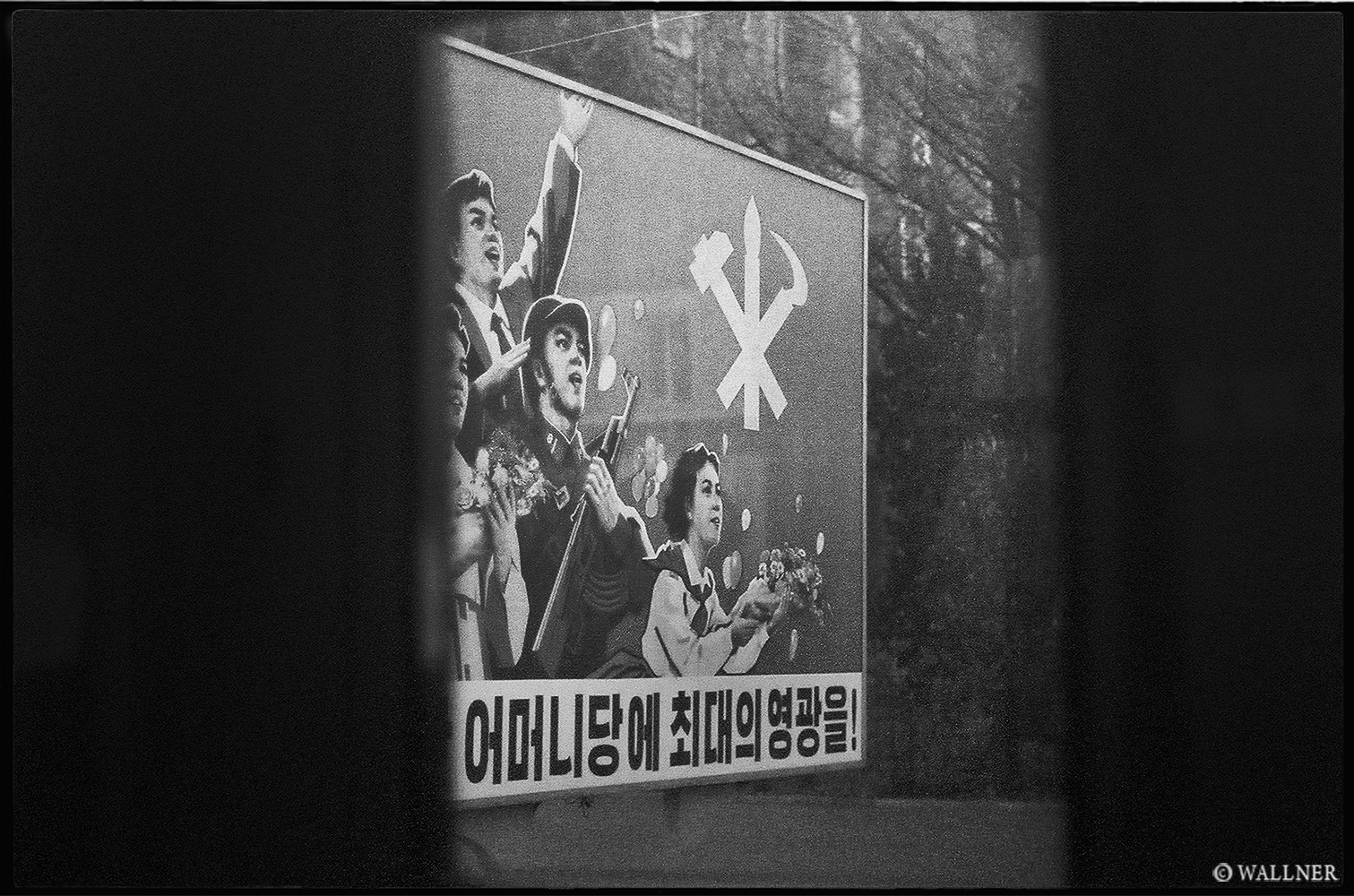 The hammer, sickle and paintbrush symbolize the unity of the worker, soldier and intellectual/artist. 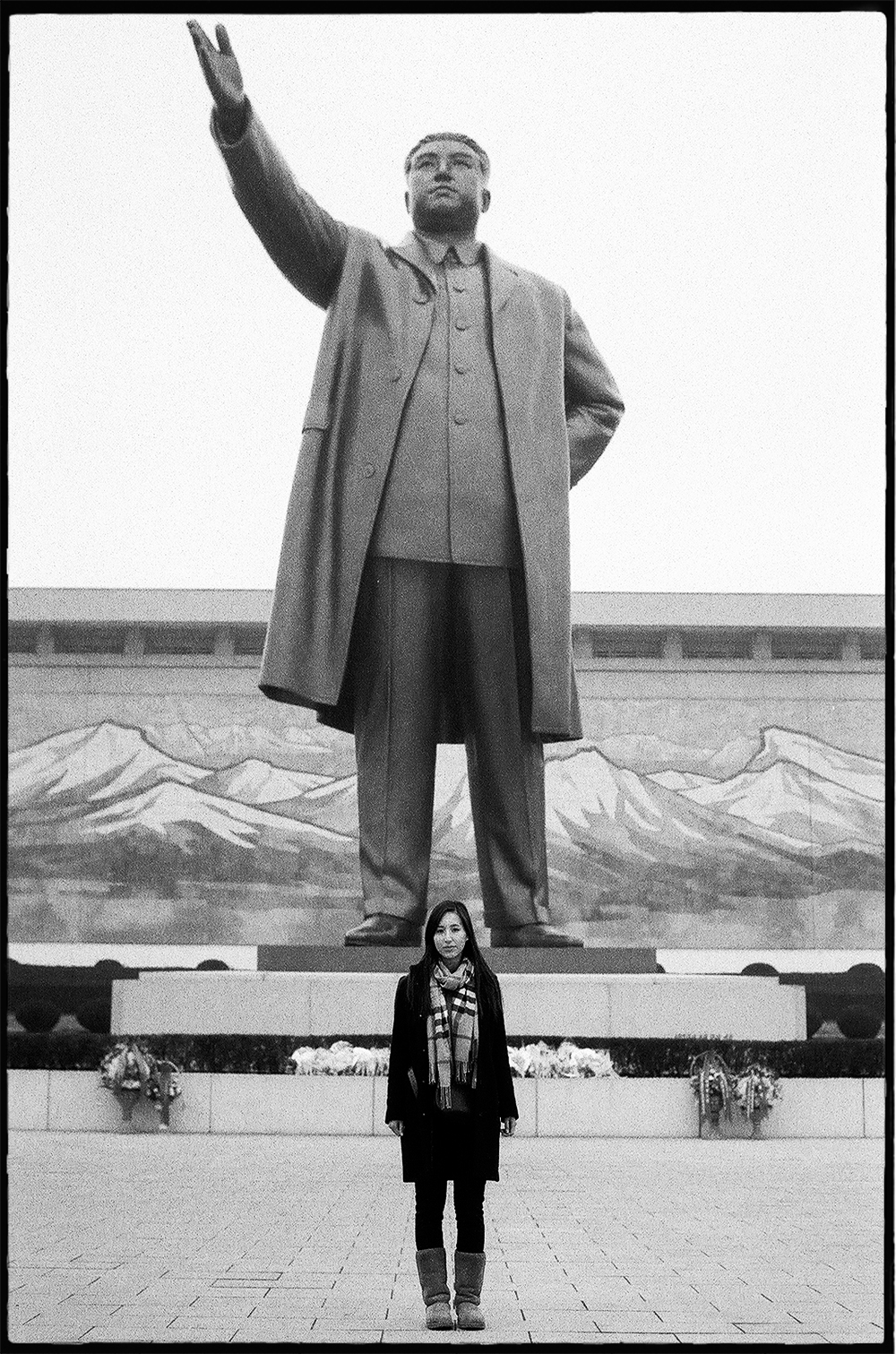 Sabine from Holland at the Kim Il-Sung statue on the day of depature.

While the Americans including Kenny were forced to exit the DRPK by plane, everyone else was allowed to take a fourteen hour train ride back to Beijing through Shenyang. 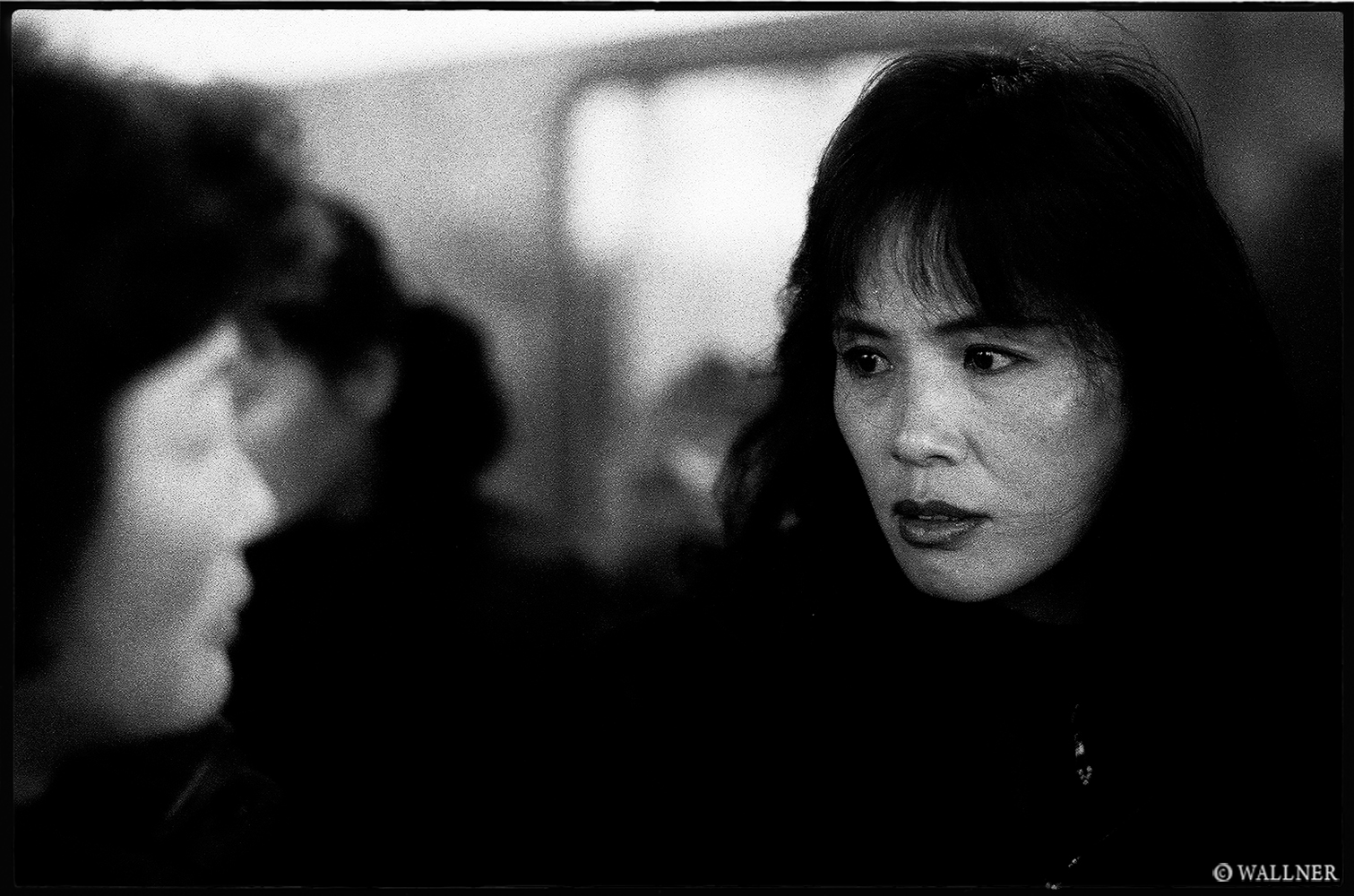 Out of the four day trip within the DPRK, I don’t think I had a better opportunity to shoot photos up close than the final ten minutes at the Pyongyang train station before our departure to China. The mood and tensions one can capture of loved ones saying good-bye to one another at locations like airports or train stations is such a powerful tool of portraying expression between human behaviour.

Annyong-hi kyeshipshio (good-bye) North Korea! I spend a fortune to come here, but don’t regret a cent. I can’t wait to go back in the near future, and just hope the best for a reunification to become reality. 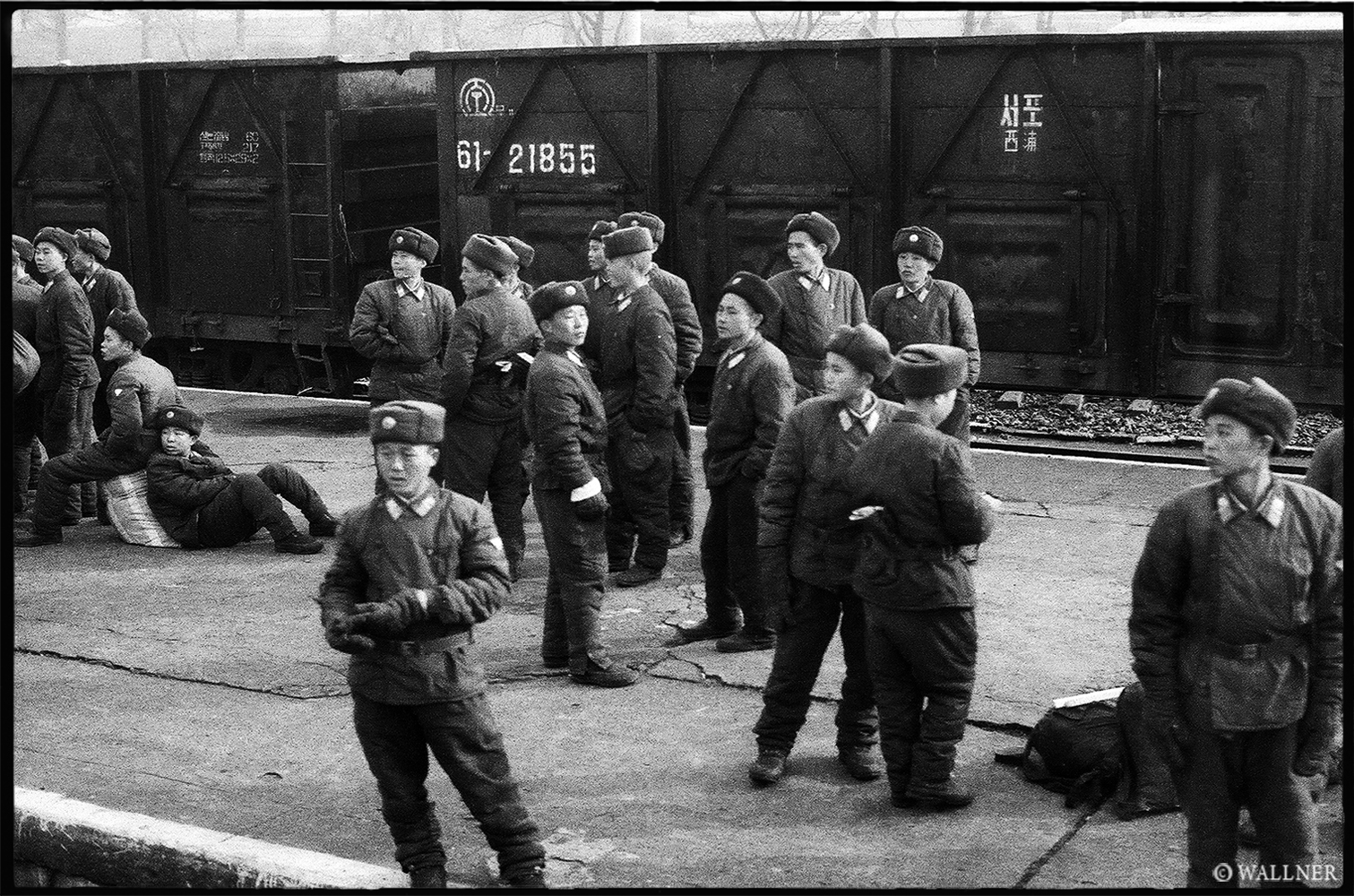 I wish I had a sequence of this moment, but I don’t. So I hope words can justify the dread. Seconds after I shot this photo, the officer on the far left pointed at me with great anger, meaning it is illegal to take photos out of the train. A law I knew but risked anyway to capture the atmosphere while the train rested for a couple minutes in Anju, a big city north of Pyongyang on the route to mainland China. Right after I saw that he caught me taking the photo, I quickly lowered the camera and gestured a sign of apology. However Sabine, one of the dutch friends in my cabin didn’t quite catch the prologue, and raised her digicam to take a quick photo. The officer now catching two people taking photos, provoked the law and security of the DPRK. He furiously took out his pen & notepad and probably wrote down the cabin number. Everyone’s hearth stopped for a second, we knew we were in for some trouble. I franticly changed my roll of film, and everyone took out their memory stick of their digital cameras to hide quickly in case we get searched. Luckily the train set its path onwards a good minute after our harmless shot was taken. All of us were pretty scared when we reached to Chinese border, since we knew that a security check through all your belongings was mandatory. They made us take out all our camera gear and lay it on the table, and then an officer skimmed through all your photos taken with your digital camera. Everyone was able to hide their memory sticks quite well and I got lucky since I mainly just had rolls of film which was rather observed with a confused look than as a threat. I was really stupid though to bring along a book called ‘A way of Escape‘ featuring a biography of a Christan who escaped the Ceauşescu dictatorship. The officer took the book out of my luggage and started reading the first couple words and named the author. He gave me a very vicious look and scared the shit out of me. If you happen to go to North Korea, don’t take any literature with you relating to escapes, dictatorship or religion, that’s one lesson I learned. 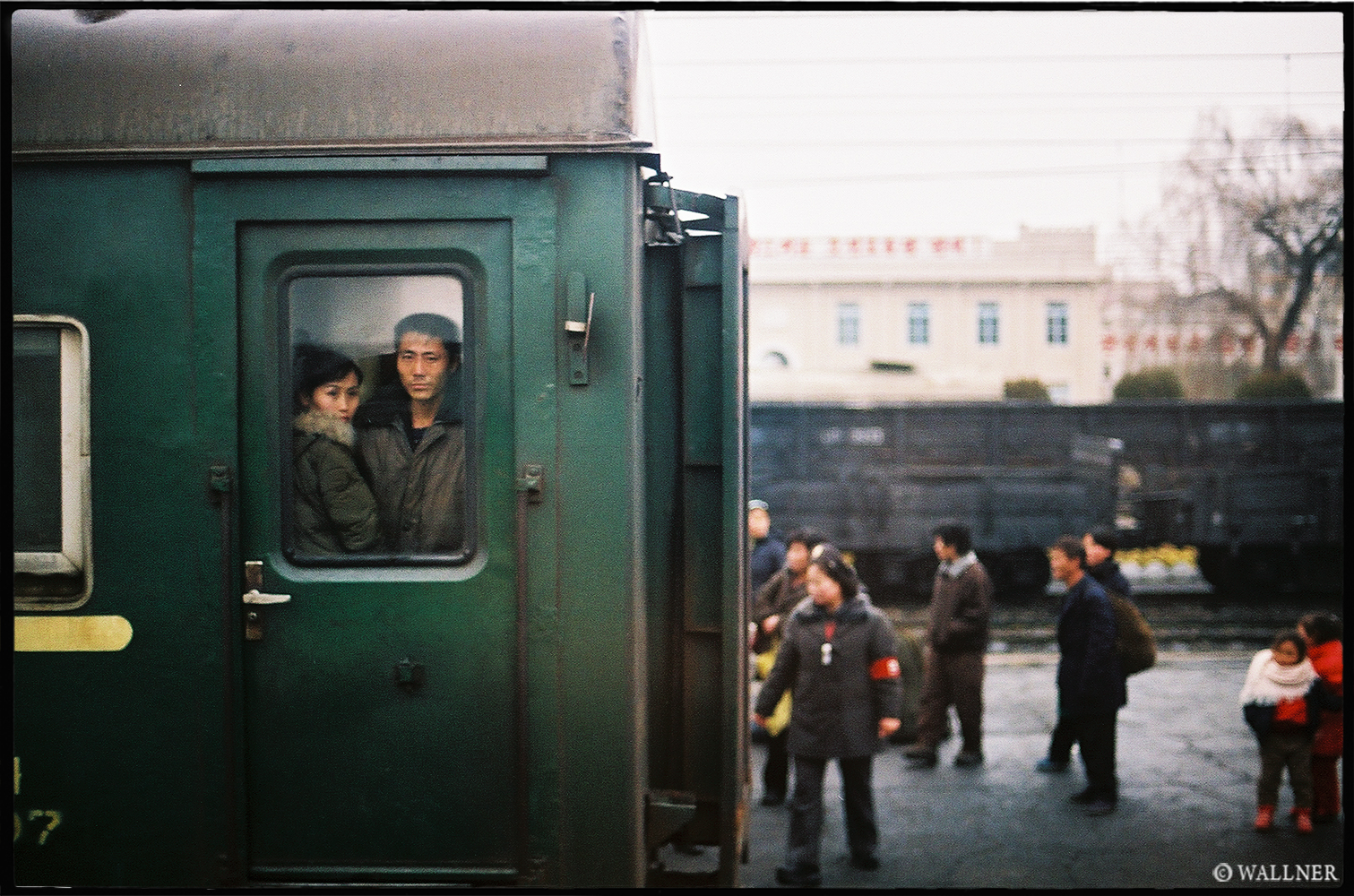 Train rides feel like an essence of freedom, being able to expand borders and get a visual picture of what’s outside of the box. Only problem is when the box doesn’t have windows and forbids you to leave…