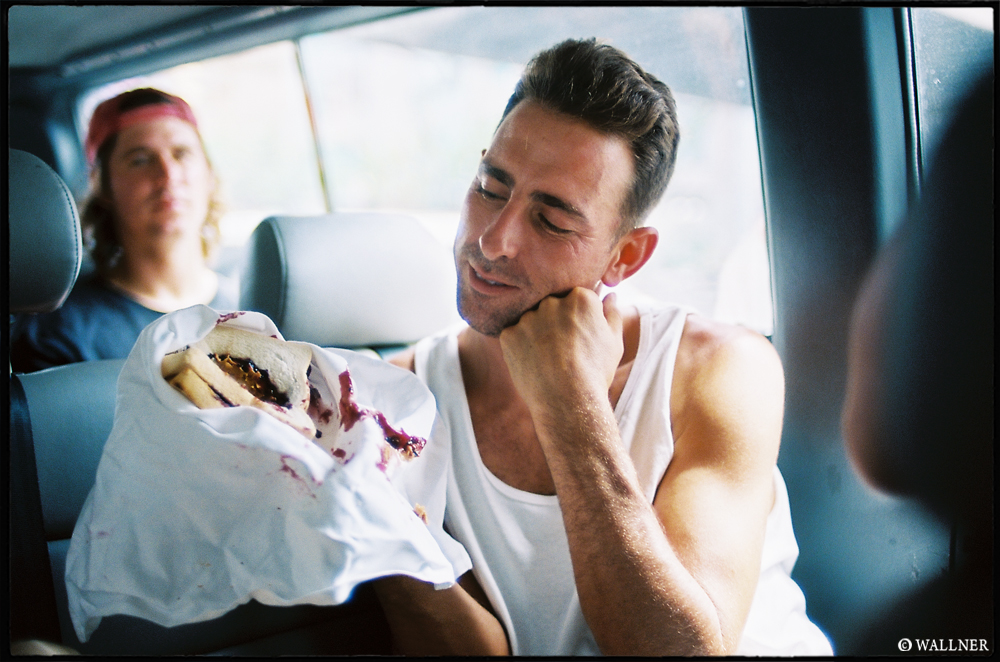 I found myself wondering the streets of Doha and a week later sitting in a van with Guy Mariano who can’t quite decide if he wants his breakfast from the morning prior. ‘To Diarrhea or not to Diarrhea?, that is the question!’. 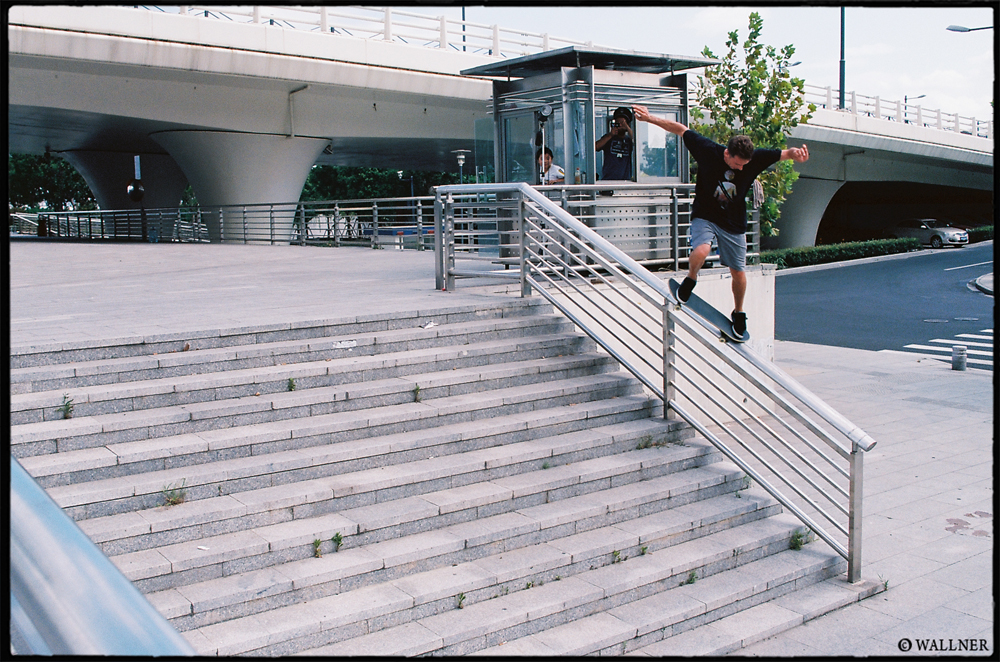 Straight out of the van crooks on slanted handrails. Guy is possibly the best skateborder I have ever witnessed. 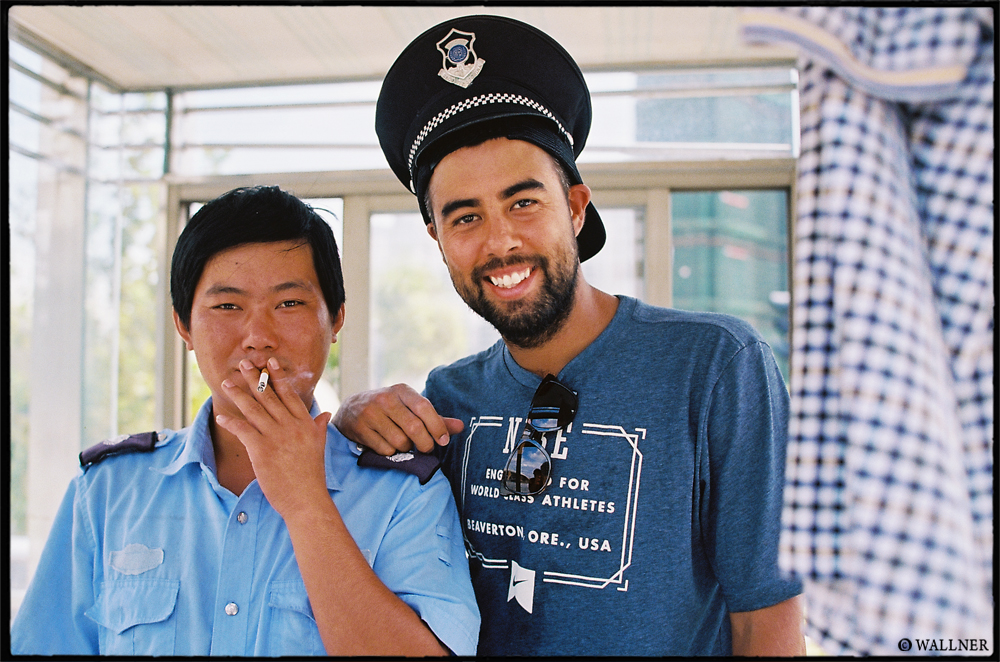 This security guard from Shanghai on the left might have no idea that he is posing with Mister Eric Koston himself. 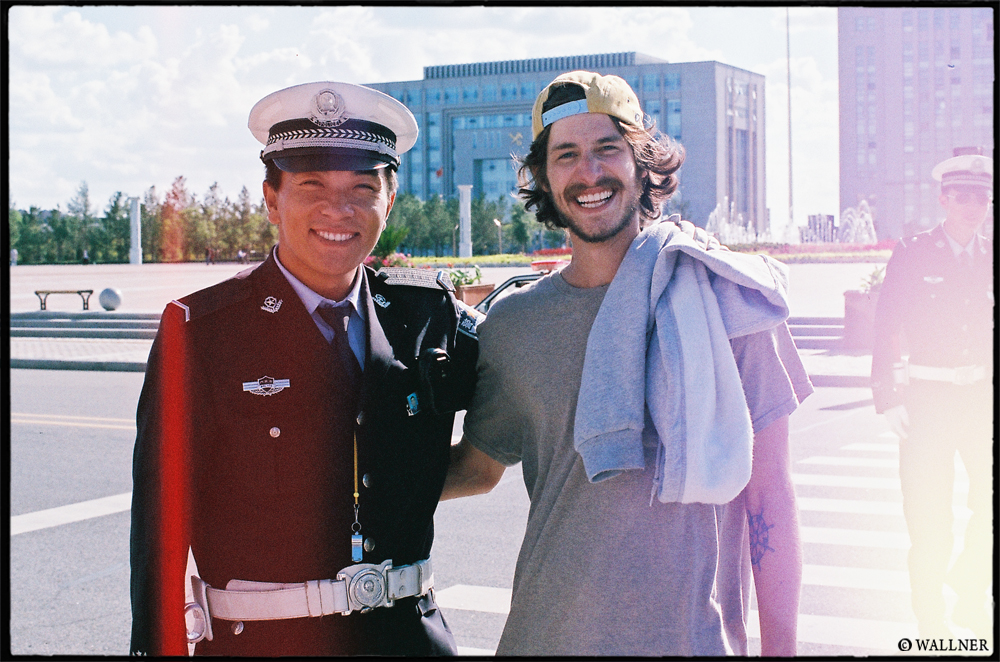 Even a week later I find myself taking more homie shots between authority figures and skateboarders. This time its Jay Meador (slightly exposed because of the open film canister) with a friendly policeman who was exhilarated to talk to humans in the ghost city of Ordos. 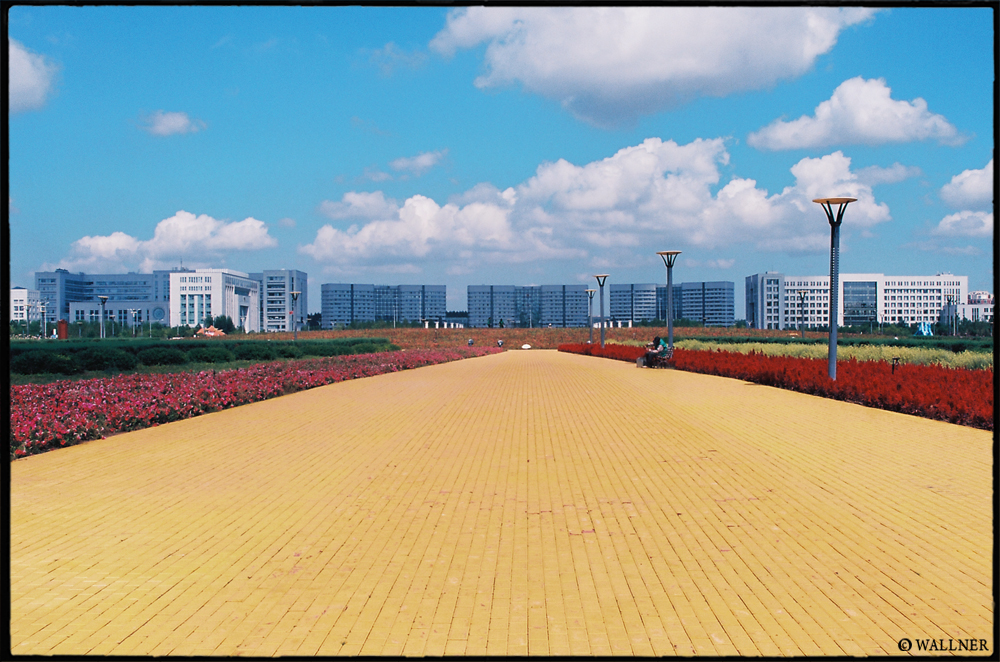 The city of Ordos was build with the effort to raise the GDP of the People’s Republic of China. Over 120 billion dollars was spend to inhabit a city of over a million people. In the end only a couple thousand people live in this empty city at the moment which got labeled as one of the few ghost cities as well as a paradise for skateboarding according to a bunch of forum bloggers after watching our clip of Ordos which Charles Lancelpaine put together. 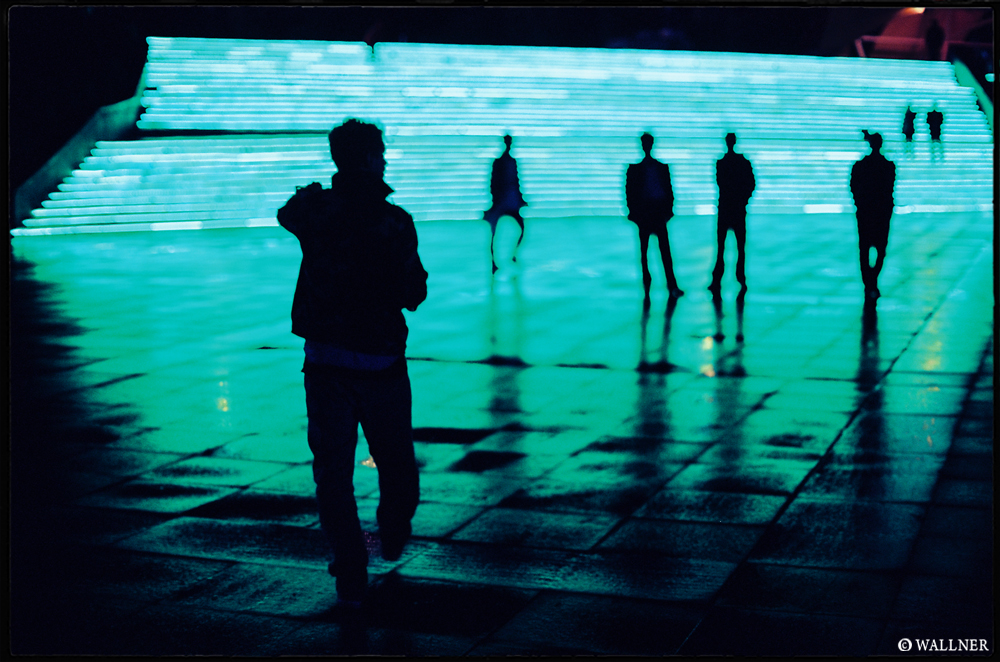 In the search for tickets for the 2nd Ordos International Nadam Festival Sports Competition. 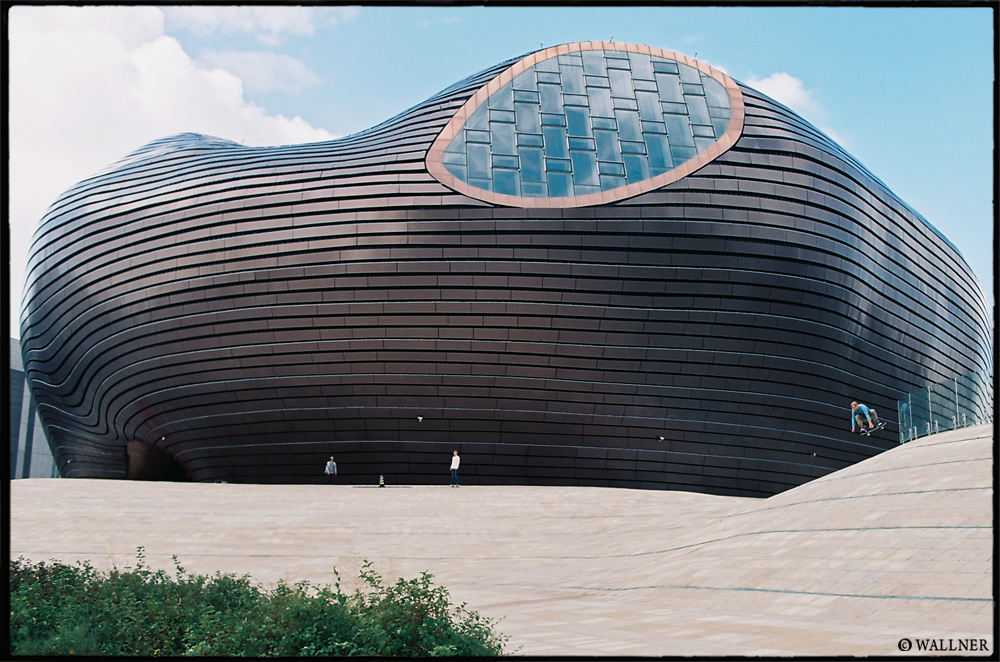 Boneless in the middle of nowhere. 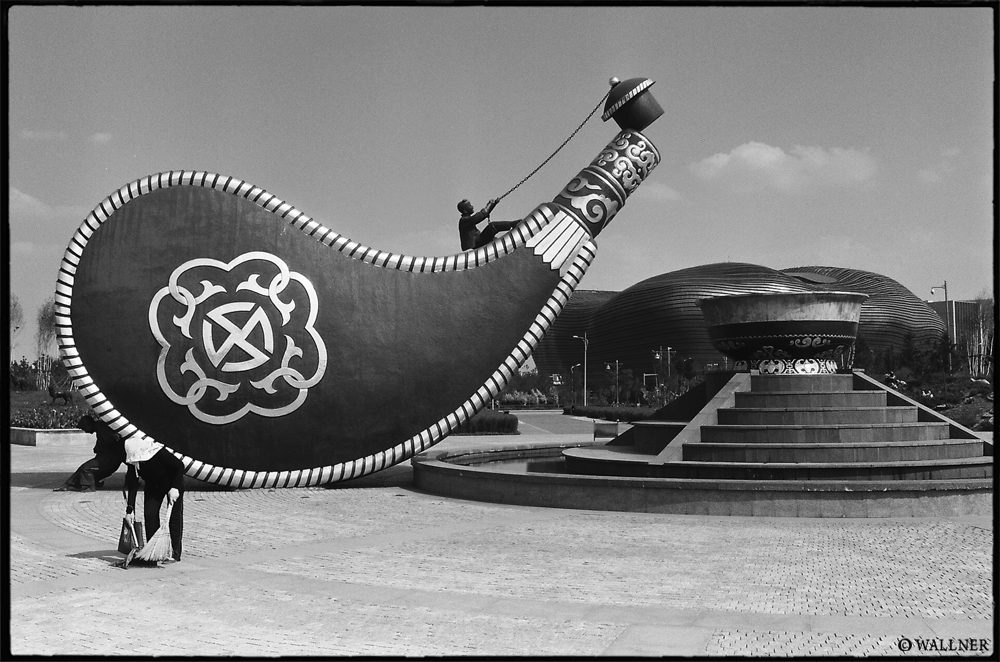 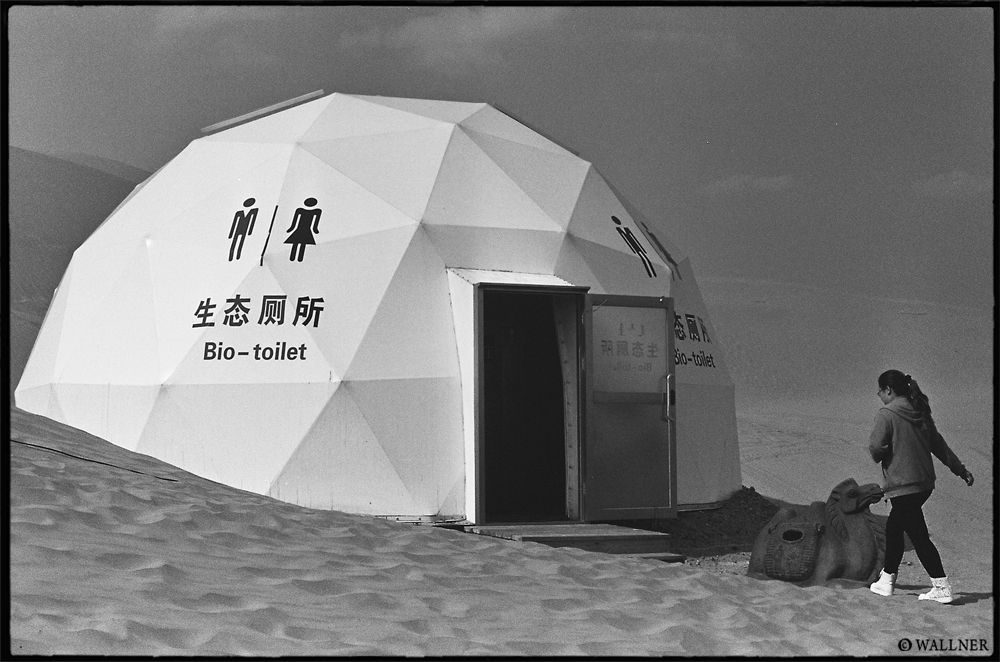 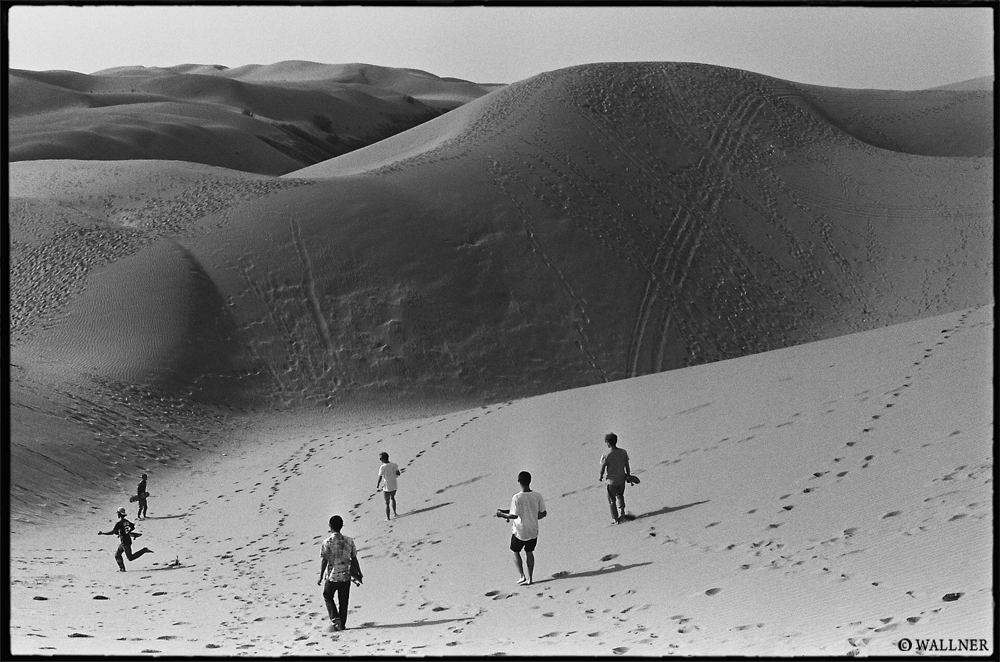 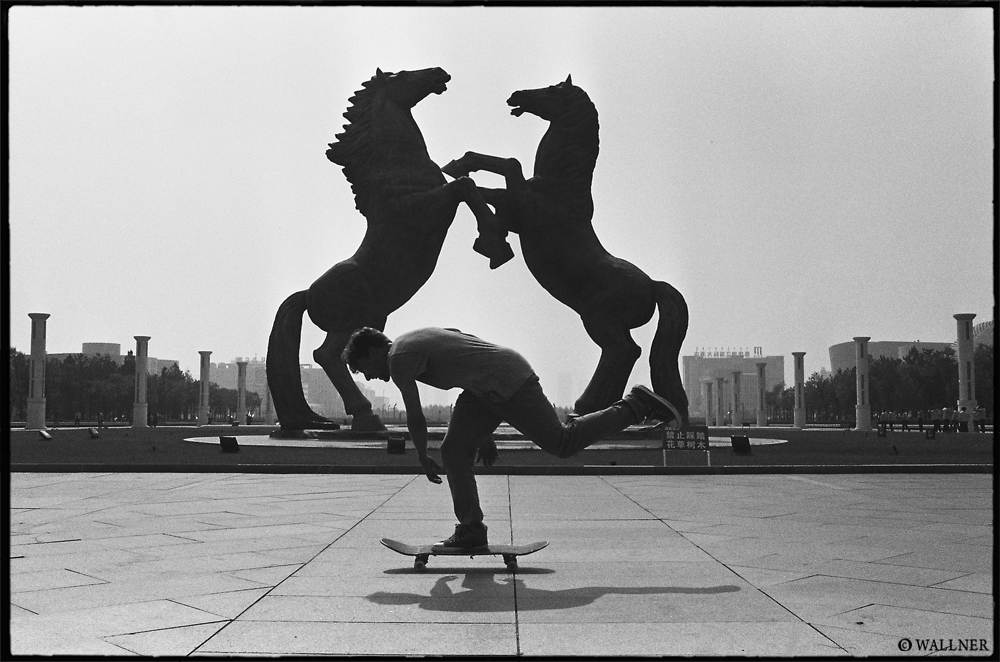 Like one can tell, this city was quite deserted when compared to an average Chinese city. That being said, there are still people there, but its not hard to find a moment when none are visible. Pushing through empty streets has its charm as Eliott Zelinskas performs here. The Ordos trip was filled with fun (thanks to playing UNO), and was a pleasure to travel with the Shanghainese homies, how about checking out Awaza the Ordos of Turkmensitan next?! 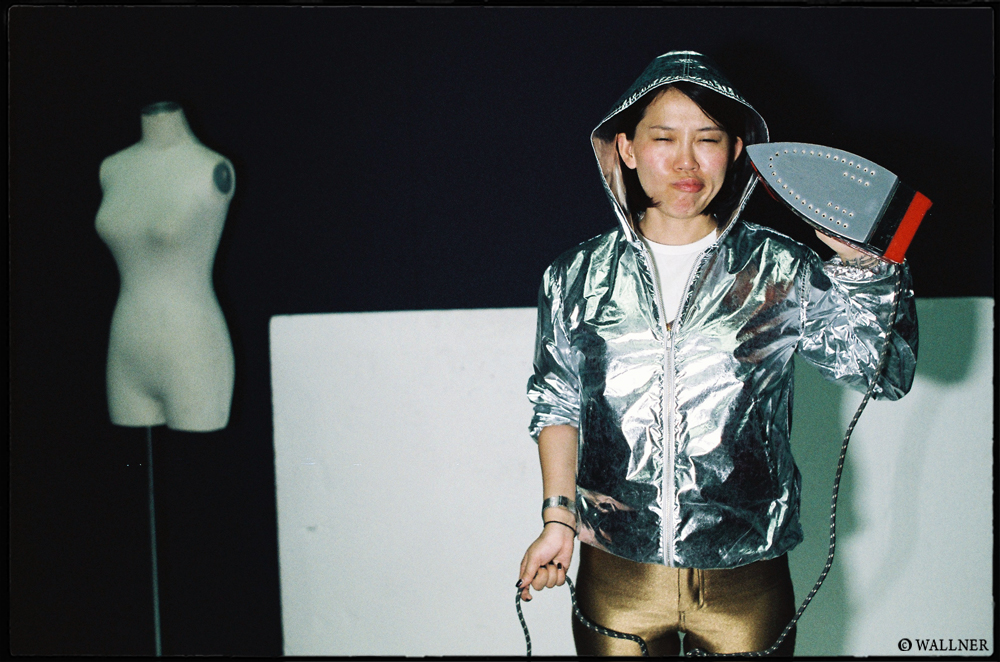 Back in Shanghai I was put on a rather unusual project by Converse, instead of portraying their shoes in a clean & tidy fashion. I was given the task to wear out & destroy the famously known Chuck Taylors. Nikki at Converse, was stationed as one of my accomplice in this dirty mission of pretty much dropping tons of items on these sneakers. 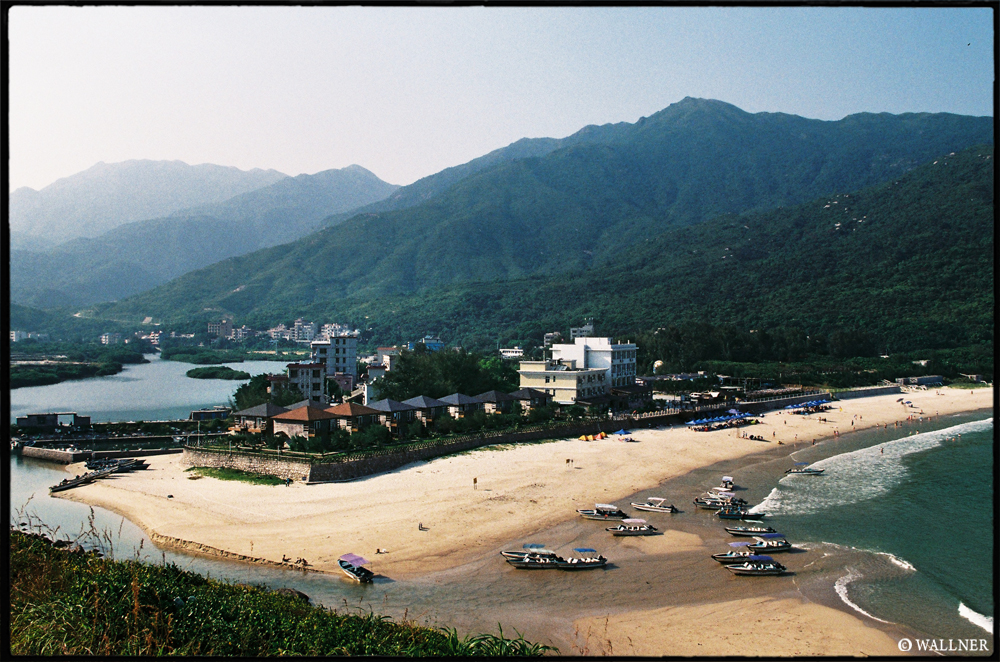 Its quite bewildering that even bustling Shenzhen has a harmonious escape. Vagabond was holding their annual Hobo Days tradition, which consists of a weekend getaway from madness. The Vagabond team and myself got flown down to Guangdong to take part in this zen-finding experience. Charles and I filmed the clip while the guys were skating, surfing, eating seafood and just living up Horace’s idea of carpe diam. 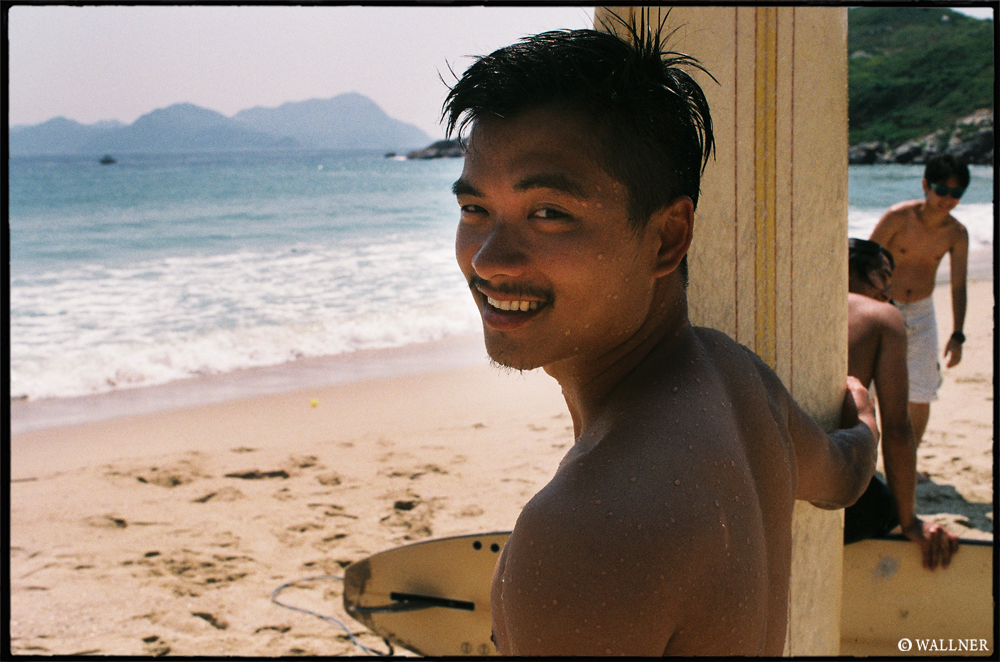 Alexander Hwang is moving to San Fransico to give the American Dream a go. The grass might be greener on the other side, but the Pacific Ocean is the same. 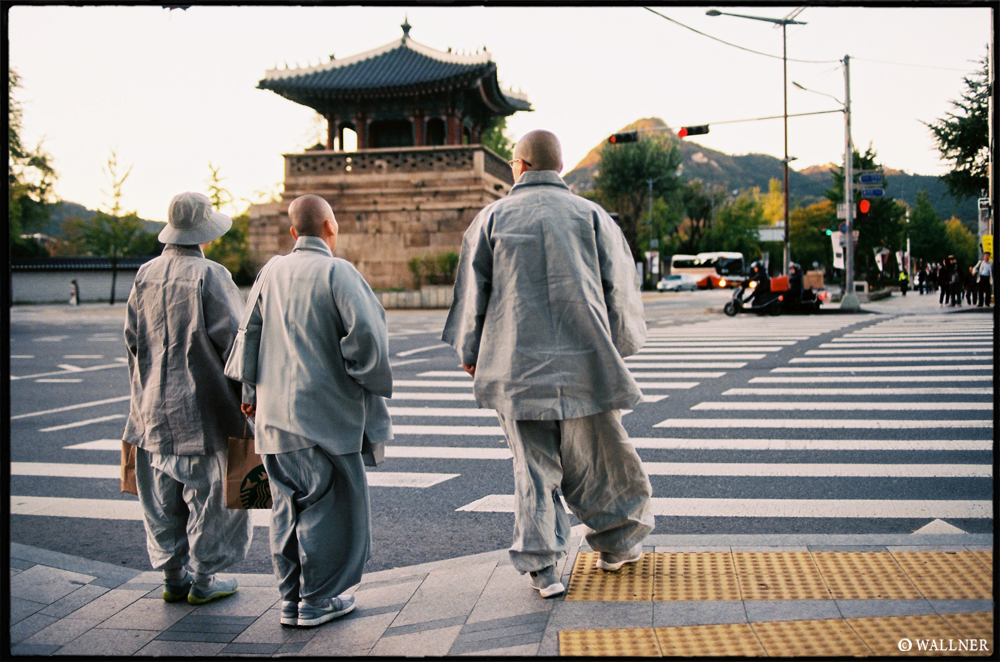 Shorty after finishing the Converse & Hobo Days Projects, the deadline for the ‘Meet The Stans‘ premiere was creeping closer and closer. I was stuck for days with Charles editing in the post-production dungeon on Julu Lu, the hearth of the French concession of Shanghai. The premiere deadline was met & the evening was utterly joyful with all the friends from Shanghai and visitors from Russia, Mexico, Sweden present. Soon after, the time has come to give Korea a visit again, to see some old friends and hold the second premiere, but also the first for me on the Peninsula. 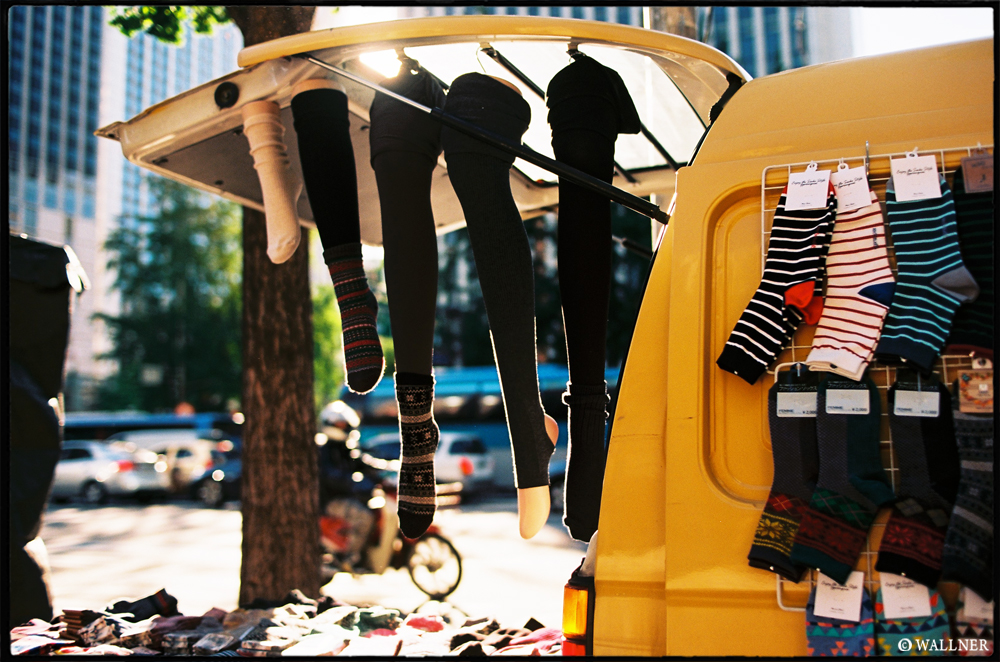 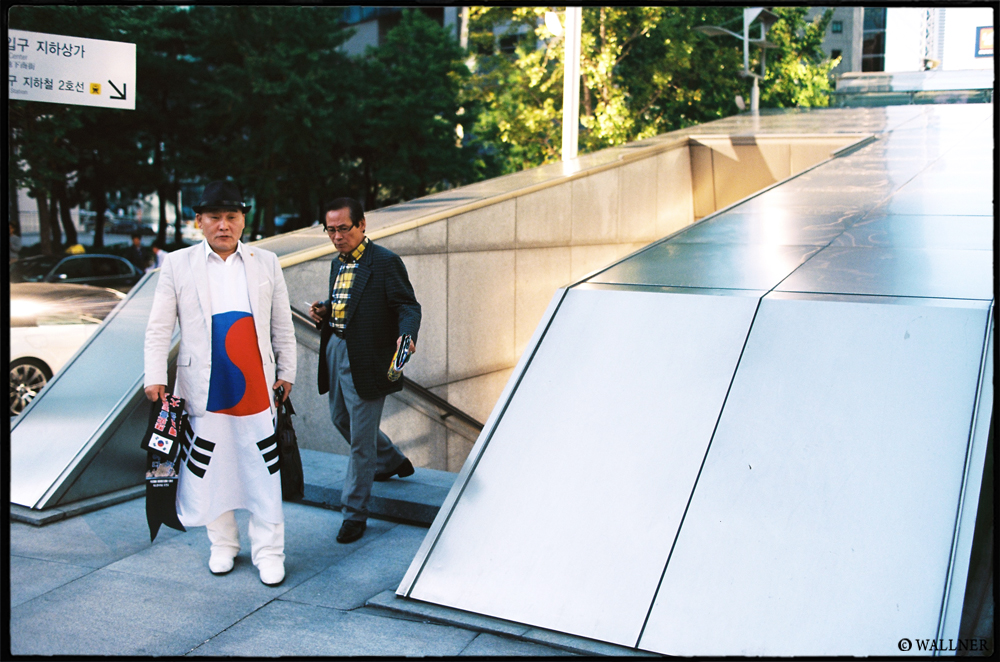 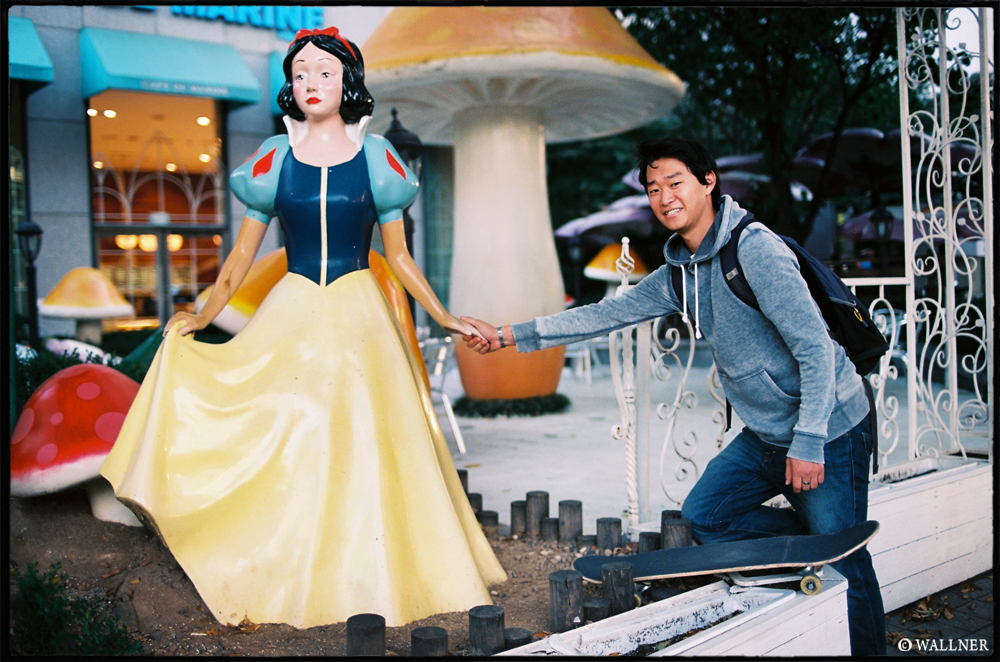 Snow White not having the yellow fever. Danny has relocated himself to the Korean Peninsula in the hopes of learning their language which he has been anxiously desiring and been talking about for years. Dan I and used to be on the road a lot while filming for my first video ‘Translations‘, it was more than a pleasure to catch up and film some new maneuvers during my short stay in Seoul. 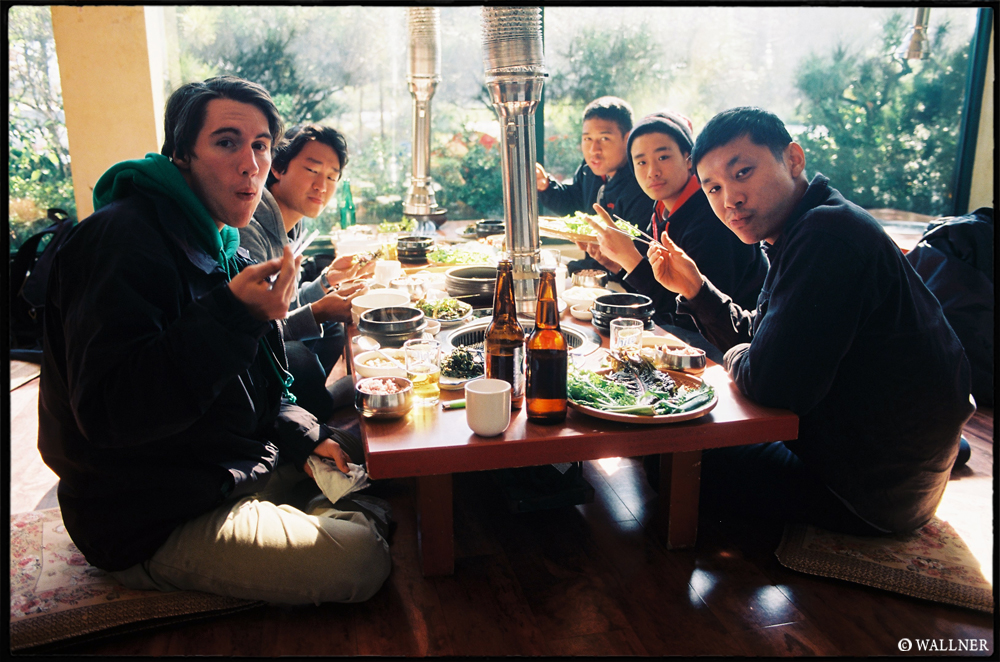 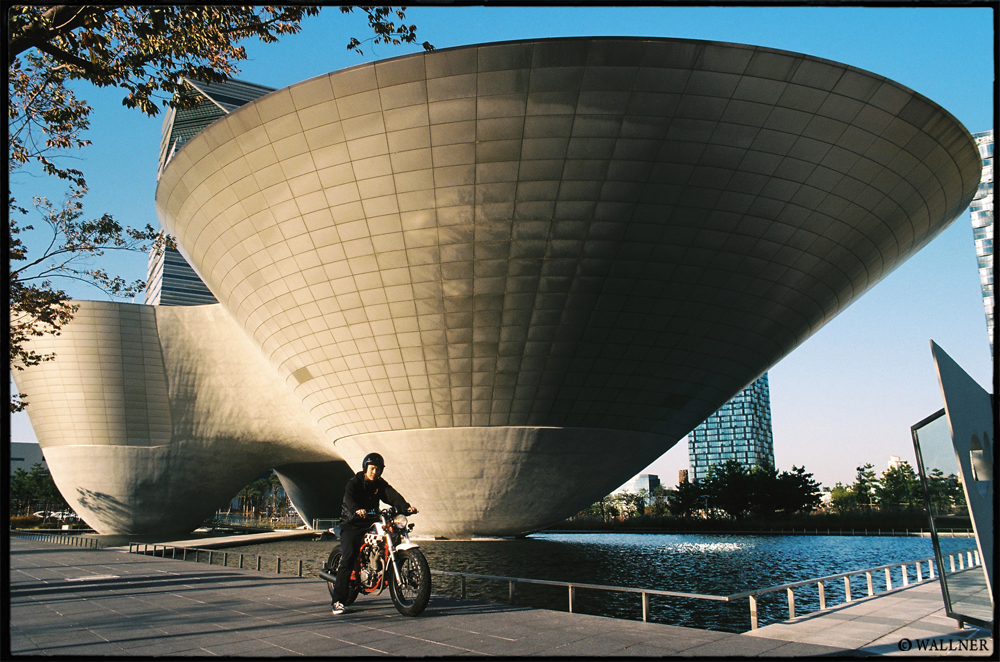 Songdo is the answer to Shanghai and Dubai from Korea. Barely even eight years old, this build from scratch 600 hectares free economic zone which cost over forty billion dollars to build is embedding tons of skateboard spots which the Kadence team can’t be turning a blind eye to. 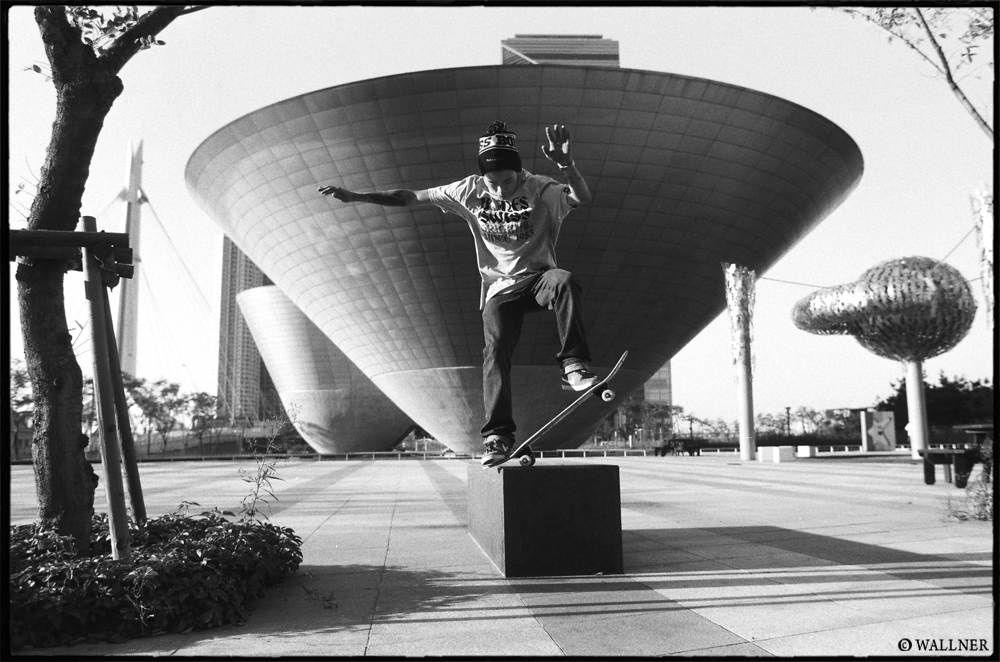 Jason Choi bluntsliding Area 51 like ledges in Incheon. Jason just recently migrated back from the East Coast of America to the Korean peninsula, where I am pretty sure he will play a big role in the development of this sport for the upcoming decade. With his humble approach and talented feet, he will make Korea proud one day. 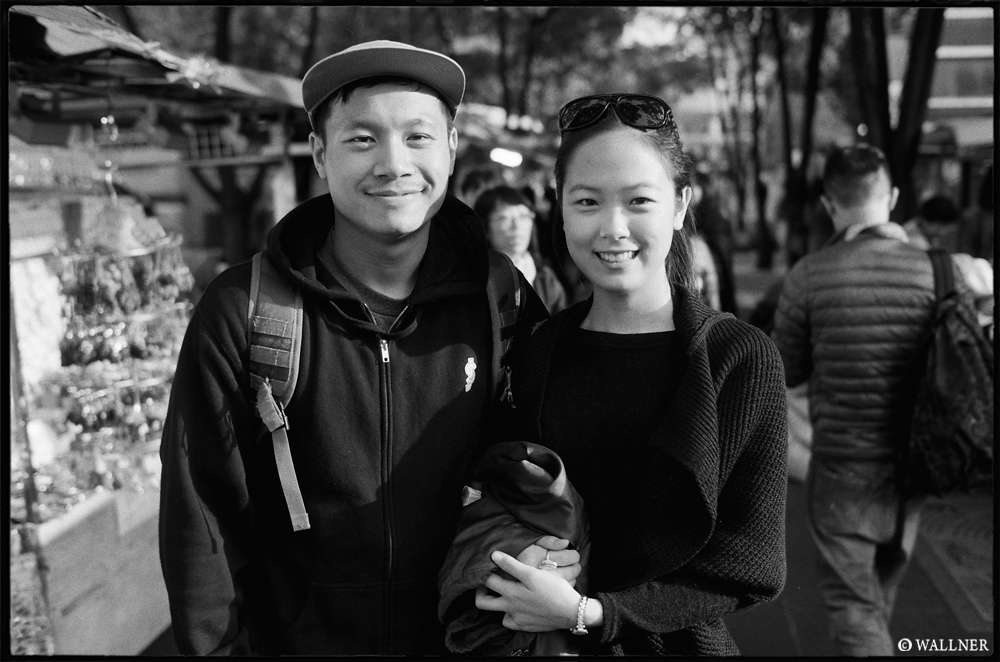 Thanks Phil & Hae Na for the hospitality. Thanks but also no thanks for introducing me to Gangnam Style. 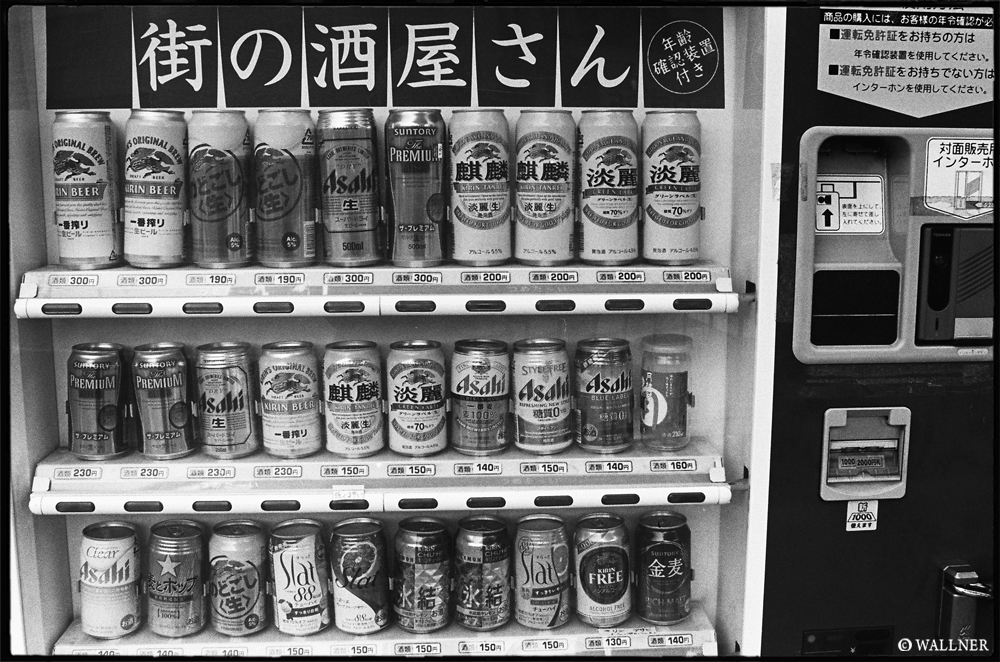 Next stop on the premiere trip around Eastern Asia was the land of the rising sun, 日本 (Japan).