We have bodyguards in Afghanistan

Our final destination through Central Asia and along the Silk Road was meant to be Turkmenistan. Two days before leaving Tashkent to head south, closer to the most secretive and bizarre ‘stan out of all the stans, I received an unexpected e-mail from our Turkmen tour agency who issued our visa on arrival and would guide us through Turkmenistan. The e-mail started of with a paragraph explaining that the person in charge from a week ago got fired and that “As is obvious from your website, your scheduled trip is of the professional filming type rather than leisure. Given all professional filming and journalist activities must be co-ordinated via the Ministry of ForeignAffairs of Turkmenistan, embassy in your home country, or embassy of your home country in Turkmenistan, we are not entitled to supply any services to you until you discuss your project with relevant authorities as well as acquire service type visa and all corresponding permissions from the Ministry of Foreign Affairs of Turkmenistan. As a tour agency, we can organize tour services for leisure travellers, rather than mass media professionals casting films for further sales or broadcasting.” Turkmenistan was not feeling Visualtraveling, but Afghanistan was!

On our day of arrival in Uzbekistan we were greeted by Arthur and Abdullah. Both of them went out of their way to help us deal with the difficulties of finding an apartment, exchanging money at the black market, get registered, get cellular Sim cards, find a bank that does visa verified deposits and about two million other little errands which were necessary to accomplish. Our friend Abdullah was born in Afghanistan but has been living in Sweden and Uzbekistan for the past years. During our dinner on arrival to Uzbekistan he invited us to Afghanistan. We just entered Uzbekistan and knew we had to go to Turkmenistan next, so the detour of going to Afghanistan, the country which has been fighting western powers and the Taliban didn’t seem like the safest or amusing place to end a six week trip through Central Asia. Once we got denied to Turkmenistan, we felt we had an obligation to keep going and with the convincing influence from Abdullah, we found ourself heading to Mazar-i-Sharif. 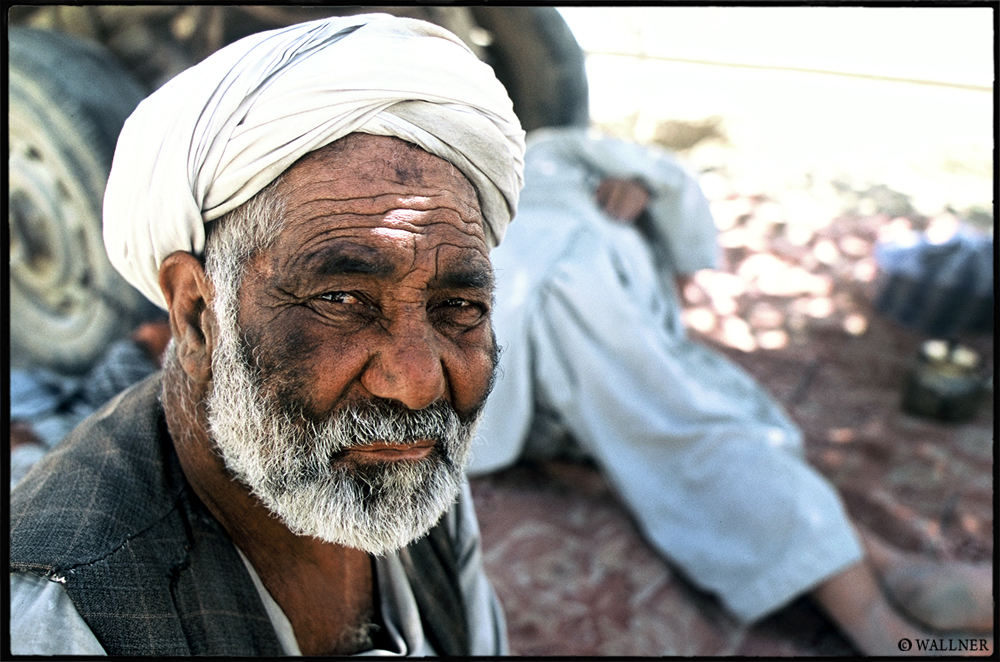 Crossing the Freedom Bridge from Uzbekistan to Afghanistan felt like day and night. I don’t think I have ever crossed a boarder where the contrasts between a separating line are so great that you can’t stop getting goose bumps from excitement (with the possible exception of the 38th Parallel separating the two Korea’s). The crossing point between ex-sovietism to an Islamic Republic was immense in diversity, especially the clothing, language, scenery. 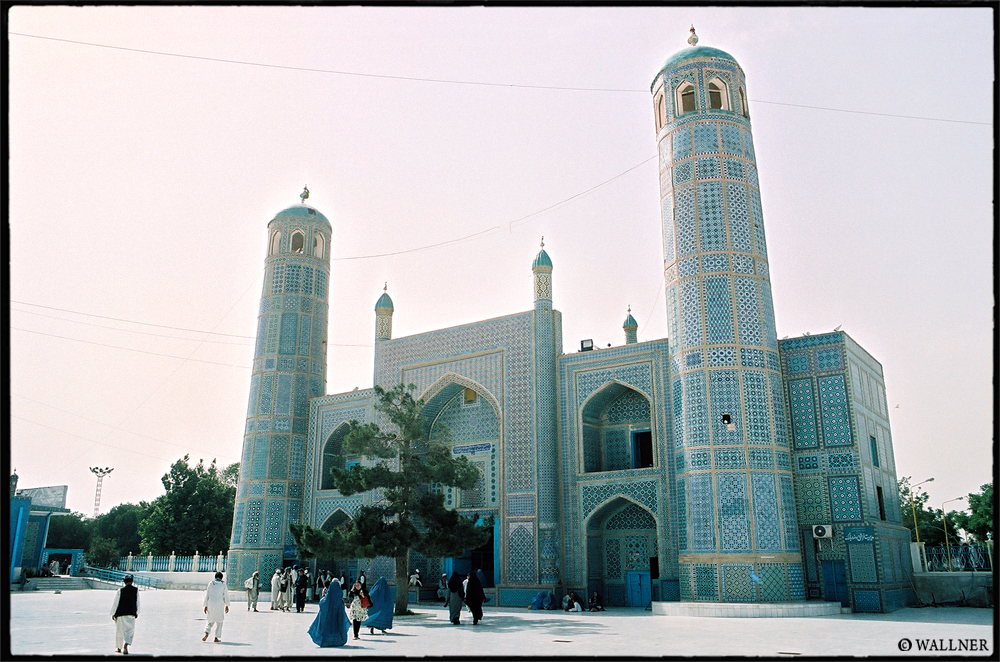 While travelling through Uzbekistan, we witnessed the beauty of some mosques especially in Samarkand. The Blue Mosque or the Shrine of Hazrat Ali must have been the most magnificent piece of architecture that I have seen with my own eyes. Not just the beauty made it exceptional, but taking in consideration that Ali, the cousin and in-law of Mohammed is reputed to be buried at this Blue Mosque makes it quite a significent place for Shia Muslims. 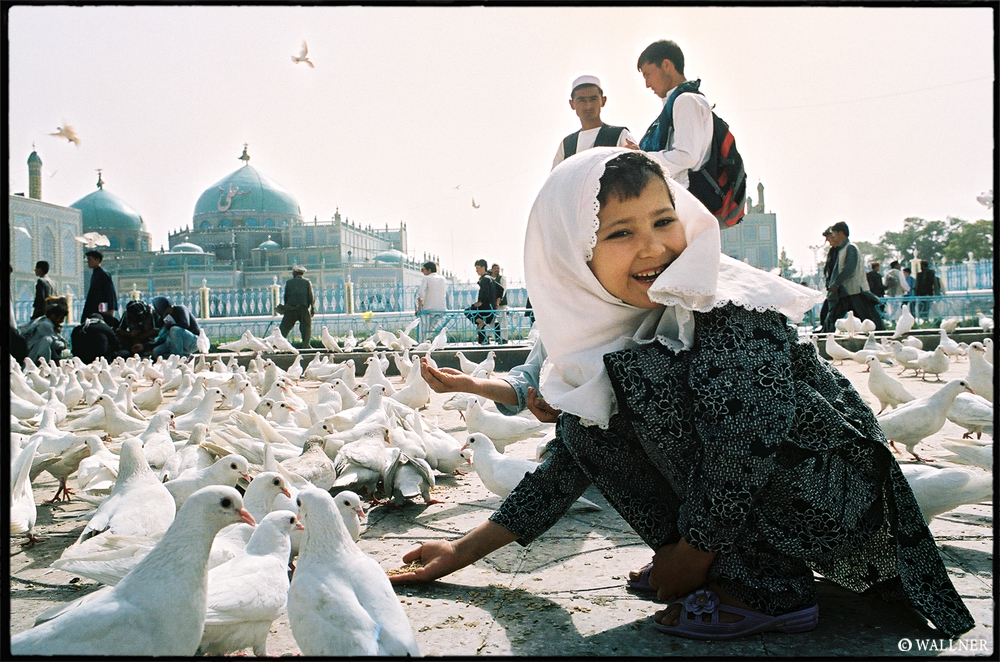 Not sure what Ghenghis Khan had in his tea each morning when he woke up bombarding through Asia and destroying other civilizations. Khan and his Mongolian entourage destroyed the Shrine around the year of 1220. 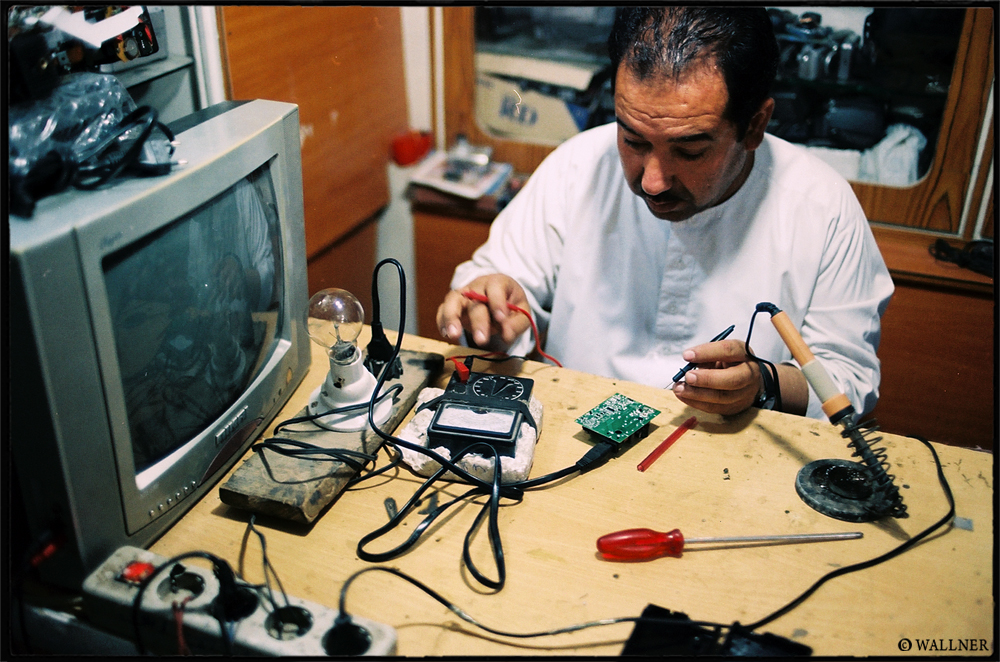 Technical difficulties are unavoidable, but it can be a nightmare when your battery charger’s fuse gets knocked out by a big dosage of Afghan Amperes. I was worried, Afghanistan doesn’t really have access to modern cameras or camera accessories. When Abu took me to a small shop to have my charger fixed, all I saw were analogue cameras or huge TV cameras which were equivalent to the US market from 1998 or early 2000s. Never the less, the man pictured, guaranteed me that he can do some magic and have it fixed for me within an hour. Saved the documentary. 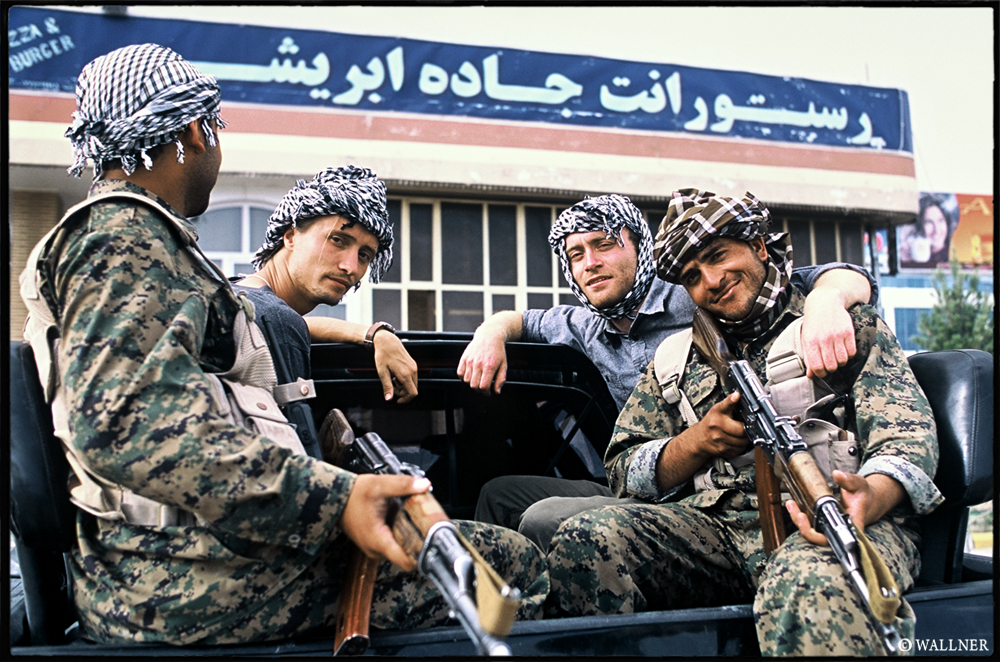 The guys riding in the back with our bodyguards who slowly became our friends even with a huge language barrier. 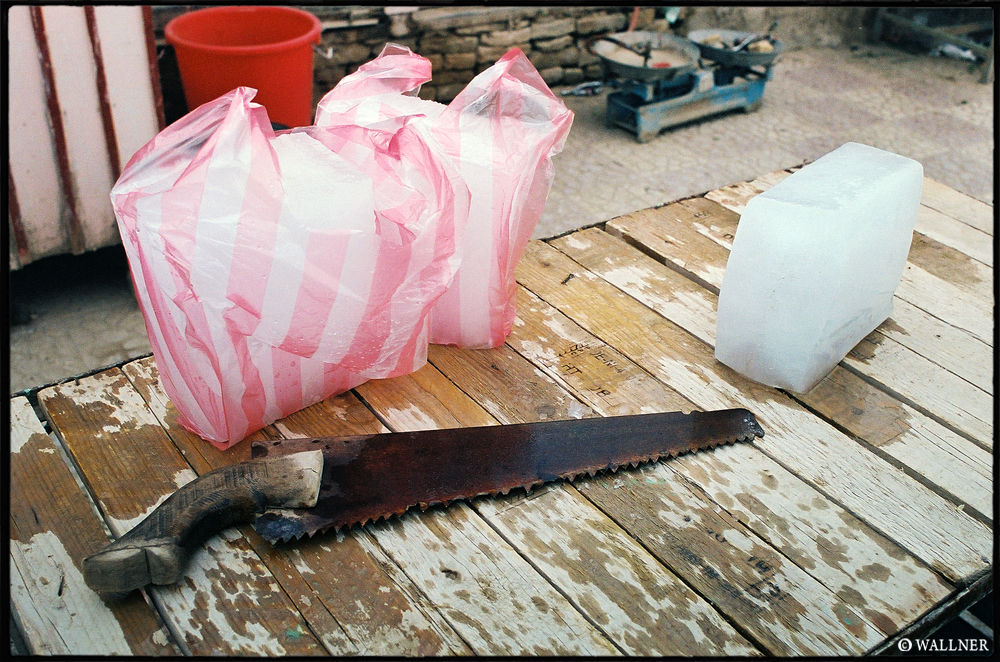 Solidified water is not something easy to come by in desert nations. All around Mazar one would see ‘ice salesmen’ with huge chunks of ice in plastic bag ready to sell to customers in need of a cooling substance if one couldn’t afford a refrigerator. 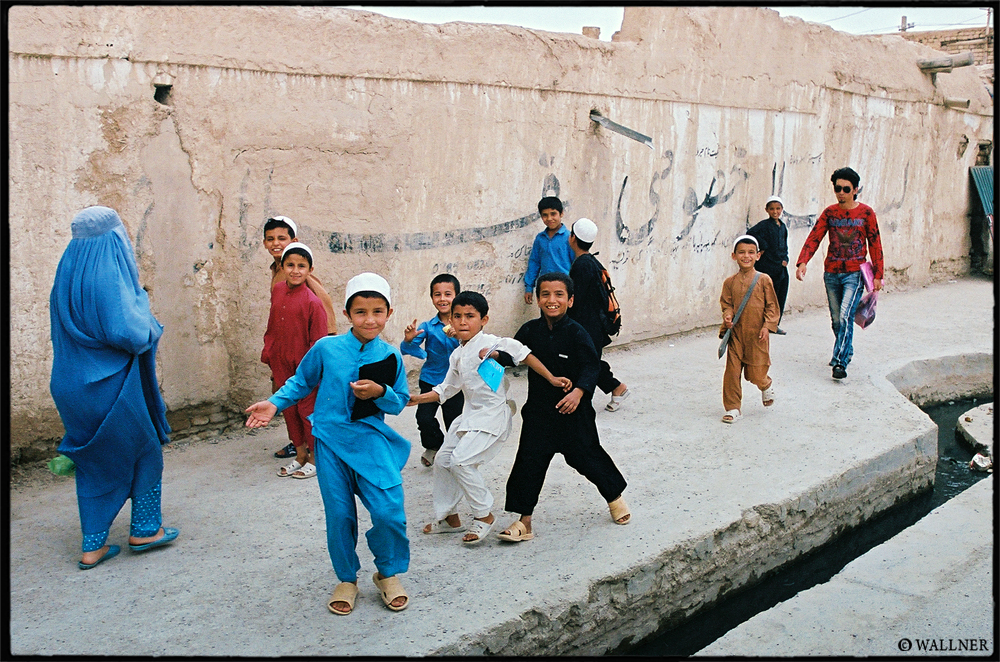 Mazar-i-Sharif seemed quite excited to have the Visualtraveling crew cruise through town. 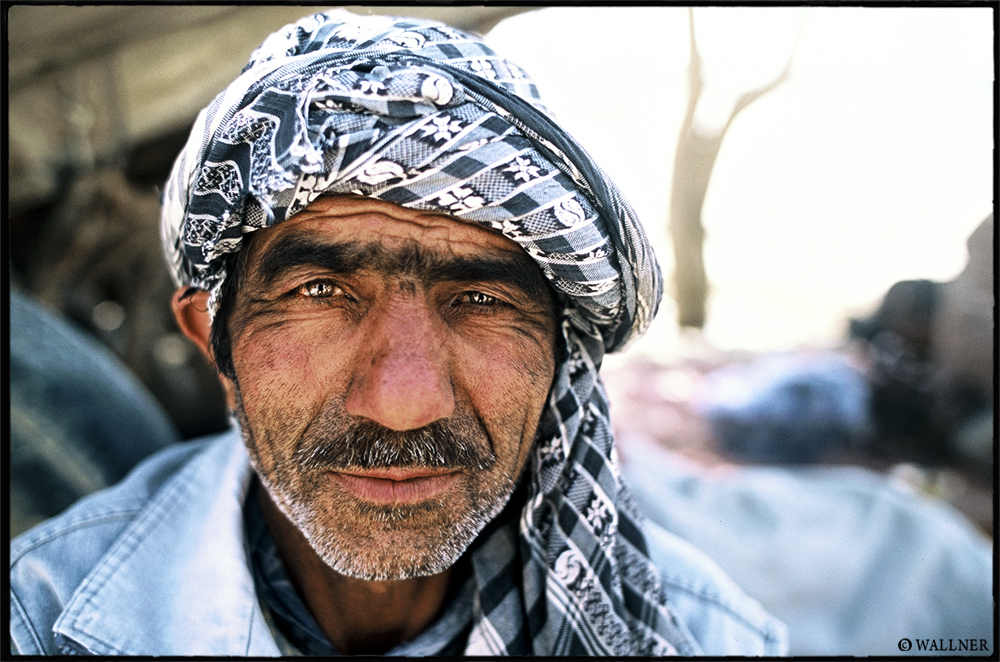 Afghanistan is divided into many different ethnic groups. While the majority in the south and the east are Pashtun or Baluch, the north and west are Uzbek, Turkmen and Tajiks. There are some ethnic tensions between the people, but according to a poll in 2009, seventy seven percent labeled themselves as Afghan first before their ethnicity.

Ready to build some roads. 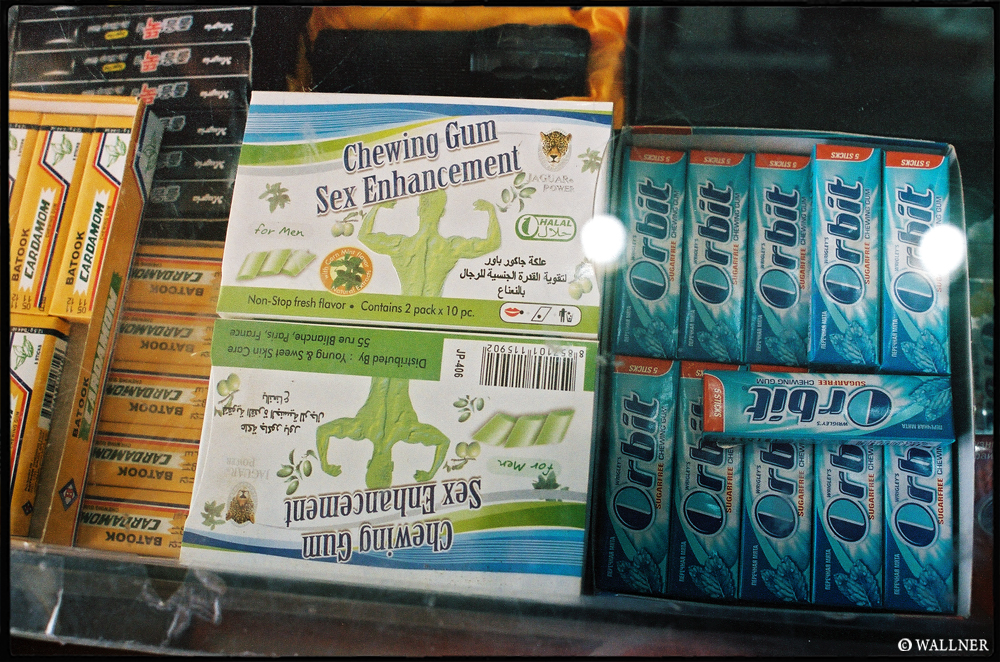 Afghan men love to bodybuild. All around town you would see bodybuilding posters with once in a while an amusing picture of muscles Arnold Alois Schwarzenegger in his prime time from back in Austria. The chewing gums found within stores also had a different purpose than just satisfying one’s teeth. 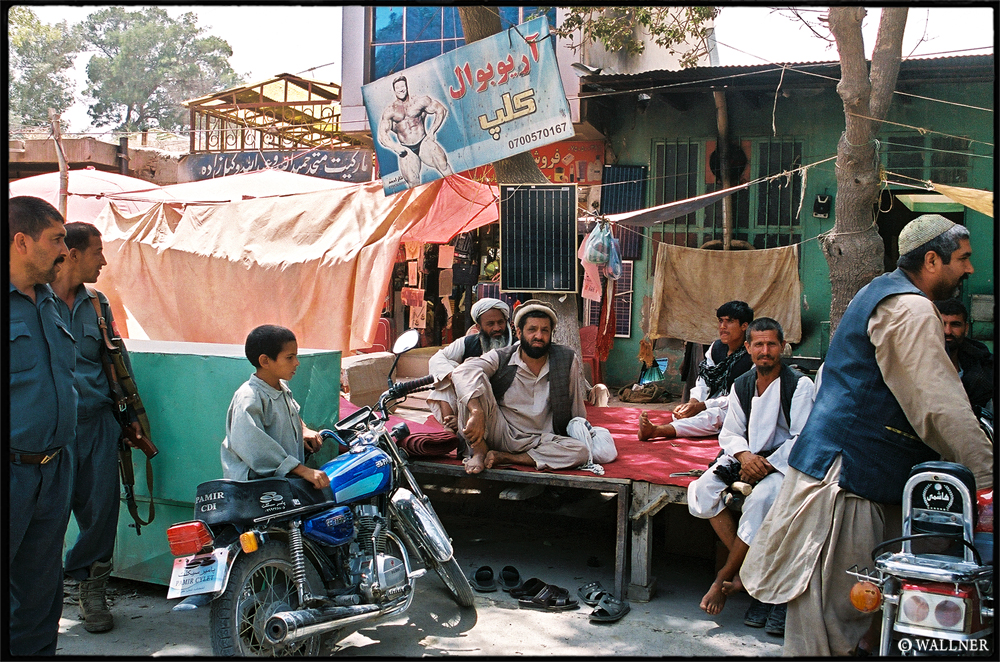 Abu took us to the Balkh, to show us his home town and some historical sanctions, desert landscape and markets. 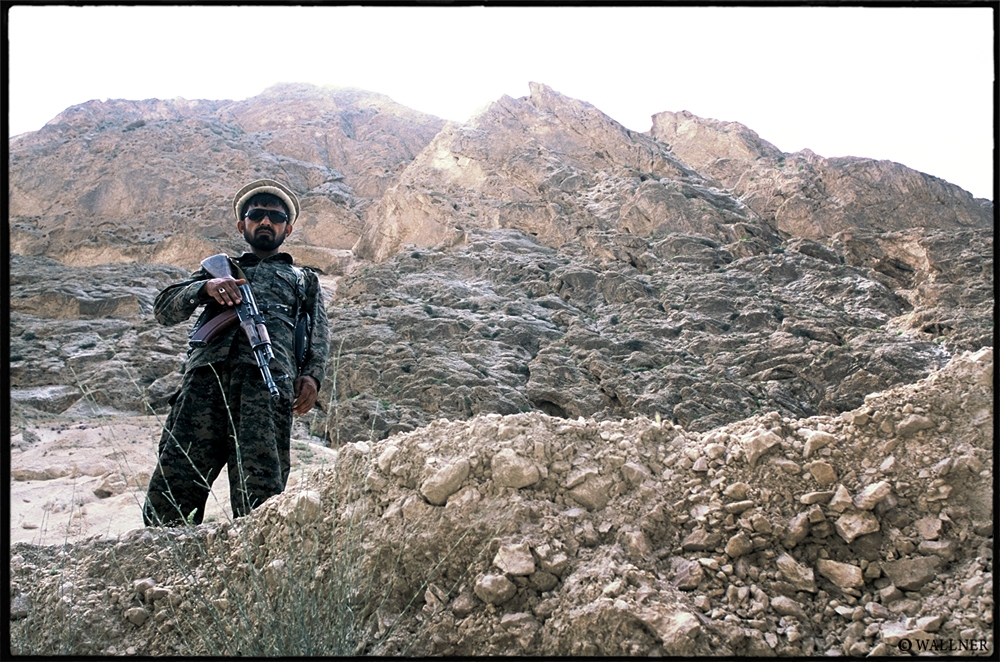 Within a day or two we became quite accustomed to having bodyguards and Kalashnikovs around us. At the beginning we were all a bit intimidated by the killing tool, but a couple days in I would find myself annoyingly moving it away the dinner table because it would be poking me in the leg, not even really acknowledging that this machine has killed dozen of people. 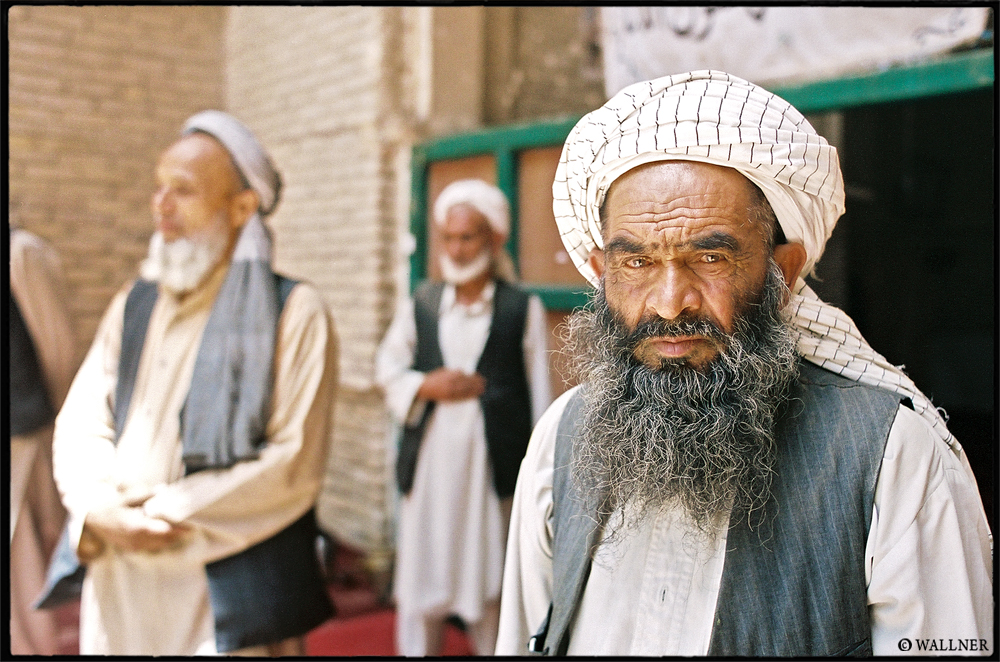 This mullah has been protecting this grave of a significant figure of an ancestor or relative of Ali. Abu was talking to him and was quite shocked to hear when he translated that this man hasn’t left the shrine since forty years!!! 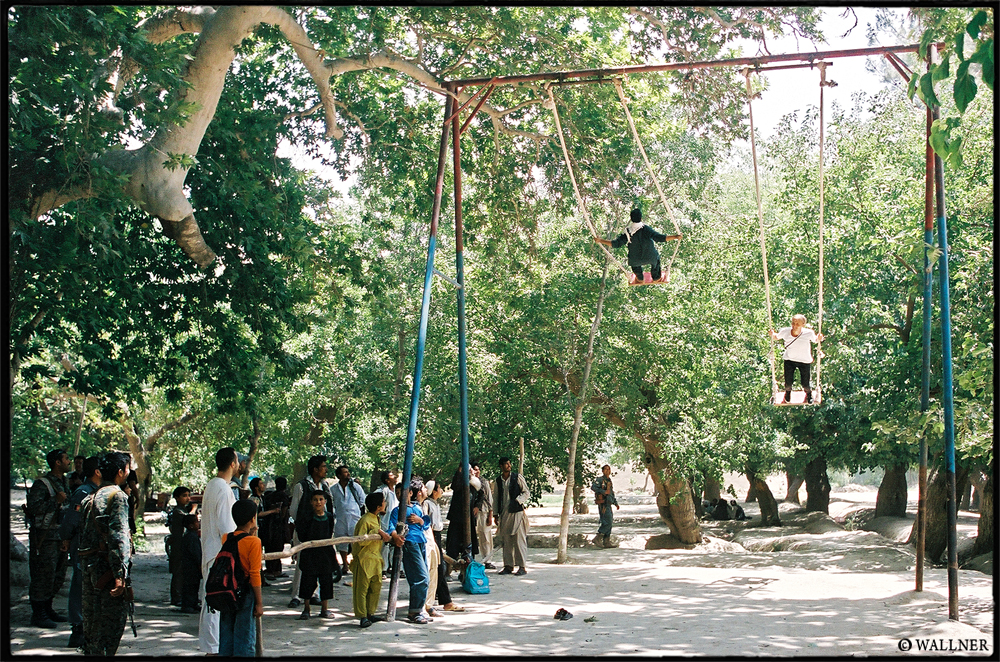 Next to the Shrine a huge swing caused a lot of commotion and excitement. 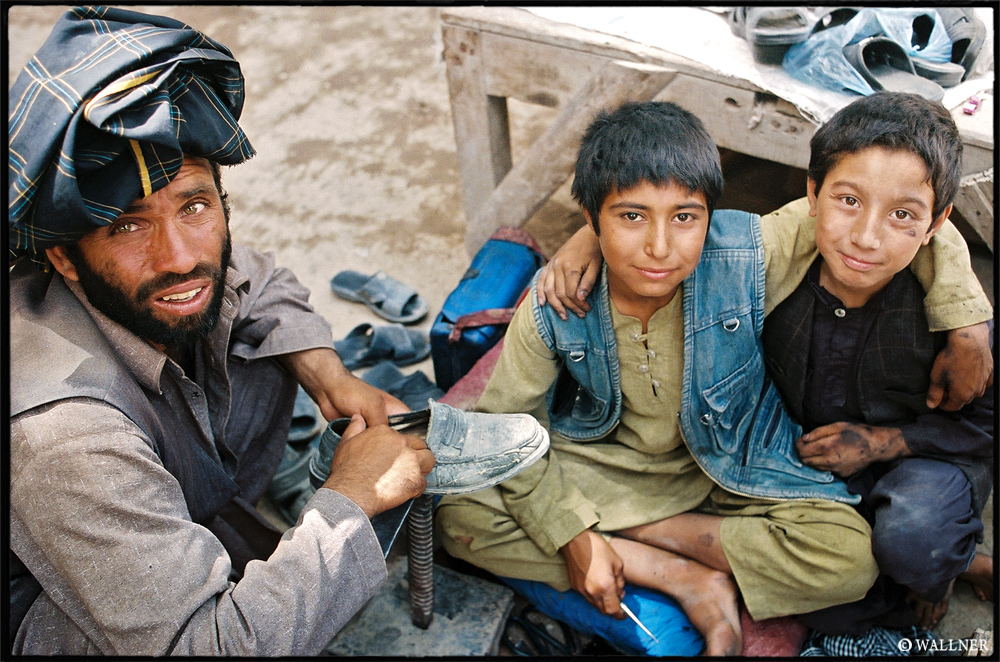 With the unemployment of 38% to 42% and lack of foreign investment because of the decades of war, Afghanistan has a GDP per capita at just below a thousand USD making it the 12th poorest country in the world. Most of the population lives off of one US dollar per day. 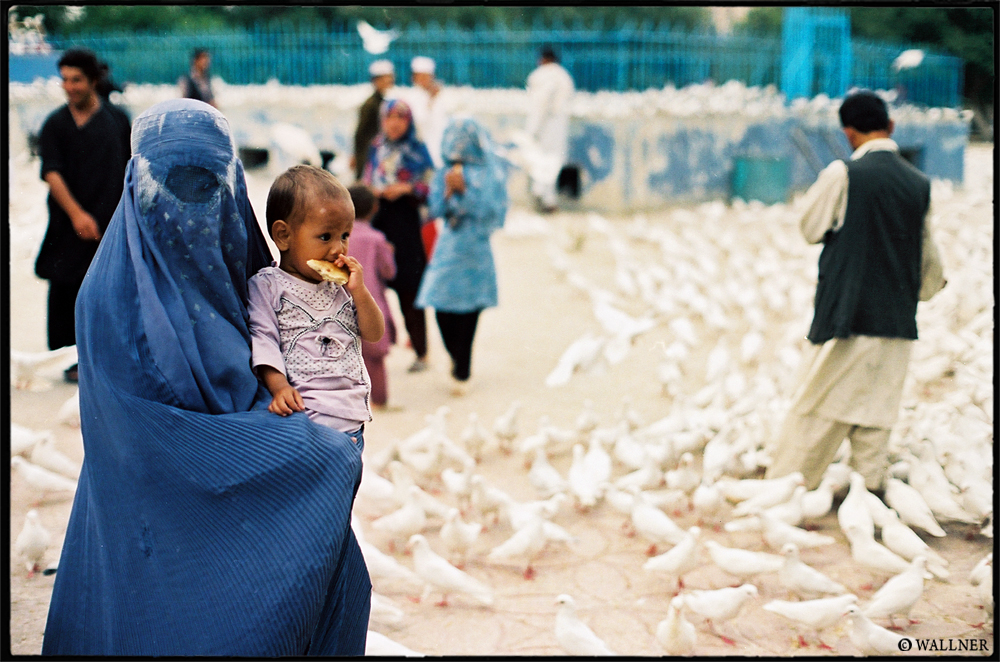 The women are still socially required to wear the blue burqa in public. Even though the Taliban regime has left Afghanistan, the women are just too afraid to take the burqa off in case the Taliban would come back and some angry neighbor men would point out the women who were unveiled. 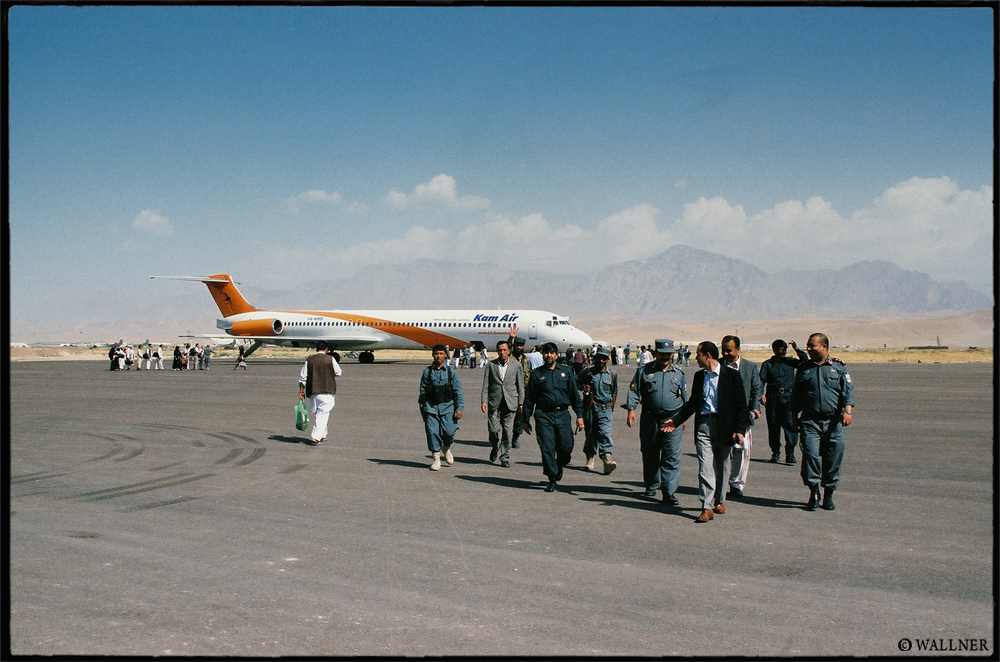 After spending a couple days in Mazar-i-Sharif and Balkh, it was time for us to move on south to our final destination, Kabul. Since the road to the capital is filled with danger, we were required to take a flight. It was quite a surreal experience, the airport didn’t have a x-ray machine and no one even bothered checking our passport before we entered the plane. 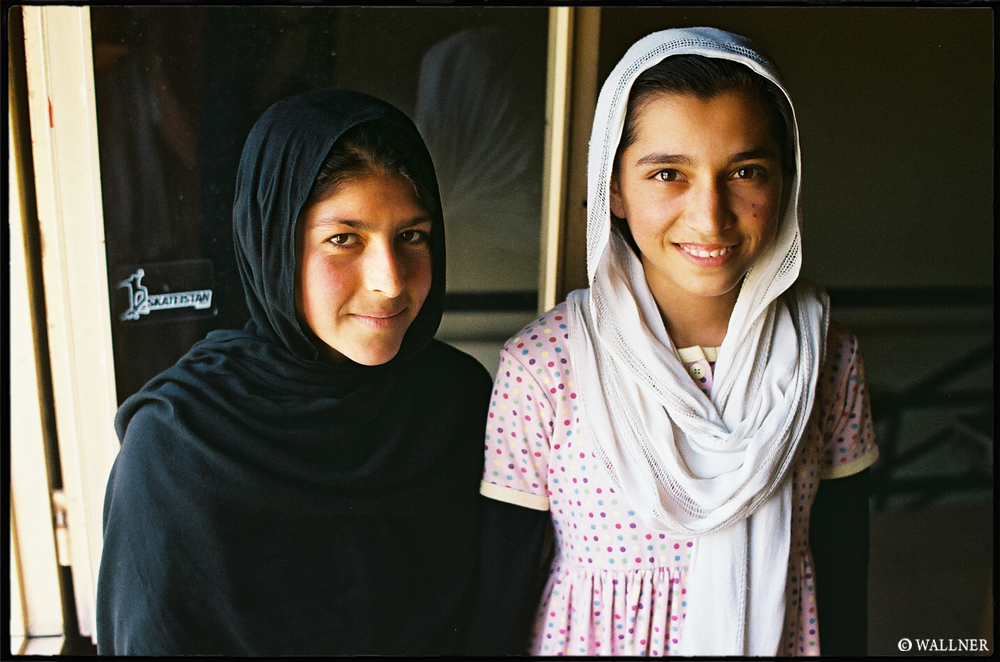 In Kabul we were picked up and taken care of by the Skateistan Organization. These two young girls were one of the exceptional talented female skaters on the day when we skated the marble grounded skatepark/school build by the great fellows of Skateistan. 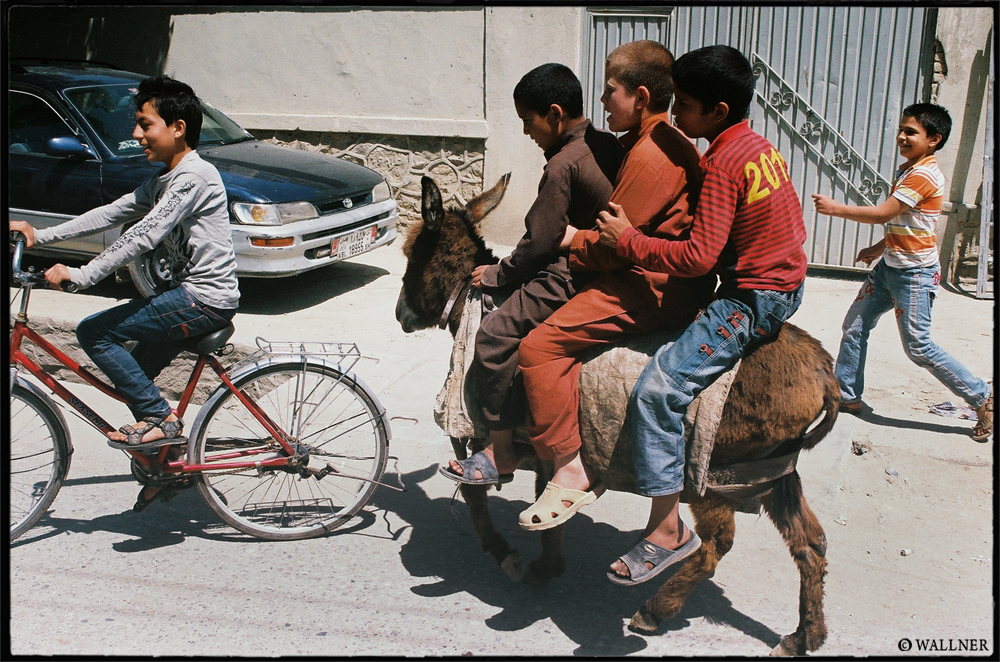 In The north (Mazar-i-Sharif) we had the luxury of being taken care of Abu and his body guards, once we reached Kabul we were unprotected and a bit more paranoid when hearing that there would be suicide attacks on the days we were in Kabul. Luckily we got away without anyone getting hurt, but shortly after our departure a bunch of bombs in and around Kabul left many dead. Just recently in early September, four of the kids from Skateistan Organization were victims of a suicide bombing. Our hearts go out to their family and friends. 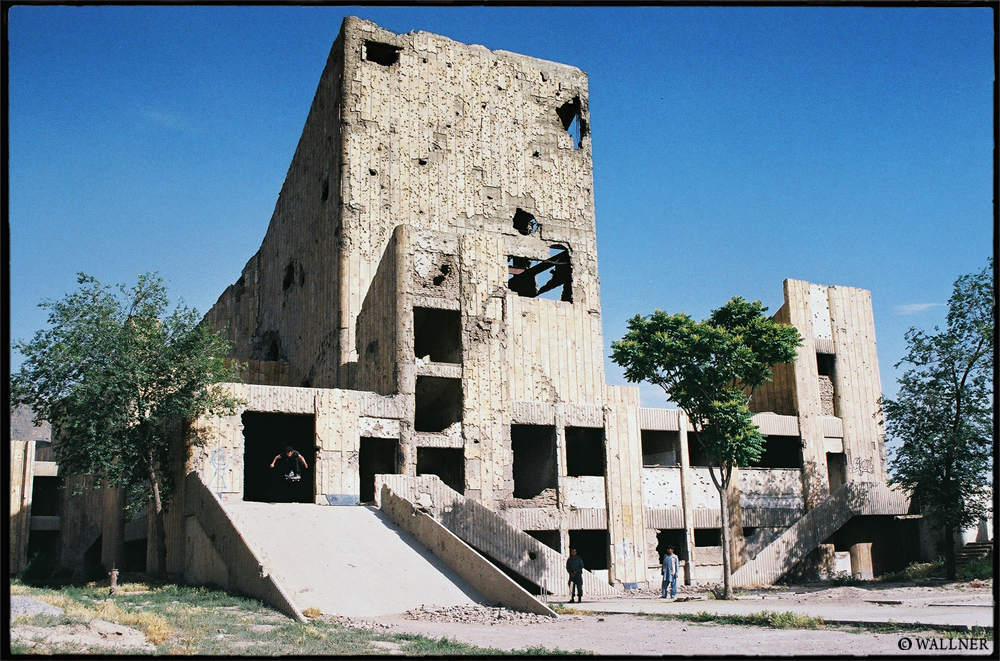 Skateboarding the streets of Afghanistan is not easy. On our last day we were taken to the ex- Russian Cultural Center where Michael Mackrodt ollies over a gap into a bank next to a building filled with bullet holes. Our overall experience within Afghanistan was breathtaking and just one of a kind. Hard to put into words. But I hope the upcoming documentary ‘Meet the Stans‘ which will hopefully release around the end of October will give you a better picture of our journey along the Silk Road leading to Kabul, Afghanistan. Thank you Abu and the Skateistan Organization for showing us around the protecting our backs.