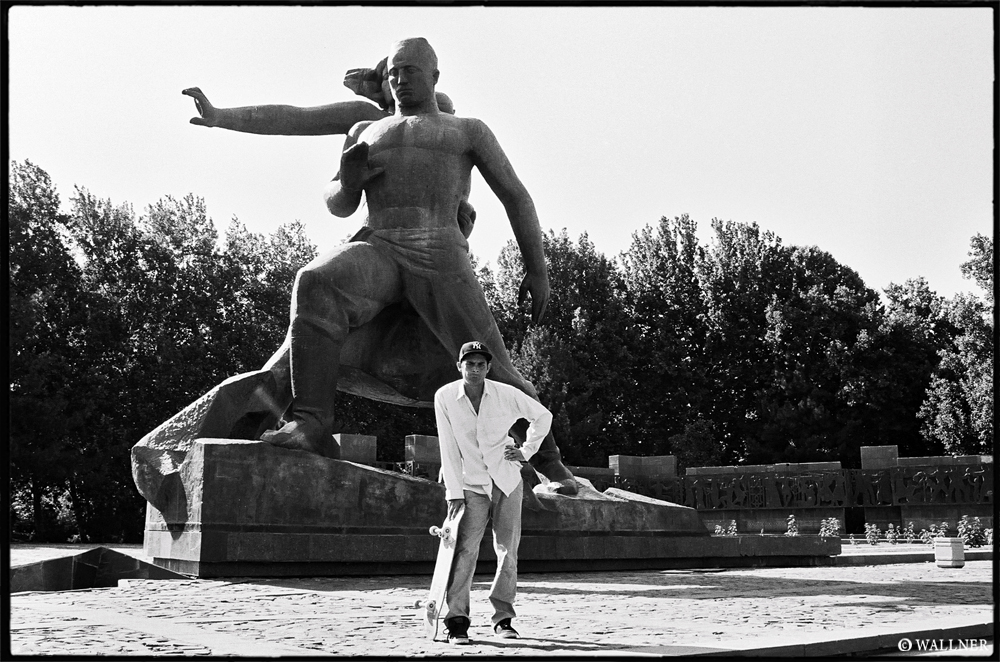 For years I have been getting blackmailed by Kenny Reed, saying he would go to Uzbekistan that summer. I tried my best to convince him to stay put and hold up on it, since I was planning this trip through Central Asia for quite a while now and wanted Kenny to be a part of it. I am pretty sure there were nights were he would secretly check on flight tickets to Tashkent in the hopes he would have the balls to click confirm and just fly solo. Around a year ago there was a time he was in Thailand and said he would go to the beach for a couple days but at the same time I would hear that he looking at cheap flights to Central Asia the night prior. It was just this funny joke in the end between us where I would accuse him of having been in Uzbekistan when he would be missing for a couple days.

The local drug dealer/ junkie from around the corner. 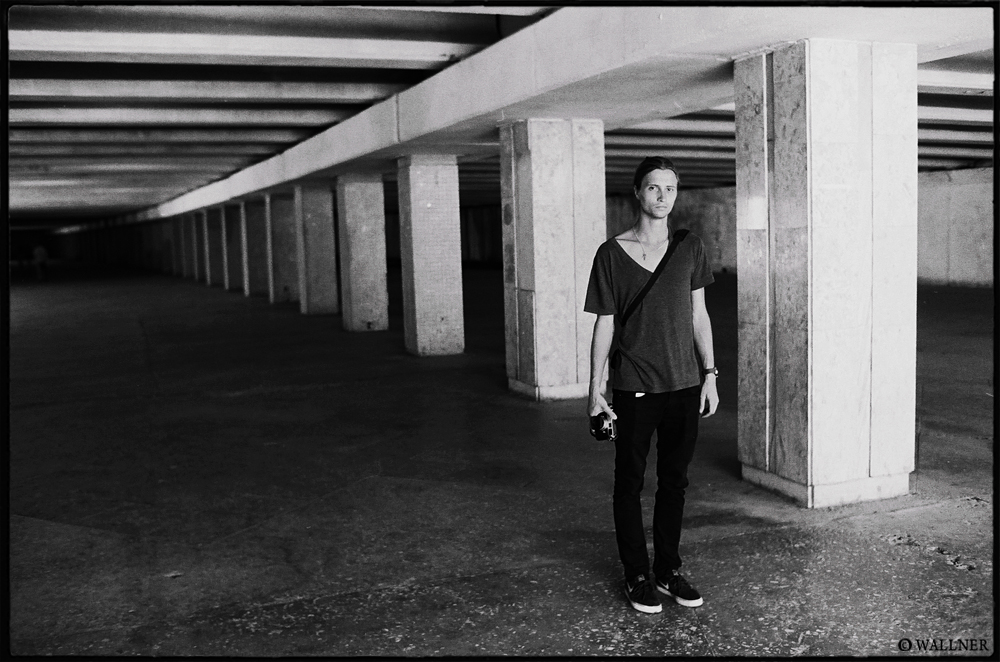 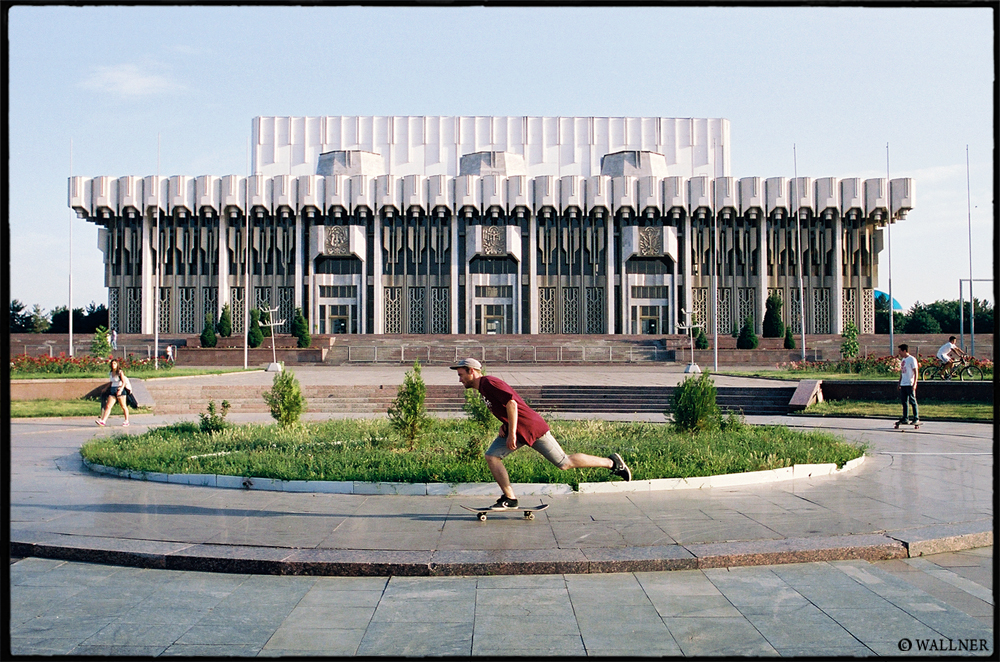 Apparently Kenny heard from somewhere that Uzbekistan was filled with marble streets and would be equivalent to a gold mine in terms of skateboarding. Kazakh local skaters told us that their filmer got arrested and was tried to be proven guilty of being a spy from Kazakhstan after he just filmed a skater with a government building in the background. That was enough to get me a bit paranoid of taking the camera out. Luckily we were able to avoid such torturous occasions and were left pretty freely when it came to filming skateboarding. In the other hand, everything else, like obtaining money, dealing with a black market exchange rate & inflation, being registered, leaving the city and pretty much anything else which is easy in other countries was a nightmare in Uzbekistan. 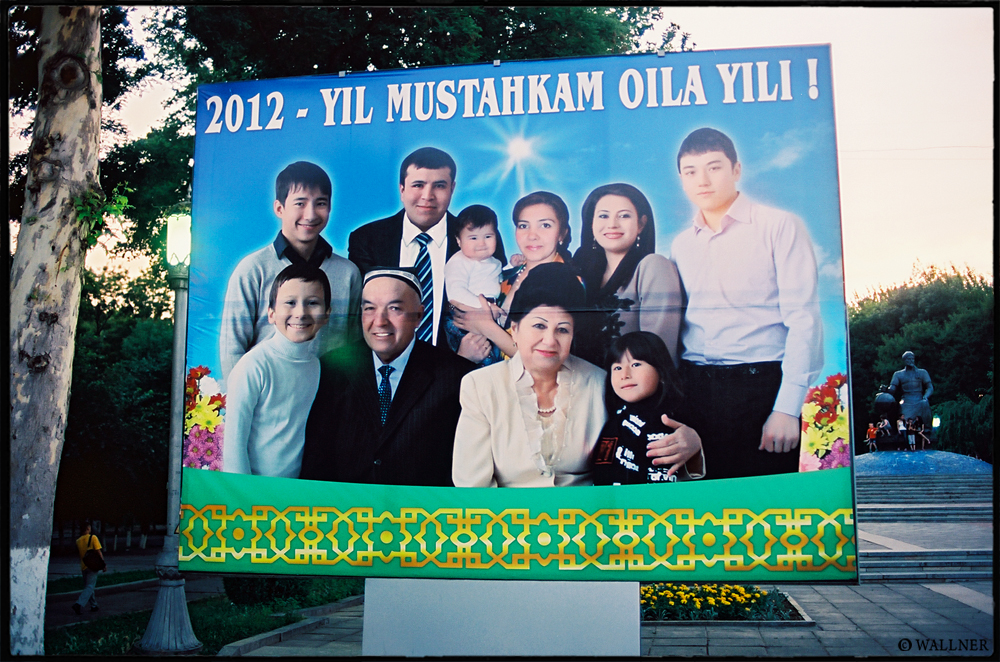 Islam Karimov and his family with the Uzbek text above saying ‘Year of the strong Family’. According to various texts, around ten year ago Karimov ordered the parliament to pass a law that made him and all members of his family immune from prosecution forever. I guess they can do whatever they please. 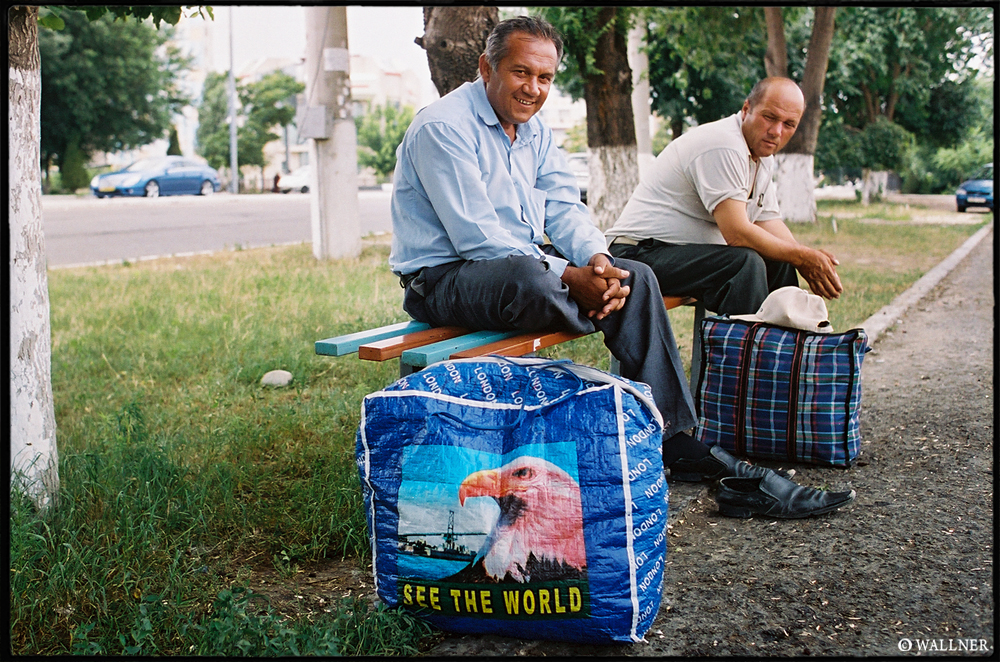 While the Uzbeks would love to see the World, some of the World has even no idea of its existence. Before the attacks on the World Trade Centers, American was pretty much just wagging its finger at Karimov for the human rights violations he has broken for years. A week after the attacks when realizing that Afghanistan will be a point of interest, all of the sudden high ranking American officials and people like US defence secretary Donald Rumsfeld flew to Tashkent to become friends with Karimov. Powell claimed that Uzbekistan was changing towards democracy, which he was just as wrong about as Saddam Hussein having weapons of mass destructions. 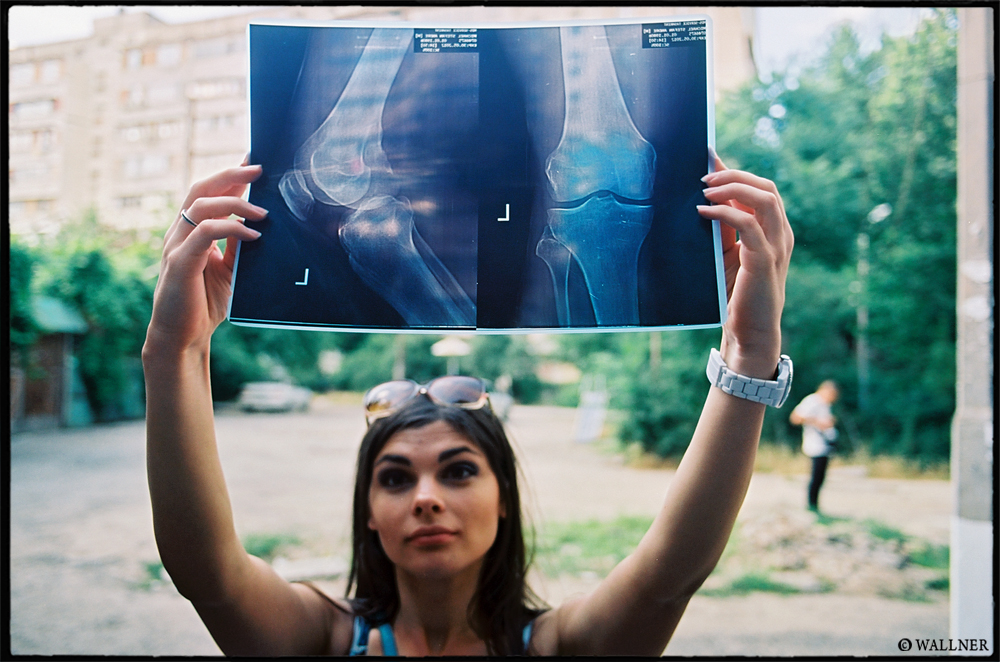 Veronika holding up some sad results. 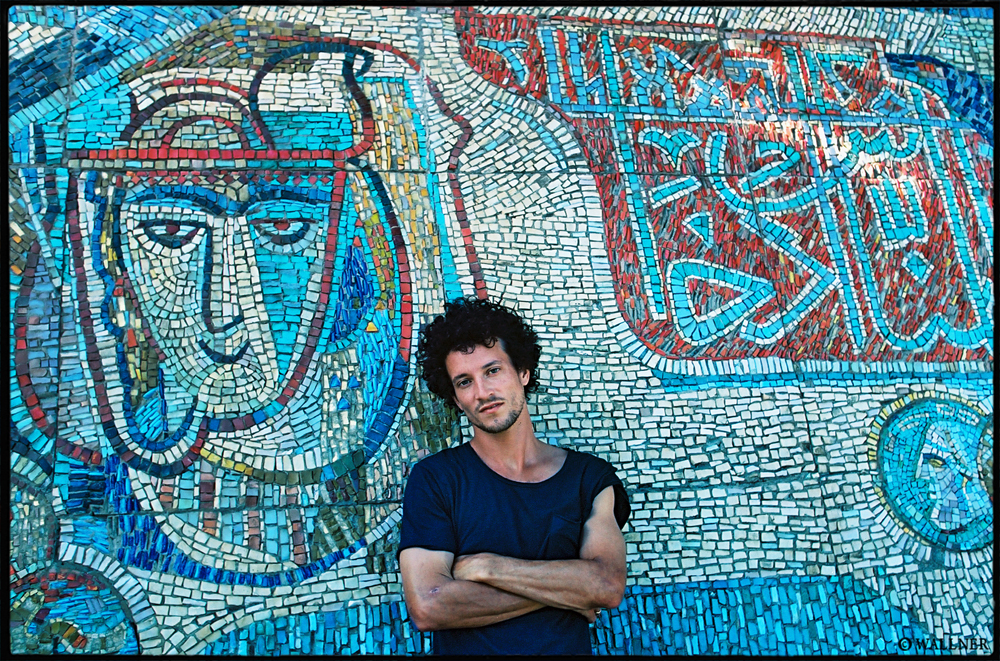 Michael Mackrodt is not the type of person that would get hurt jumping down a big set, but rather while wrestling drunk in Uzbekistan. He was unfortunately out for the rest of the trip, but is luckily doing fast progress at recovering his knee after having surgery only two month ago. 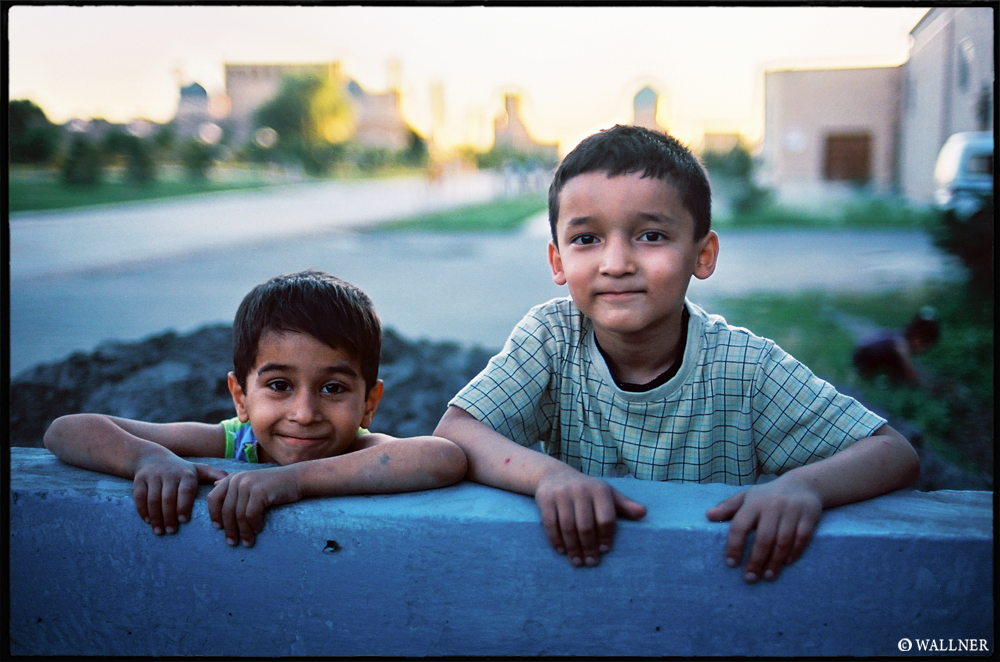 We arrived at the ancient city of Samarkand right before the sun set. One was greeted by these young boys while staying in a guesthouse only around a hundred meters away from the beautiful turquise madrasahs at Registan. 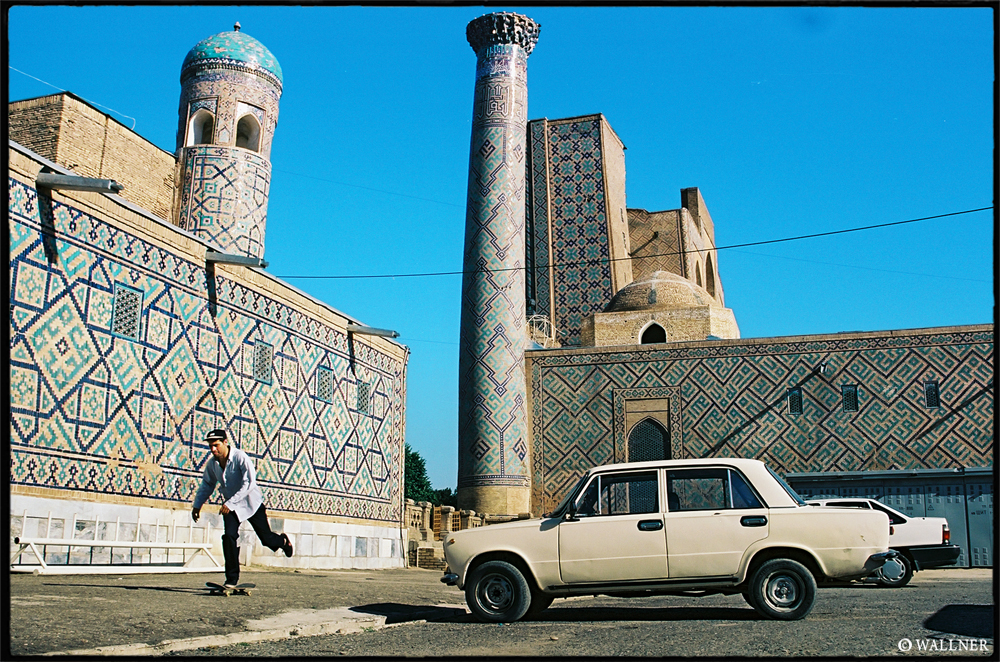 Kenny Reed pushing as usual through the back alleys of Registan square. 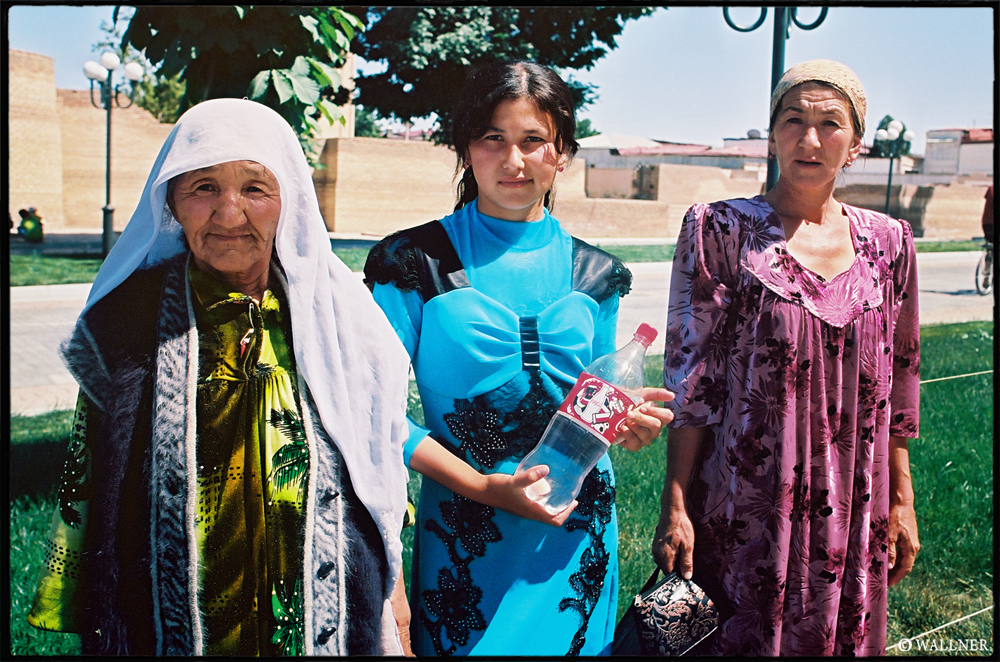 I really enjoyed the Uzbeks way of clothing, the women dressed consisting of plain khan-atlas tunic-dresses and wide trousers with very saturated colors. Just a year ago, Karimov’s daughter Gulnara Karimova had her fashion show in New York cancelled by the organizers cause of the human right related issues that her father is executing. 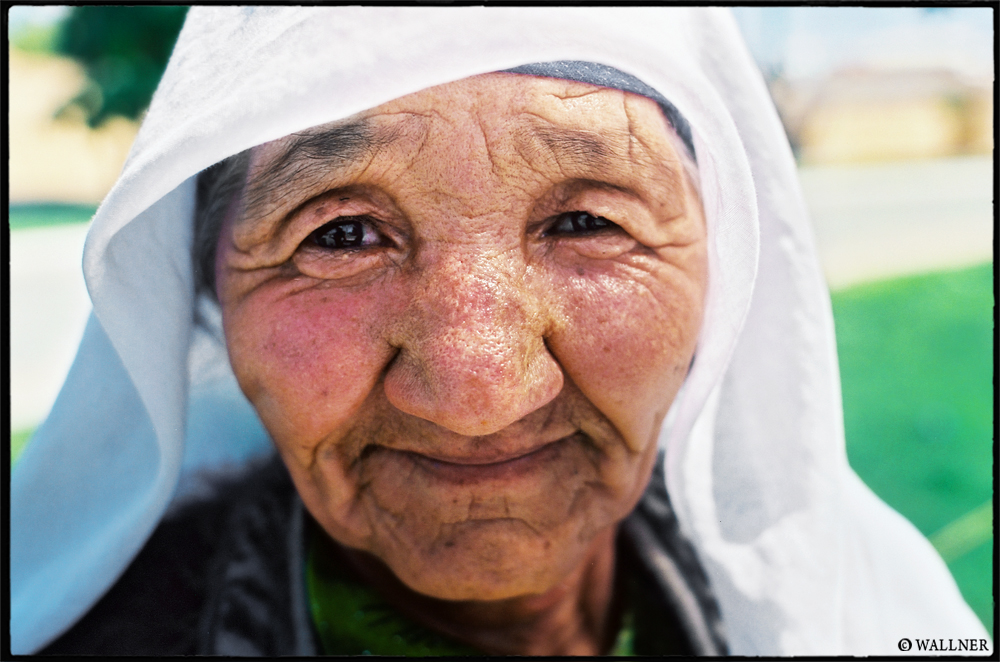 This lady most likely grew up in an era of Samarkand when the russification of political & economic life in Uzbekistan began in the 1930s continued for around forty years. Now she lives in a Samarkand which is attracting Muslim tourists eager to see a different type of religious sights within Islam, as well as curious western travelers which was not really possible during the tight control of Uzbekistan under the former USSR. 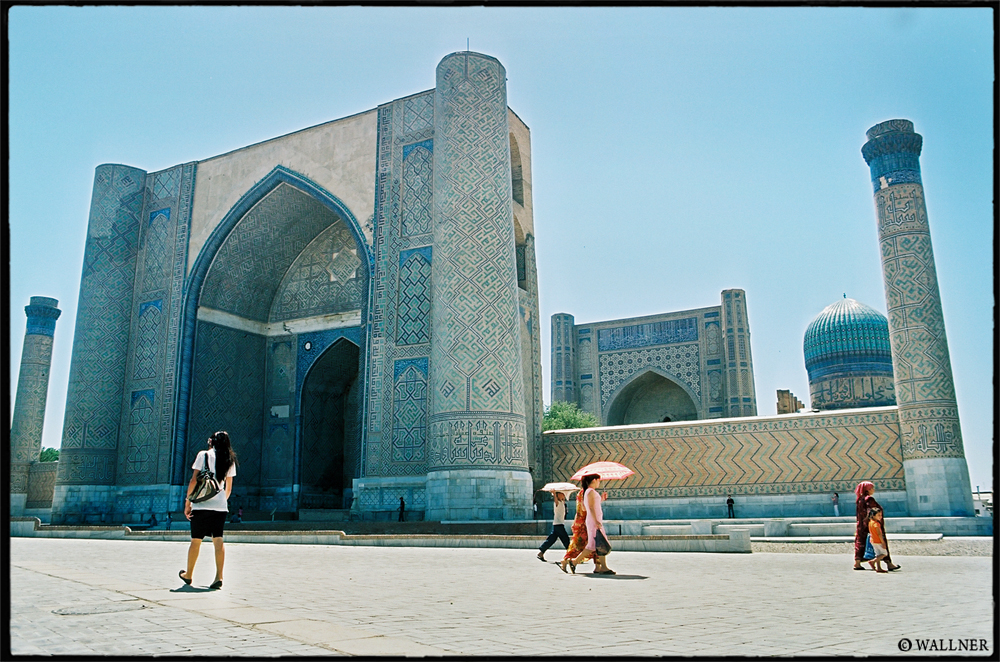 Finally making it to Samarkand is a dream come true. As much as we travel to find skateboard spots, I didn’t expect to find anything within this ancient city. I was quite baffeled when we found hubbas, gaps & an amazing empty pool. Check out the new Issue of Kingpin (September 2012), Alexey Lapin put together a nice 18 page article with an amazing double page spread of Gosha bluntsliding a hubba with madrasah in the background. Great photos Alexey. 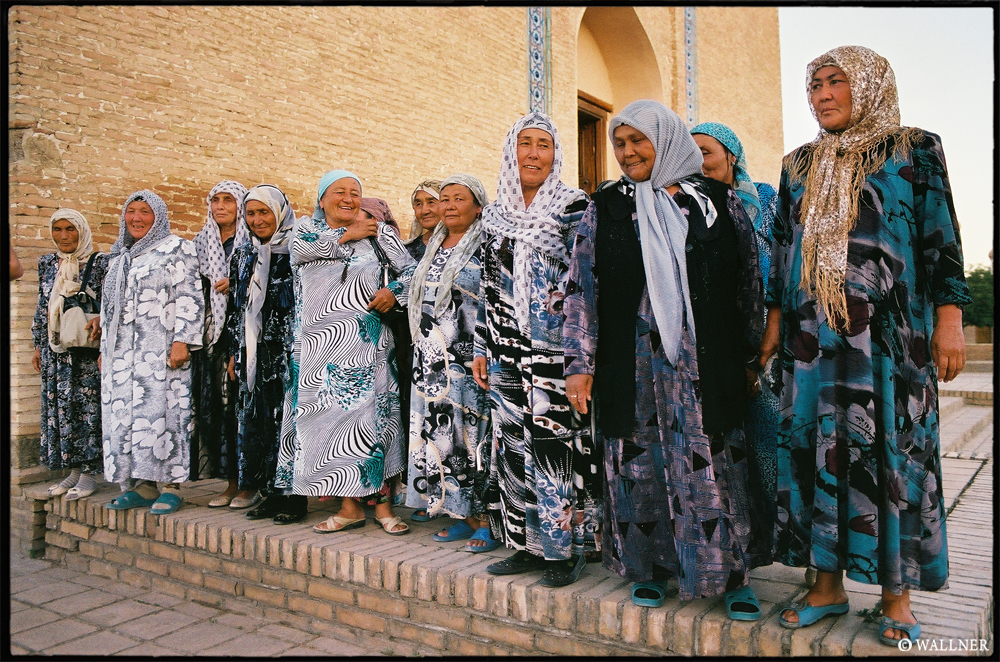 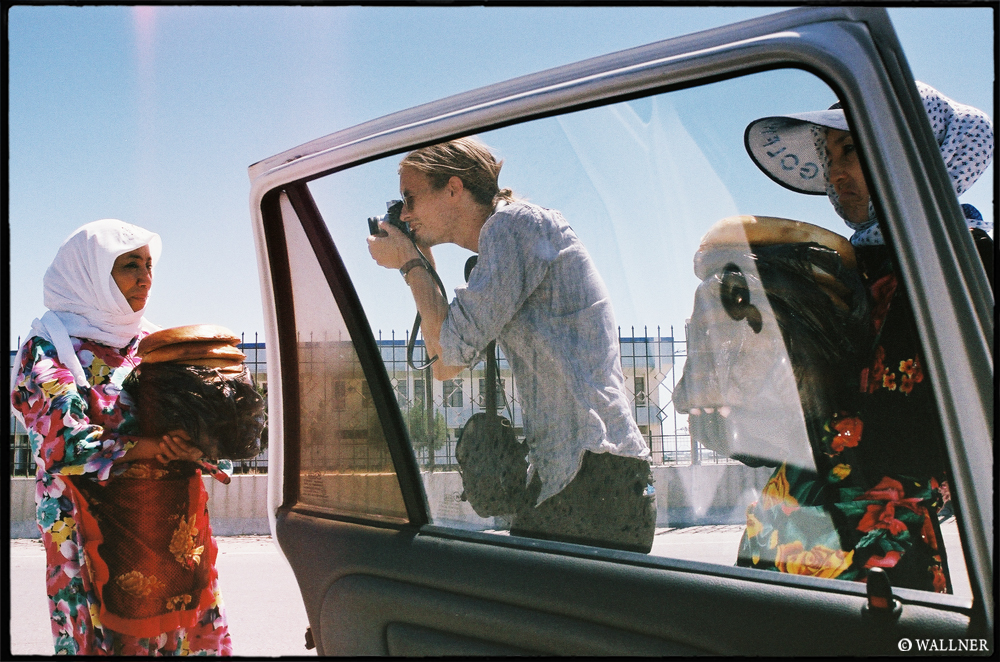 As much as we wanted all to the other ancient city of Bukhara, we had to go towards Termez for last minute change of plan which will be explained in the next photo update. 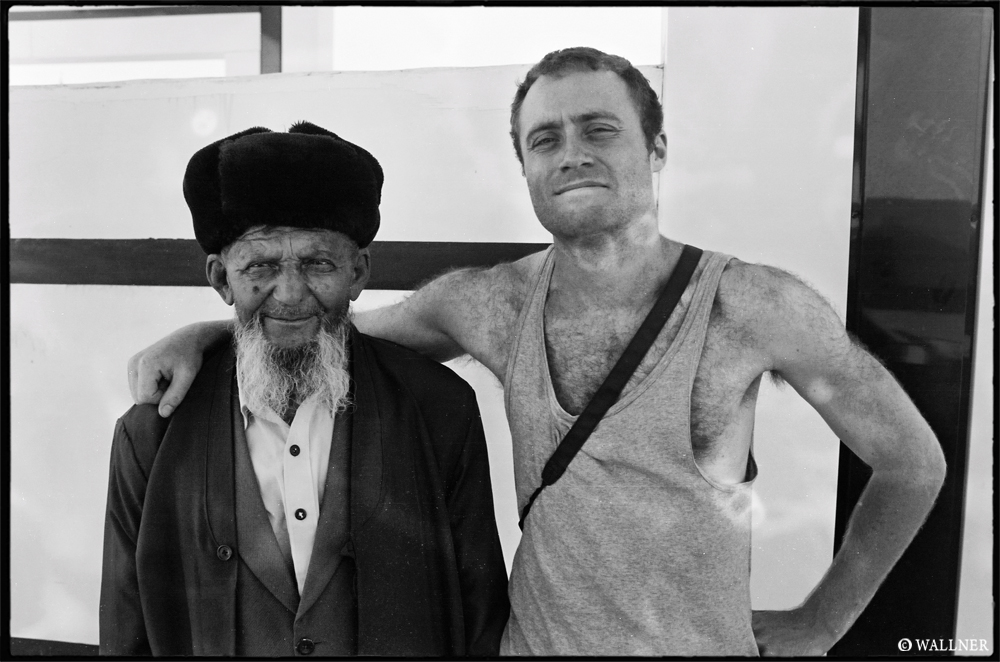 If you haven’t realized, I am still shooting Analog. I have developed my photos at really random and sketchy laboratories all around the world and never had a lab totally destroy a roll. But then after coming back home to reliable Germany, I brought my two dozen rolls of film to a professional lab in Stuttgart where they mess up one of my films. I was super angry but I guess it had to happen one day. Plus the scratches weren’t too bad, but I guess some chemical imbalance must have occurred since it seems like Laurence has these crazy bubbles all over his neck. 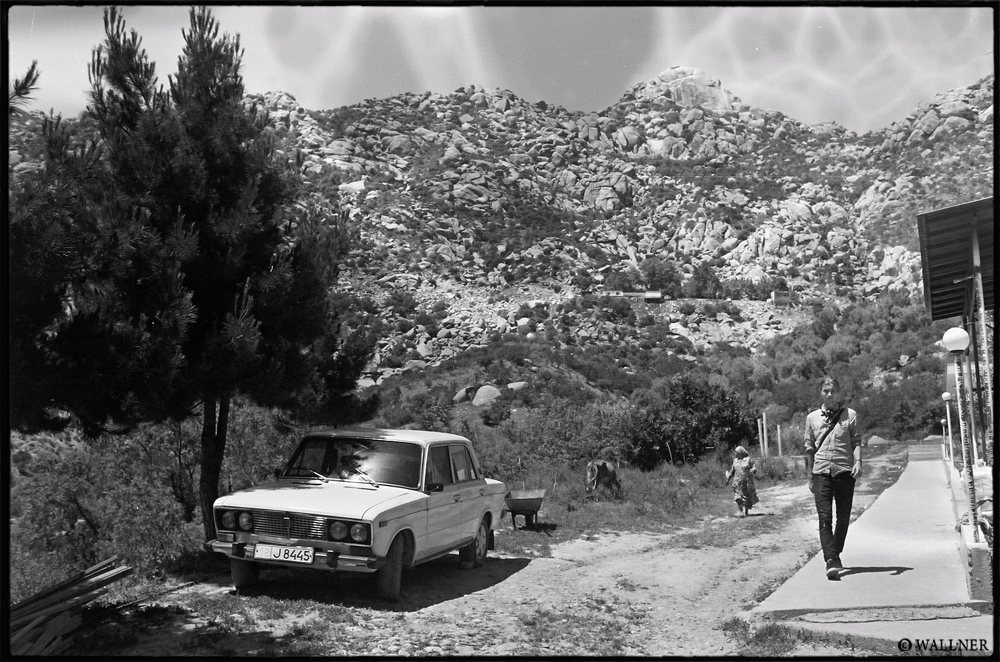 Six to seven hour taxi ride through the mountains of south Uzbekistan.