Voyage to the center of Europe 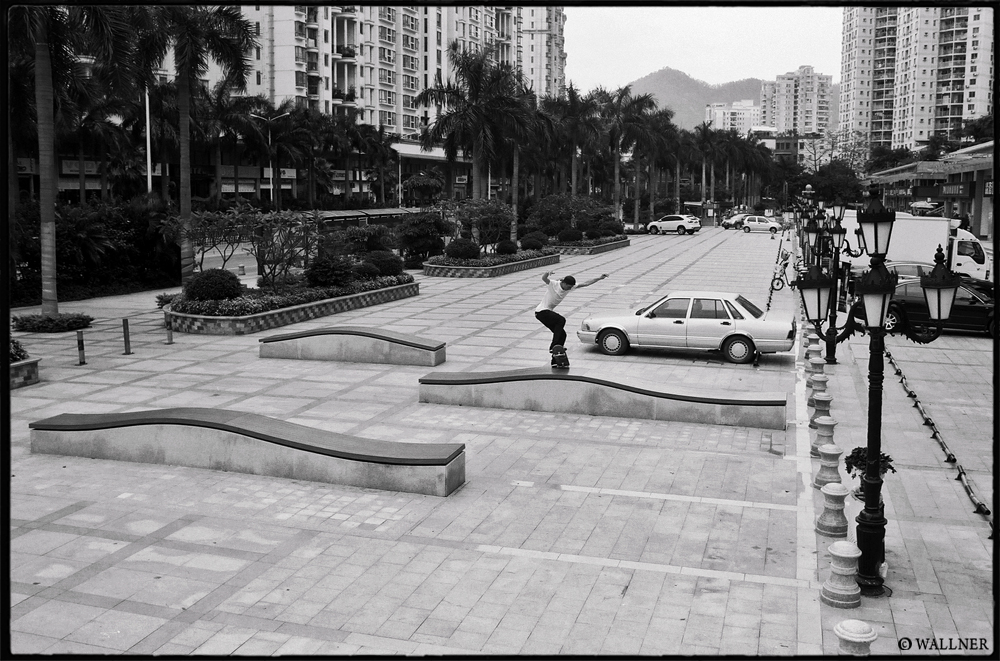 Shortly after returning to China from the Far East of the Russian Federation & the DPRK, I found myself waking up to a knock on the door with Walker Ryan on the other side ready to gather some footage for his upcoming Transworld section. No better place than China to be productive, and no better person to be productive with than Walker. Only 5 minutes walk from my old apartment in Shenzhen, Noseblunt on the wooden/plastic waves. 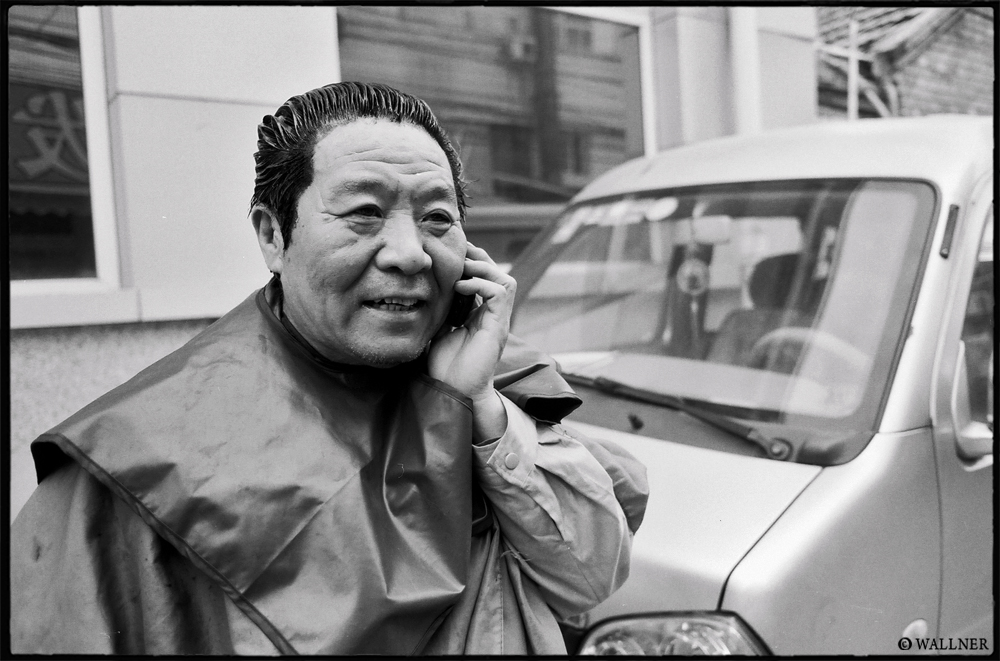 Street haircuts in the Hutongs of Beijing. 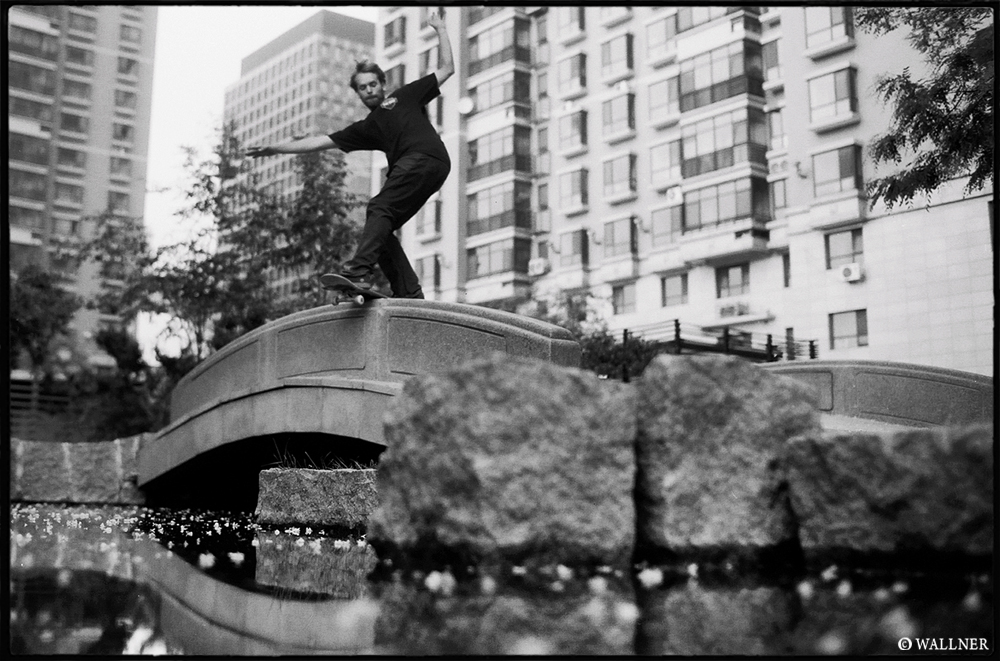 I been trying to circulate the Eurasian Peninsula for a couple years now, but the time had come to conduct a voyage through Central Asia along the Silk Road. Preparation and planning was not of ease since tourism hasn’t quite blossomed in the ex-Soviet countries of Central Asia. My travel companions such as Reed, Keefe, Mackrodt, Ryan, Zvereff, Korobkov, Provotorov, Lapin & Kelley all confirmed without a second thought. We were also very pleased to have Bachinsky, McDonald and Konyshev join us for parts of an adventure along the Silk Road. Since these guys just murder black marble with back to back tricks, I found myself stuck to the record button rather than triggering off analog photos. I might have taken two photographs while being in Beijing for a solid week. One of them is Jimmy McDonald from the East Coast front bloardsliding up and down a very commonly seen marble Chinese footbridge. 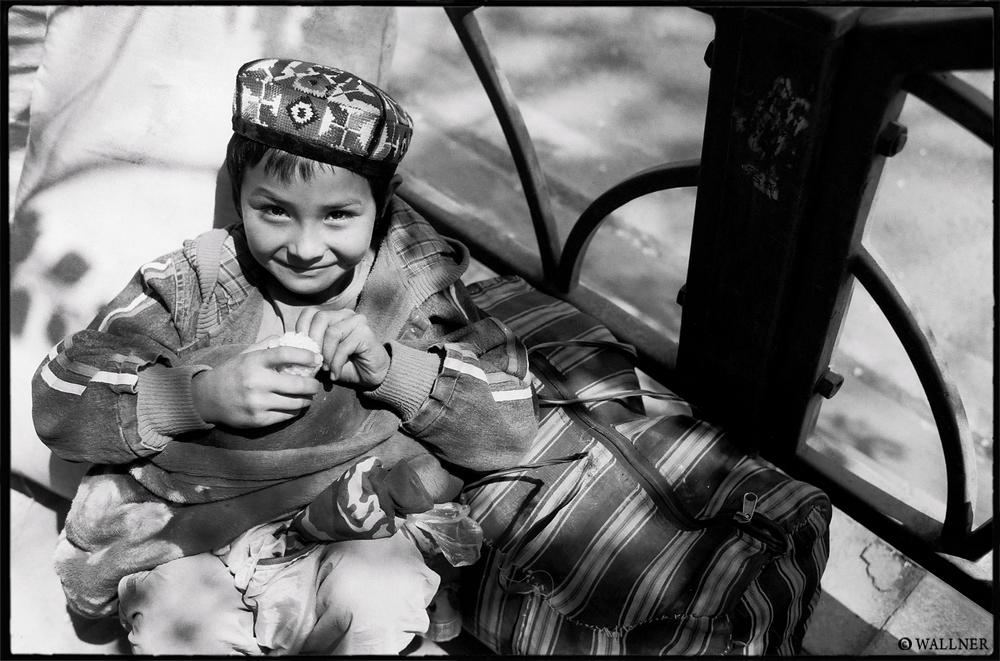 Urumuqi, Ulumuqi or Ürümqi… All of them are correct, and just like how the name can be pronounced in many different ways, the city itself can be seen and experienced in diverse angles. Urumuqi is the capital city of the Xinjiang Province of the People’s Republic of China, which pretty much lays at the north western edge of the Middle Kingdom. Originally inhabited mainly by the Uyghur people belonging to the Turkic ethnic group, now live together with Han Chinese who have expended more westwards within the last decades. In the outskirts you could mistake yourself of being in any large megalopolis of China, but when traversing within the core of the city, one is confronted with an Islamic touch; mosques, nan bread & shashlyk, Arabic written store signs, women in burkas and abayas. 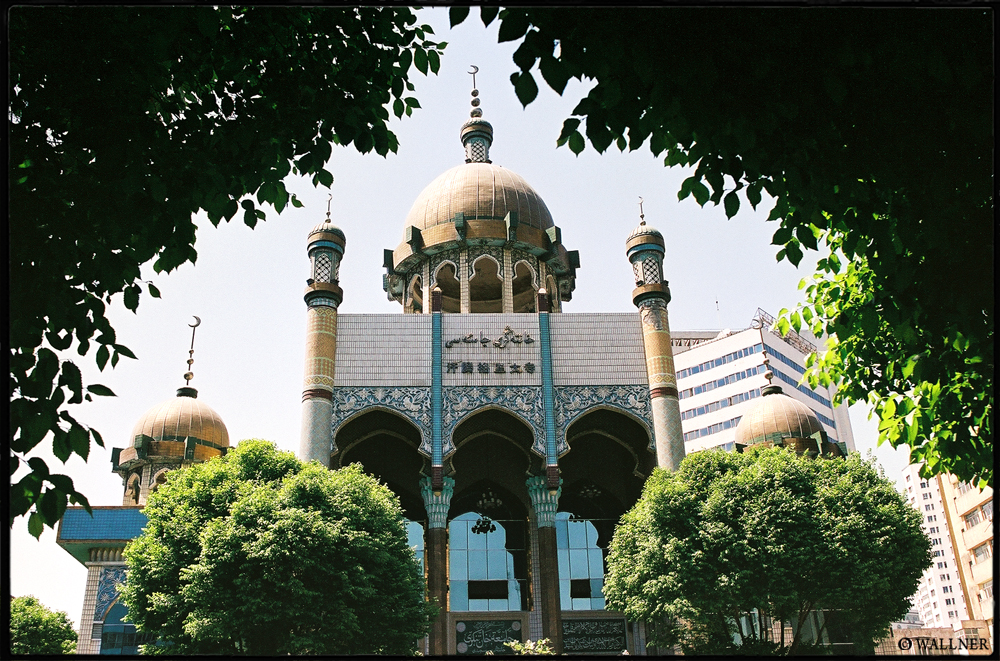 If you happen to live in Ulumuqi and want to go for a swim in the closest ocean, you might be confronted with the fact that you will have to travel the farthest to reach any body of water than anywhere else in the world. Ulumuqi is located only a couple miles away from the center point of the Eurasian Peninsula, best place to live if you can’t swim. 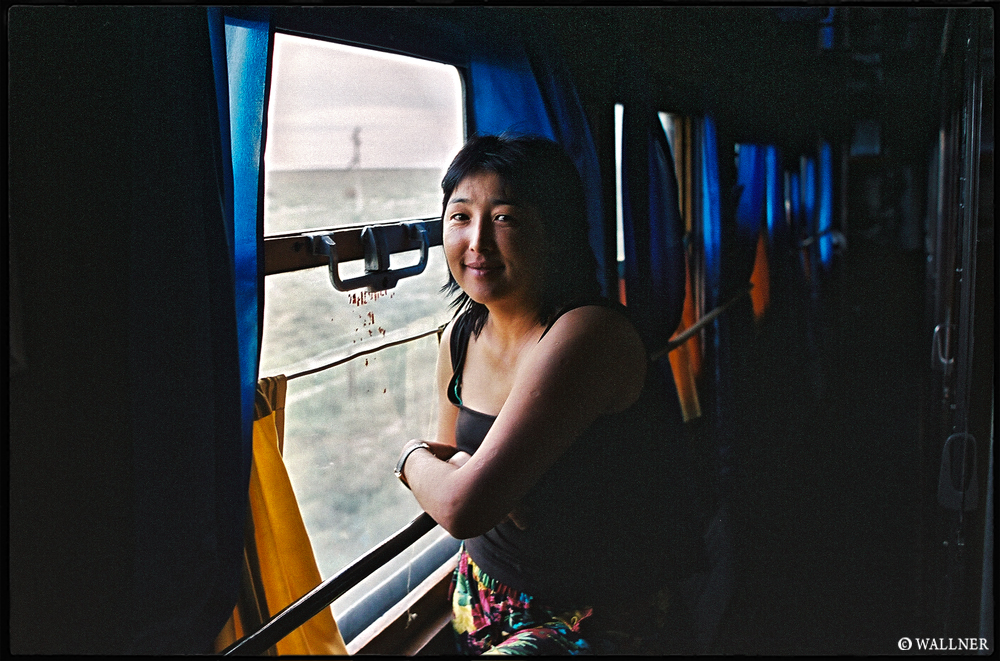 After gathering almost twelve minutes of raw skate footage in Beijing and Ulumuqi, my biggest concerns didn’t rely on the lack of skate maneuvers for the documentary anymore. We could lean back and relax for 31 hours until we would step into the first leg of the so called ‘stans. The day and a half consisted of sleeping, playing Uno with punishments,
pouring Kazakh booze into our bellies, feeling bad for Jimmy who was out with a flu, watching ‘Eastbound & Down‘ and mingling & connecting with the locals in the smoking cabin, who ended up loving our presence. 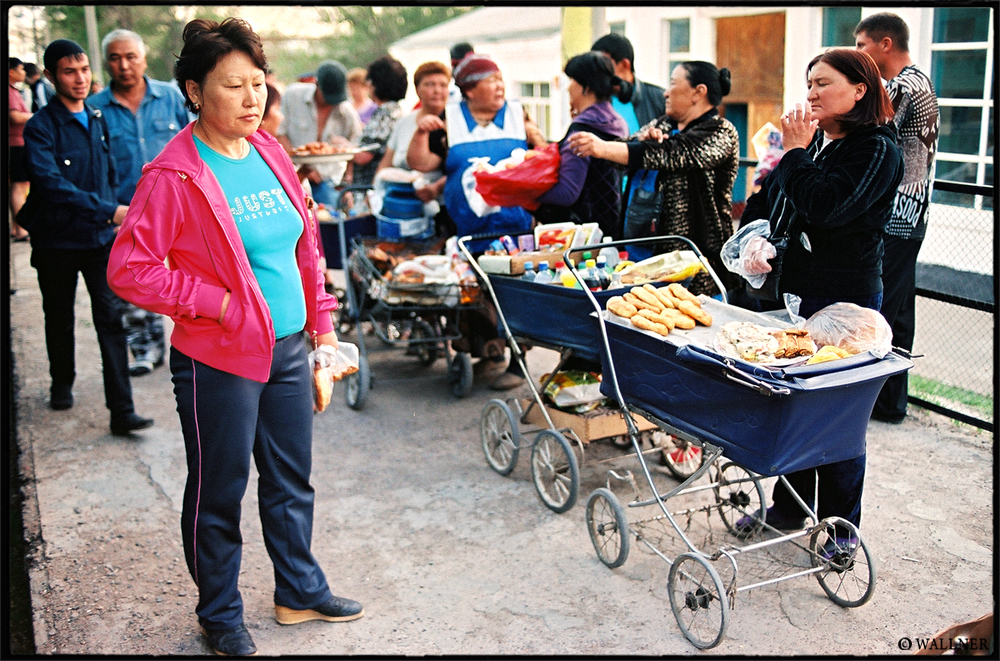 The train stops every few hours to give the babushkas (meaning ’grandmother’ in russian) selling various snacks and delicates in small towns a bit of business. The conductor would be always happy to tell us in Russian or Kazakh what the name of the town was called where we stopped. I think for this stop, we were able to understand that Mikhail Kalashnikov, the inventor of the AK-47 was born here. Mr.Kalashnikov once said, he wished he would have invented a tool for farming such as a lawn mower instead of a machine that became a tool for eliminating millions of souls. 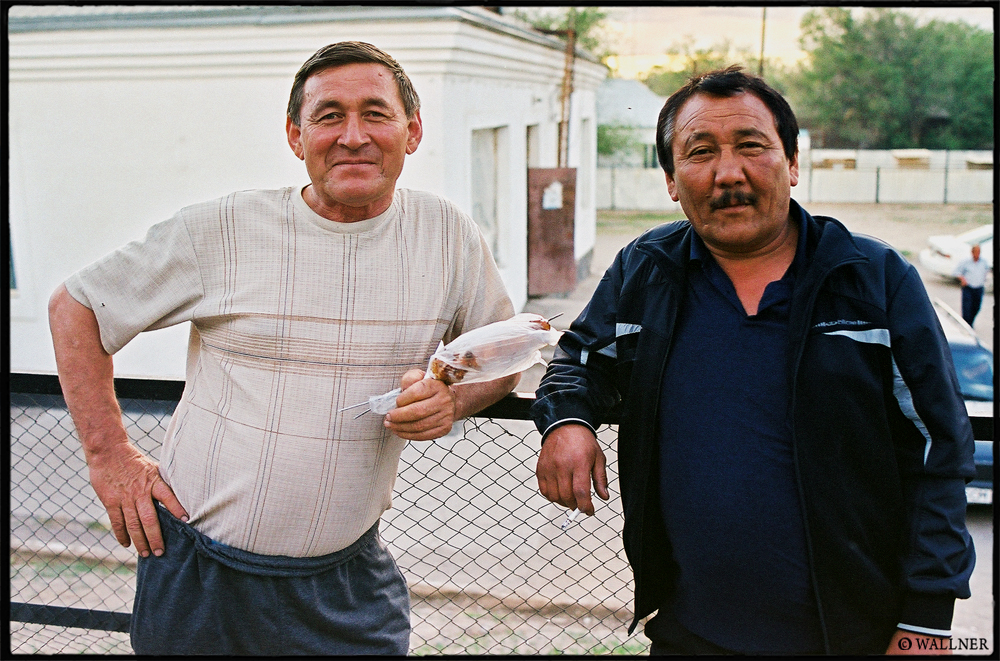 My parents are from Hungary, my mother language is Hungarian and I feel more Hungarian than German on most days. Going to Kazakhstan has been a small dream of mine, to go back to the place where the Magyars, (Huns or Hungarians in English) originate from. Neither my relatives nor history books can really pin point from where our ancestors started their journey westwards. I have heard and read from various sources that they embarked around the 9th century from somewhere in between the Ural and Altay mountains, which is quite vague. Well anyway, while communing with these men within the train, they somehow managed to give me the impression with sign language that the Kazakh & Hungarians are one. At least I came a bit closer to see where my ancestors originate from. 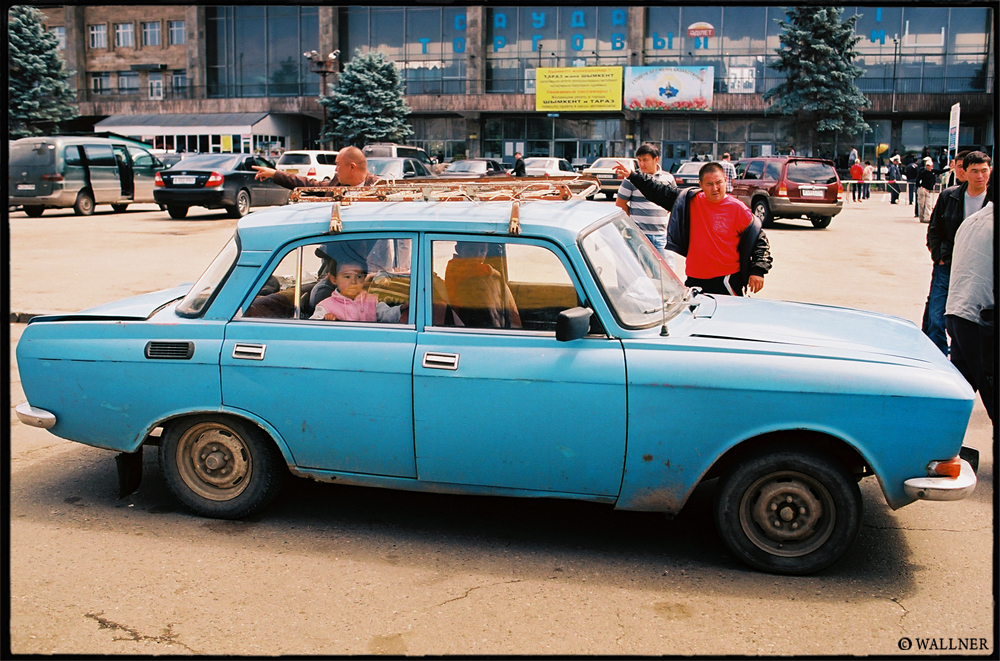 Not having a drivers licence in my mid 20s, can kind of indicate that I don’t really care much about cars in general. Don’t care if someone is driving a Ferrari or a Porshe down the block, but a Lada makes my head turn. There is something charming about these vehicles that grabs my attention. I guess their shape, style and engine sound just makes you feel like being transported back to 1979.

This is not quite how I imagined the former/old capital of Kazakhstan to look like. Almaty (meaning ‘the Father of apples’) as well as many other cities in Kazakhstan are actually quite rich and developed. Kazakhstan occupies quite rich land containing oil and natural gases around the eastern side of the Caspian Sea, and is part of the top ten biggest oil producers by containing 7.8 billion tons of oil, and 7.1 billions m3 of natural gases. This concludes that if you haven’t got much notes in your wallet, you won’t be doing much within the Republic. 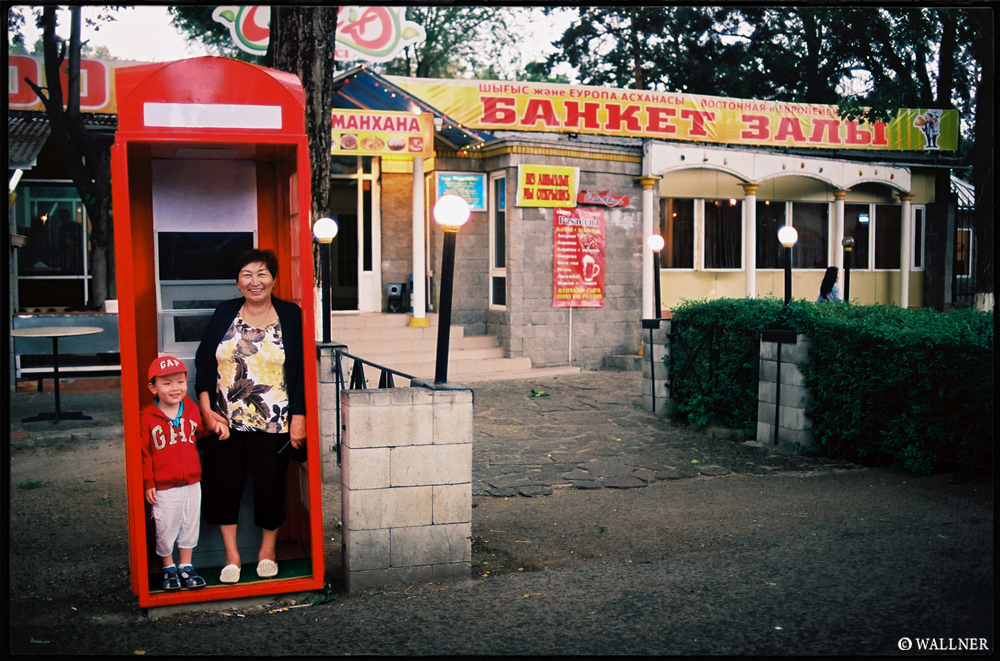 Once in Almaty, one kind of feels a tiny step closer to the West coming from China. Besides exchanging Chinese symbols to Russian Cyrillic characters, rice to bread in nutrition, one can feel a bit being part of a Caucasian race again when being mistaken as one of the 1/3 of Russians (or of Russian background) living within Kazakhstan.

We have all voted Kazakhstan to contain the most beautiful women of Central Asia. Find yourself a wife here. 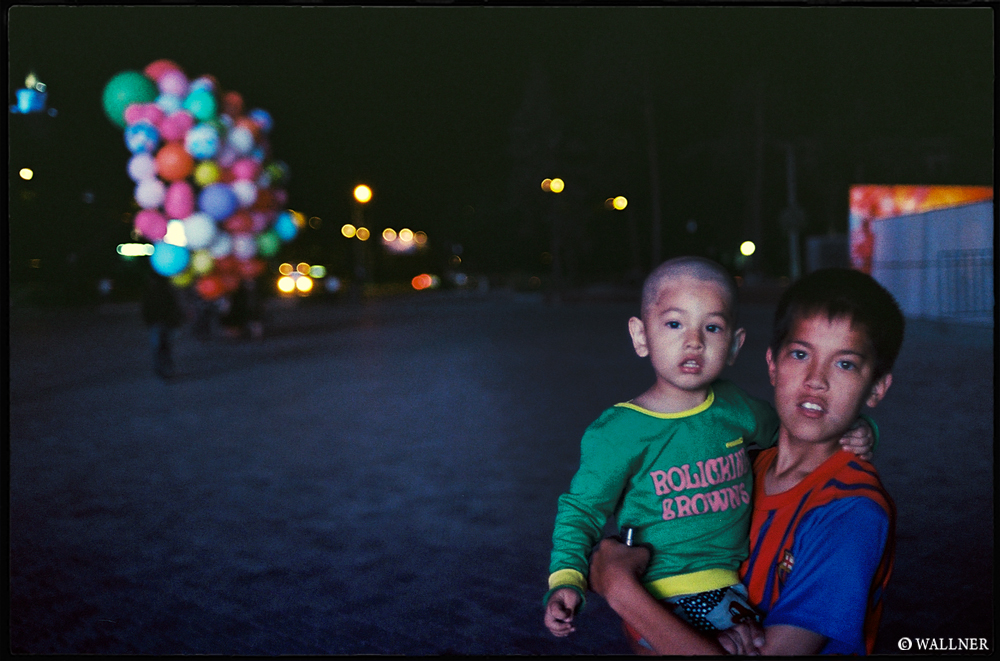 He didn’t care about skateboarding, all he wanted was some baloons. 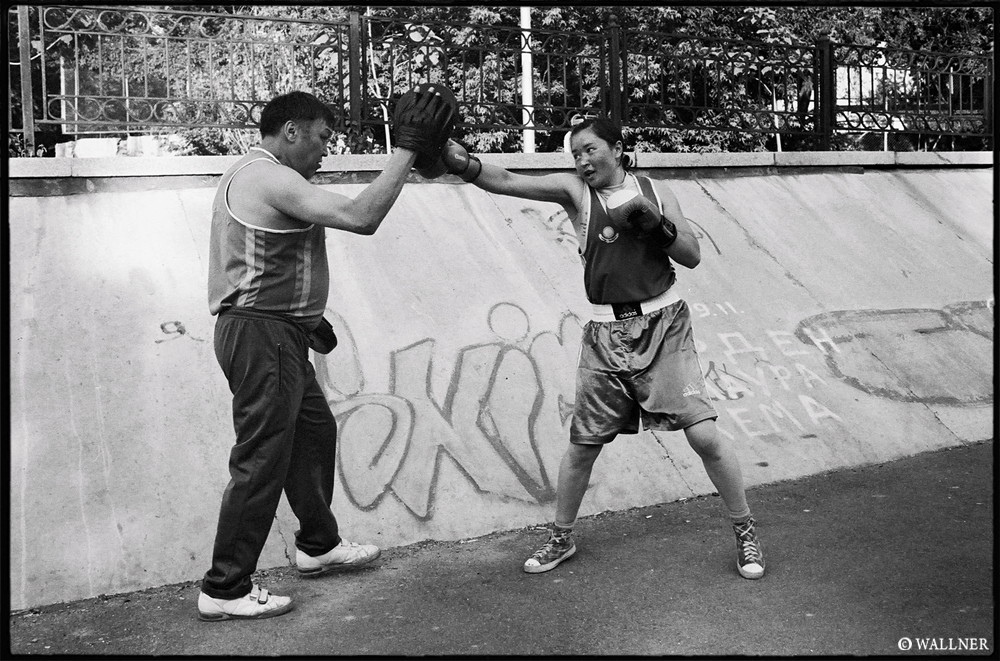 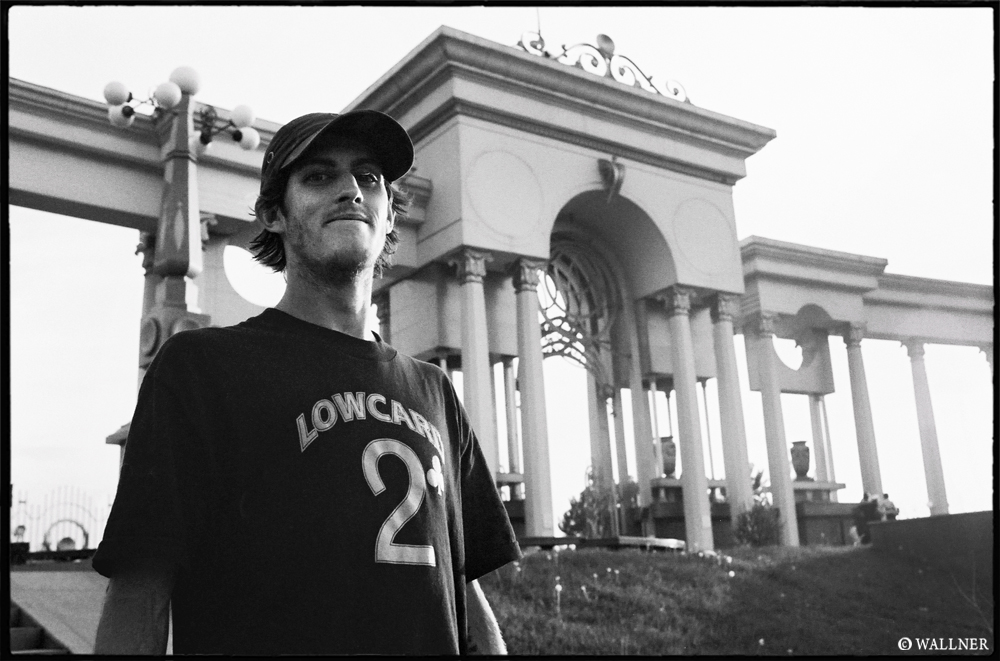 Dave Bachinsky might not be good at boxing, but he managed to knock out almost all spots where the locals took us to. From Frontside flipping huge kickers over garbage cans first try, and heelflipping 14 stairs with someone else’s board, he really made us all ask ourselves, ‘What the f*#ck is a Bachinsky?‘ He can’t be human the way he skates. 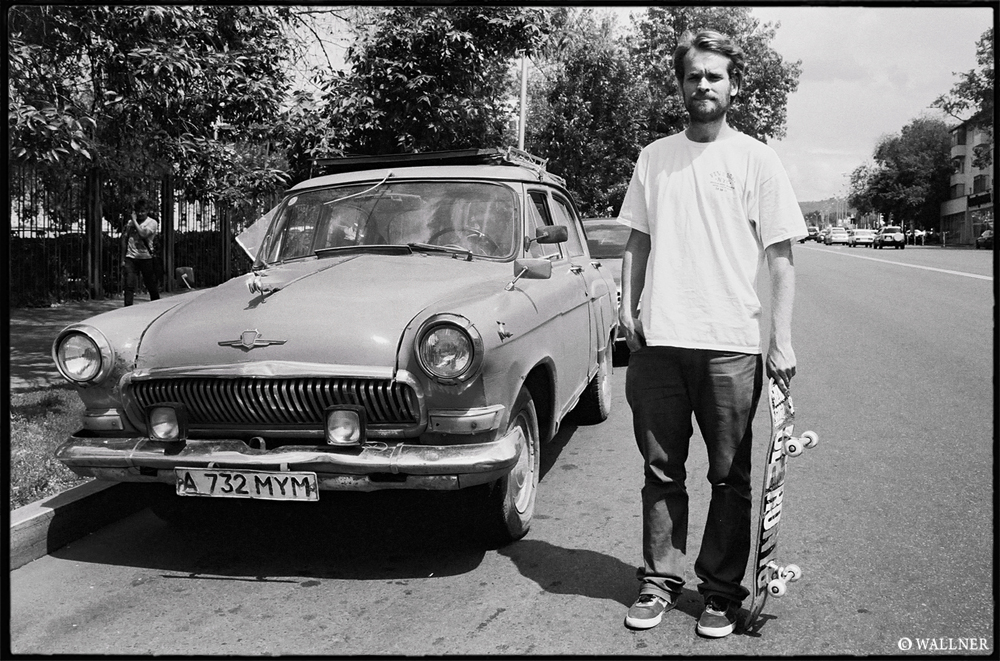 Jimmy McDonald is known for his spectacular parts with unique trick & spot selection from Philadelphia to New York. I was very happy to hear when Jimmy somehow managed to get two weeks off from his job that he just started to join our voyage from Beijing to Almaty. Having the ability to speak english in various accents such as French, Russian and British, his presence was shared in many different alter egos, one being, Jimmy Shoelace, the British lad working on his sponsor-me tape. Very amusing memories with one of the best gingers within the skateboarding industry. 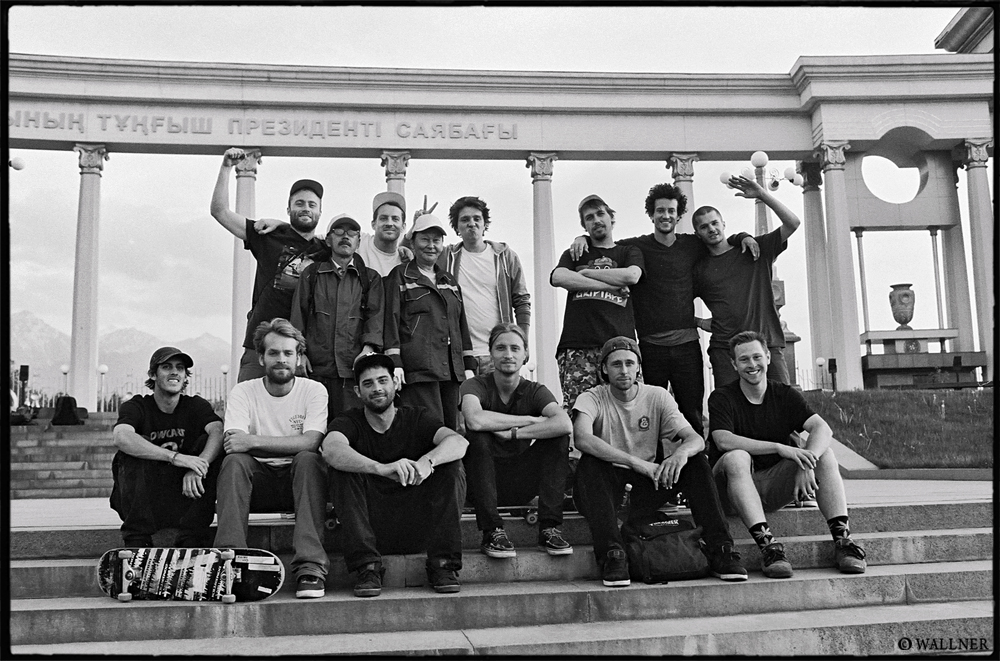 The rest of the crew from top left to bottom right. Laurence Keefe, Random Street cleaners, Alexey Lapin, Charles Lanceplaine, Kirill Korobkov, Michael Mackrodt, Gosha Konyshev, Dave Bachinsky, Jimmy McDonald, Kenny Reed, Dan Zvereff, Walker Ryan & Brian Kelley. Its fun to travel in a big group, as much as annoying it can get to wait for everyone to have breakfast at different times, its always a blast having a mob anywhere you go. Charles, Walker, Brian, Jimmy and Dave left from Almaty and Michael, Kenny and the four Russians Kirill, Alexey, Stas and Gosha joined for Part II which would be from Almaty to Ashgabat, Turkmenistan. 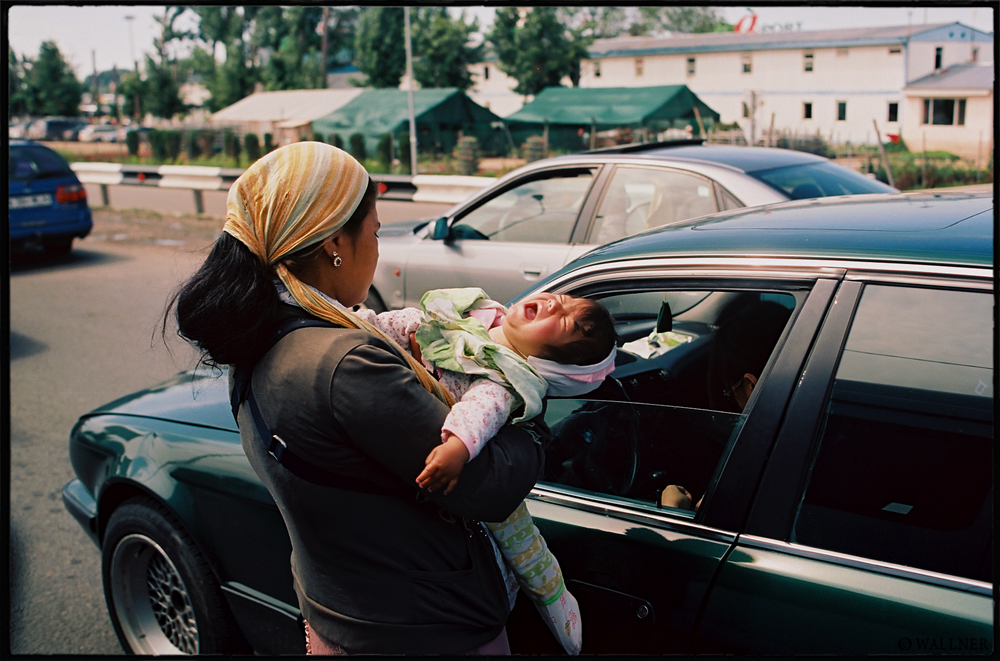 Our Kazakhstan experience ended within a half a week, and we were on the road to Kyrgyzstan, stuck between red lights filled with mothers and infants trying to get some Kazakh tenge out of you before leaving the Republic.