As difficult as it might be to remember how to spell Kyrgyzstan in English, it is just one of the many distinguishable traits which makes this landlocked republic of Central Asia quite a thrill seeking destination. Kyrgyzstan is a fairly normal place besides its unexceptionally crooked and confusing borders which has caused ethnic cleansing, beyond belief marital customs of kidnapping the bride, and the traditional coup of taking over the parliament every half a decade. Obtaining a Krgyz visa can be quite bizarre in most countries. Laurence (above) had to enter someones home to apply for a visa in Tokyo, where he was welcomed with tea and a warning to be careful in Kyrgyzstan. 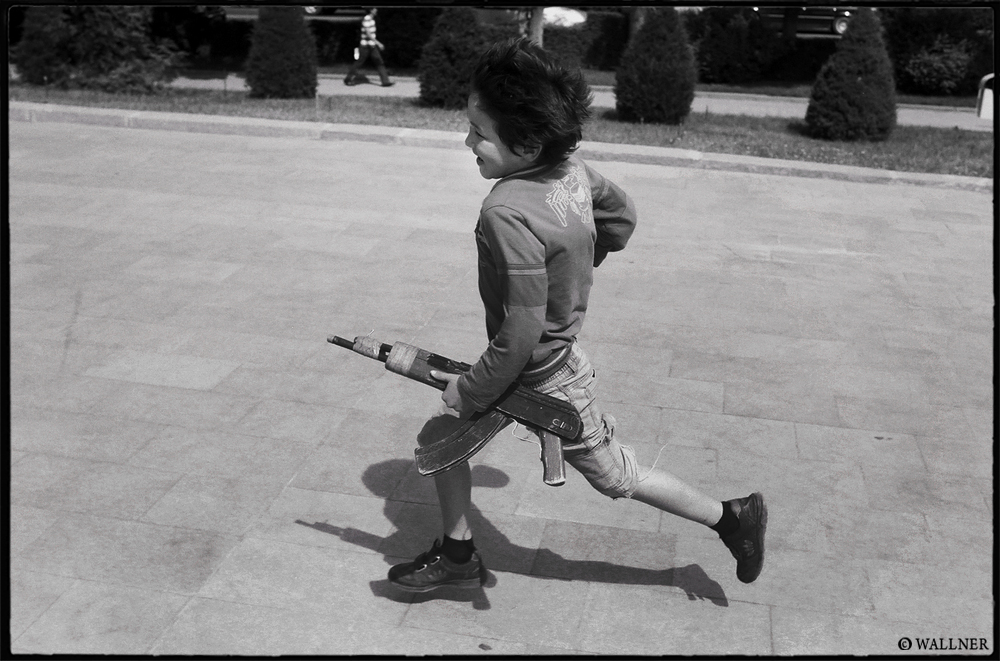 Kyrgyzstan tends not to be on the front pages of the newspapers besides when they hold their routinely revolutions and protest. The first Kyrgyz revolution known as the Tulip Revolution, overthrew Askar Akayev and his corrupt government in 2005. Only 5 years later it was time to sweep President Kurmanbek Bakiyev from power. During a dinner in Bishkek, one of the locals explained it to be Kyrgyz tradition to start a coup. It almost feels like the country can be stable for a half a decade until a revolution, an ethnic riot or cleansing somehow emerges. 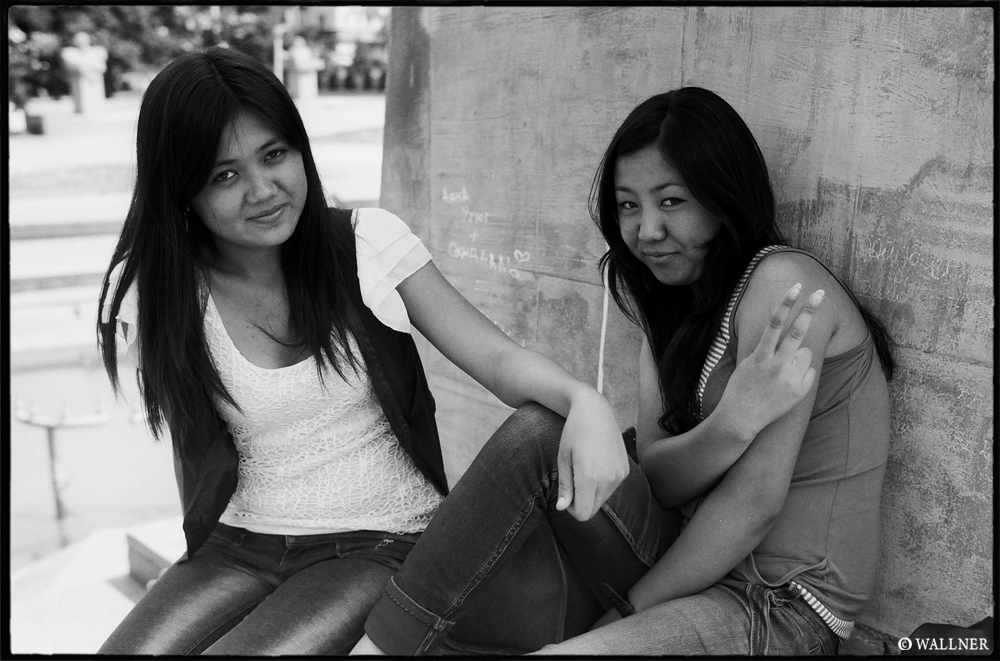 Kyrgyzstan has had a pretty terrible tradition of asking for the ladies hand. Still happening but very rarely, the women get kidnapped and are forced to get married by the kidnapper with the help of their family and friends. This way of getting married was illegal during Soviet dominated times, but is widely used again in the countrysides after their independence in 1991. They used to kidnap the women on horseback, which has evolved to car and by taxi if the groom doesn’t own a car. In many cases it is just a ritual where the women and the kidnapper have already dated for a while and the lady was expecting to get kidnapped. But in most scenarios it is totally unacceptable, but the government doesn’t do much to intervene. Here is a good read if you want to know more. 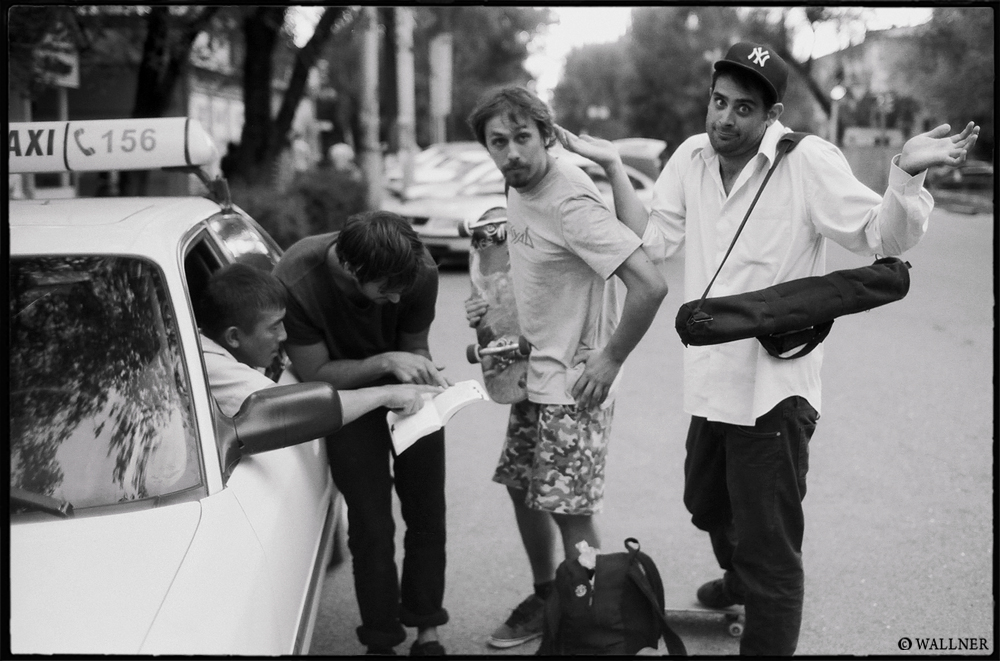 Getting lost is part of the journey. 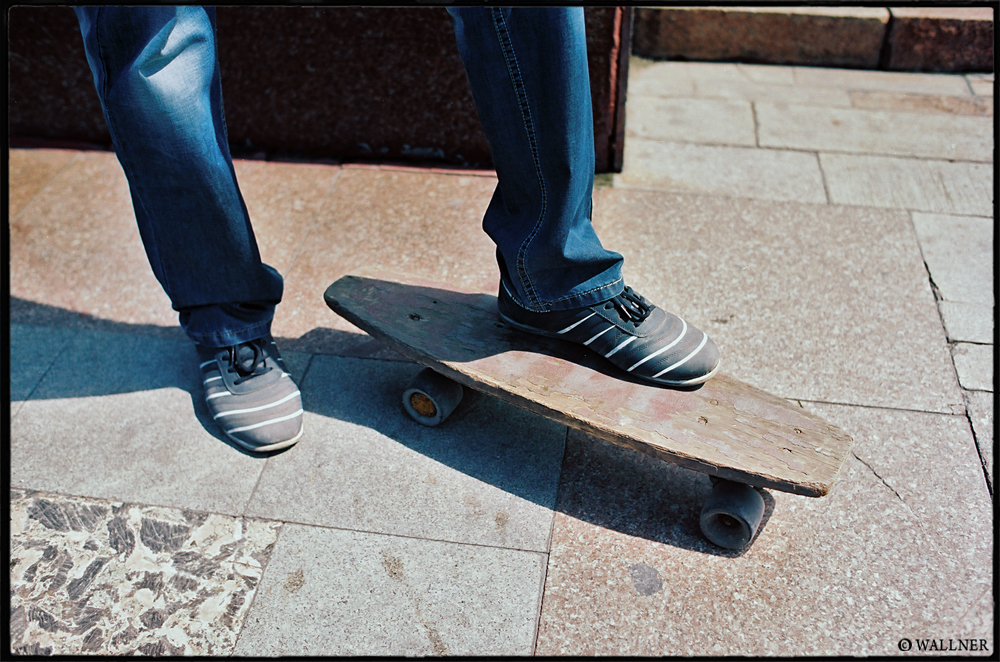 The Kyrgyz local skate community lacks the visit of westerners as you can see above.

Stas Provotorov rides for Nasvay and sometimes even tries it. Nasvaya is a Central Asia chewing tobacco, mixed with nicotine, lime and animal manure which is pretty much an organic fertilizer containing bedding straw & random animal feces. According to a study forty percent of men from rural areas of Central Asia, which includes almost every taxi driver we had hired to get from city to city, use it. Stas & the other guys tried nasvay and it usually ended up with a slight feeling of dizziness followed up with vomiting out of the window. No wonder, it most likely contains chicken shit. 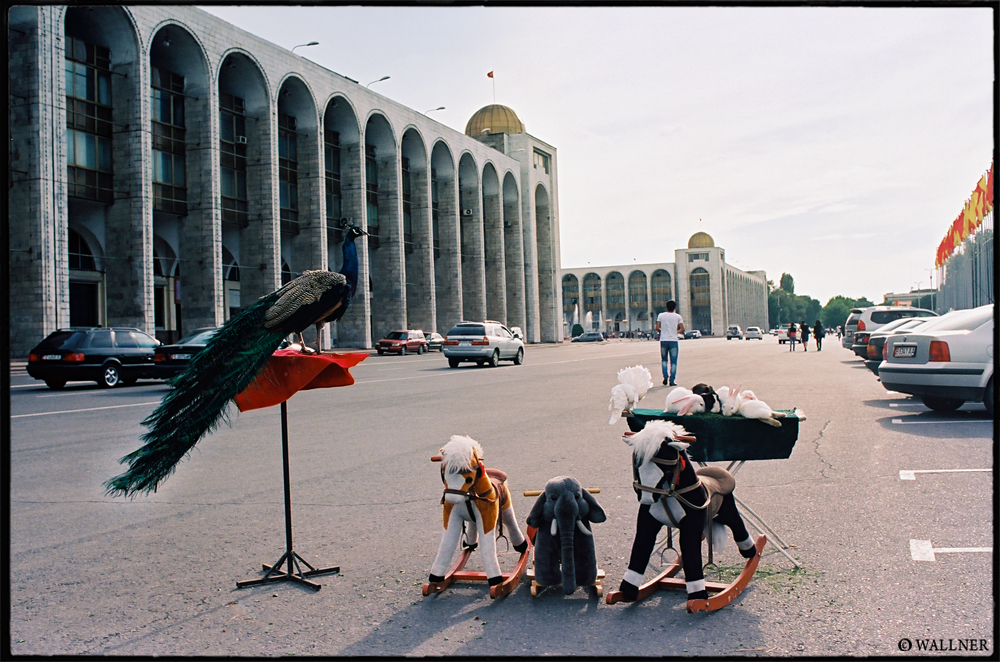 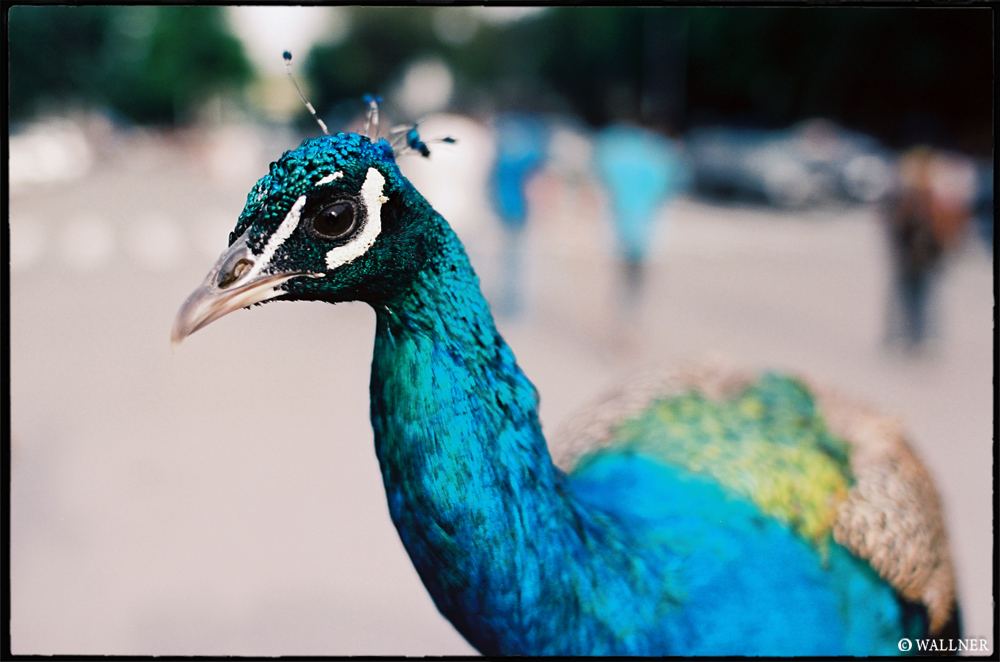 We all enjoyed our stay in Bishkek very much. Thank you all the skaters, Musa and Selbi (both actually from Turkmenistan) for showing us around and educating us a bit about Kyrgyzstan over Lebanese food. 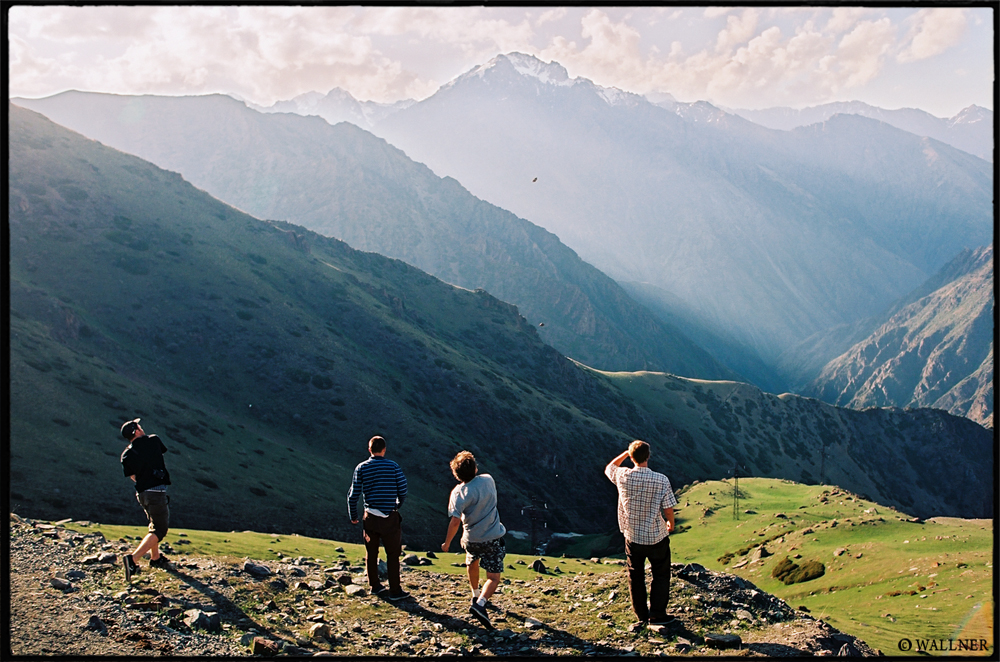 Kyrgyzstan can be refereed to the ‘Switzerland of Central Asia’ with the Tian Shan mountain range covering almost the entire country. To continue our journey along the Silk Road we had to traverse through the Fergana Valley, which sounds quite easy with only 600 kilometers between Bishkek and Osh. It took us over two days of driving to cross the valleys because of the curvy mountain roads in addition to all the ex-soviet bureaucratic nightmare we had to deal with in order to get a permission slip from the state to let us travel with a hired driver through the valley.

No Photoshop whatsoever! The Toktogul Reservoir was absolutely stunning with its vivid turquoise color. 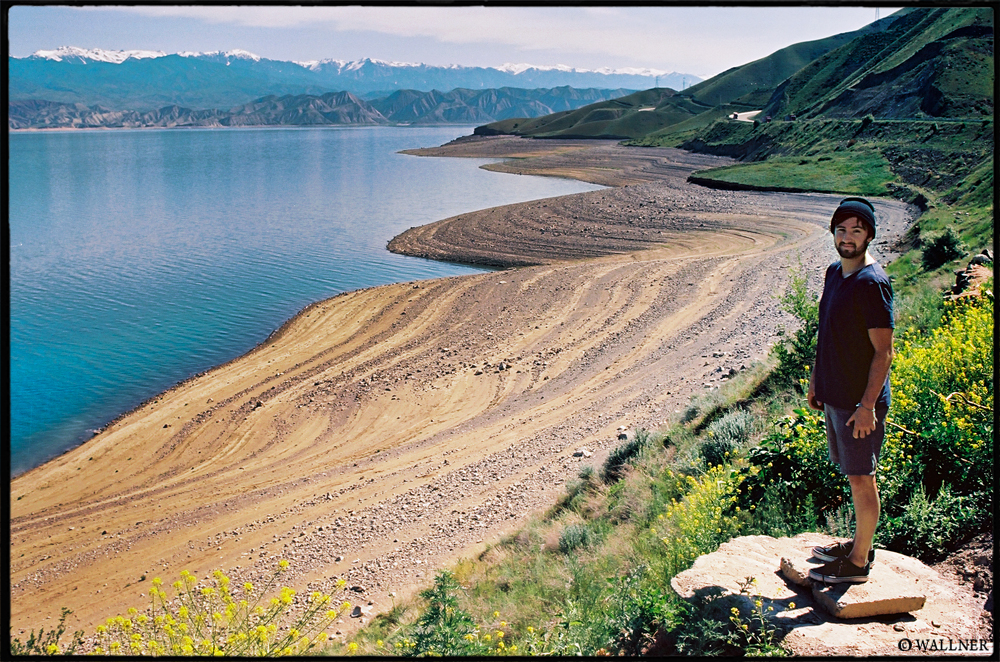 Tobias Ulbrich from Berlin joined the Visualtraveling crew for the bizzaristany countries along the Silk Road. 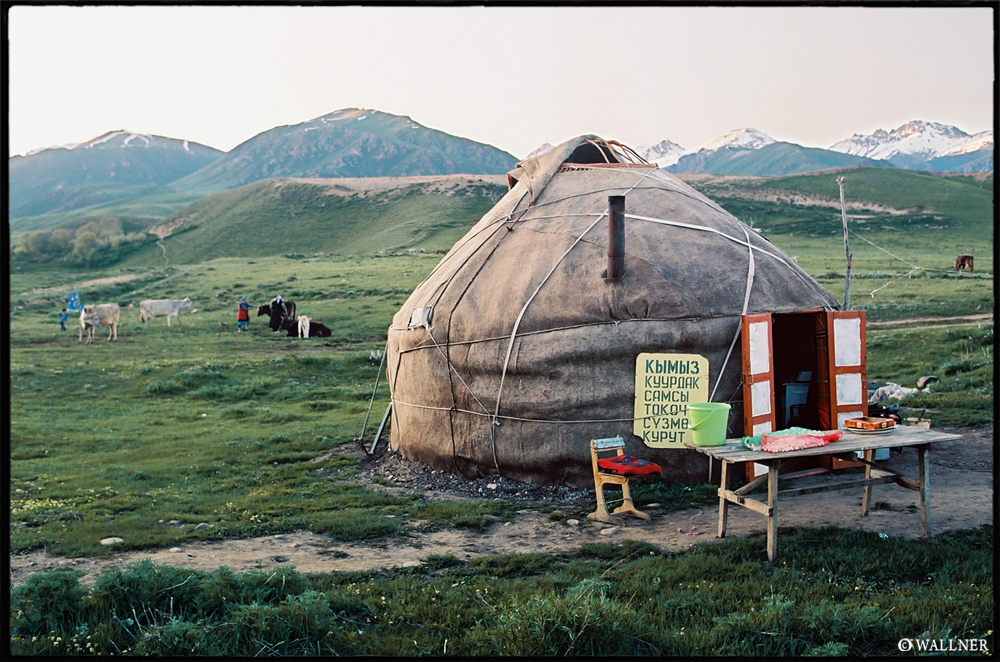 Yurts with Kyrgyz selling various dairy products along the side of the roads. 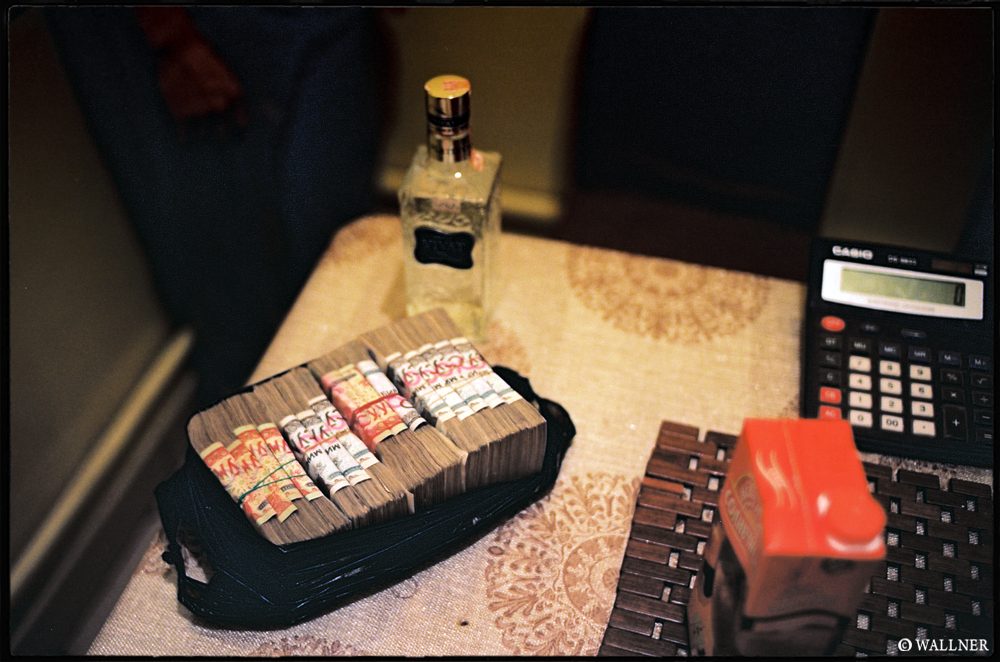 After being on the road for two days instead of one, we have pretty much lost our day of stay in Osh (before going to Uzbekistan) as we have planned. Upon arrival we were confronted by other tourists of the preparation we would need to undertake to be able to pass into the Republic of Uzbekistan smoothly, which is not that easy keeping in mind that the boarders of Uzbekistan are reported to be one of the most corrupt. First of all you would need to count every item you are taking into the country, which includes everything from socks to lens caps. Then, only take in as much money into the country as much you will carry out (otherwise the boarder guards are allowed to take it), but at the same time you are advised to not bring in too much US dollars even though there are no operating ATM machines within the country. Then for the media guys like Alexey and myself, we would need to divide all the lenses and camera equipment among us ten, to pretty much hide the fact that we are shooting a video in Uzbekistan. All of this got me pretty paranoid. We all ran around Osh to change our US dollars into Uzbek soms with the black market exchange rate to lower our intake of foreign currency, as well as receive almost 1/3 more than with the official rate that banks would give you in Uzbekistan. And on top of all of that, the Uzbek soms is extremely inflated, which meant that the highest note their currency held was equivalent to 40 US cents. The pack of money (almost 1 million Uzbek soms) in the plastic bag above is 270 USD that Stas changed in Osh in a back room of a restaurant with some shady looking characters. 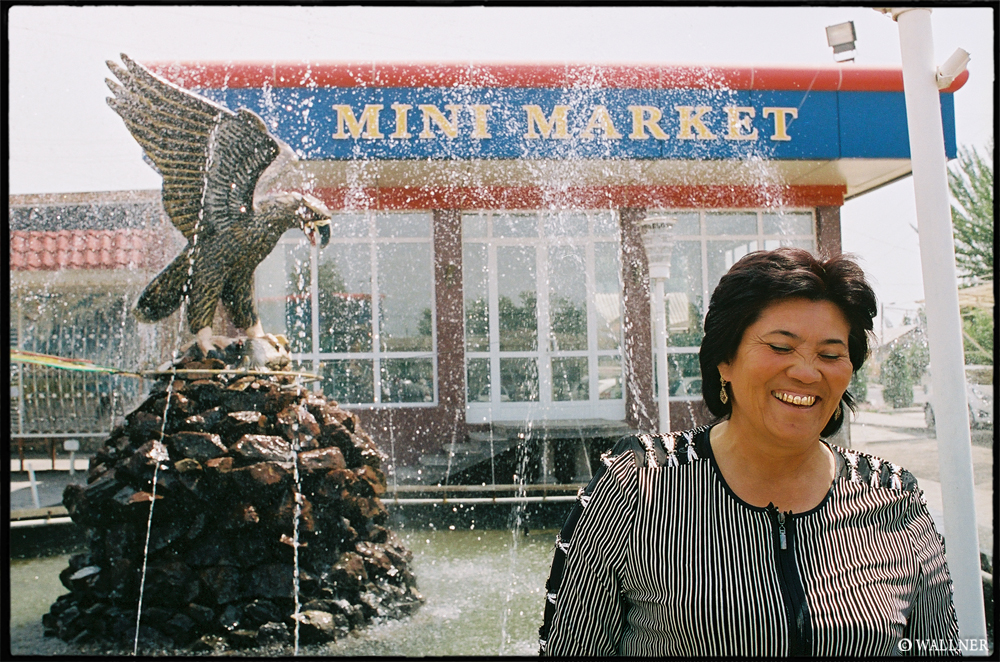 Crossing into Uzbekistan was pretty nerve wrecking and we were asked to count all our money and show them the books & cameras that we took into the country, but there is something about skateboards that loosens up the situation. Kirill was the first one to pass and introduced the guards to what a skateboard was, from that point it went pretty smoothly without any hassles. One of the female officer with gold teeth even flirted a bit with me and asked for my e-mail address. Apparently investing into gold fronts is quite a usual way to store your money here, since right after crossing the boarder this lady (above) drove us the six hours it took to reach the capital, Tashkent. 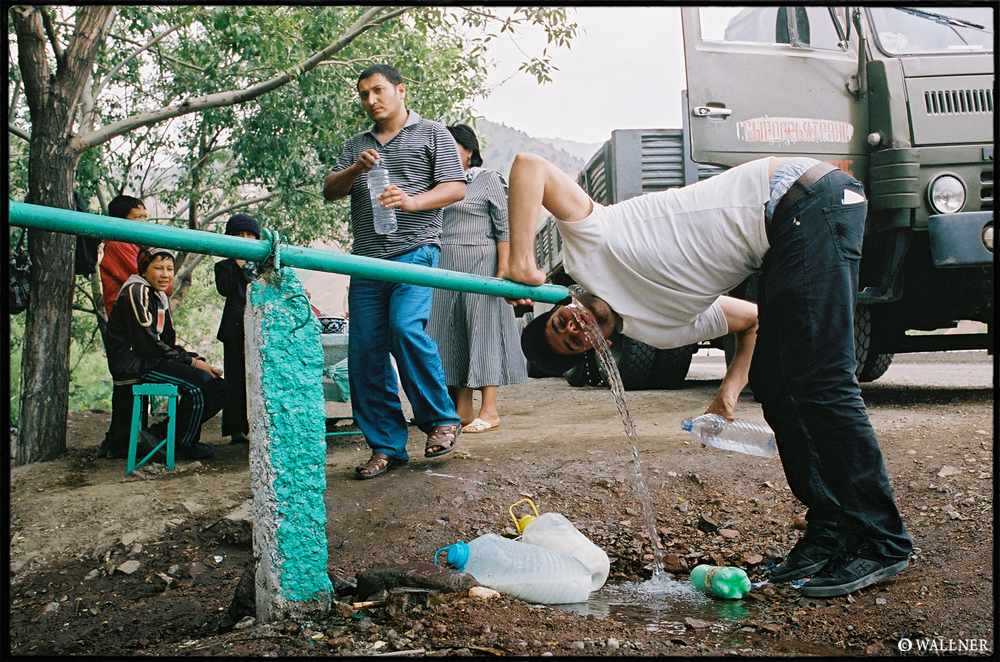 Uzbekistan is the only landlocked country as well as Liechtenstein that is fully surrounded by landlocked countries. Fresh Water has caused many conflicts socially, economically and politically between countries within Central Asia. Since both Kyrgyzstan and Tajikistan are holding both the Tian Shan and the Pamir mountain ranges of Central Asia which contains fresh water, Uzbekistan and Turkmenistan are very depended on the rivers flowing down into their fields which keeps the crops and their main export of wool growing. So you can image that Uzbeks were pretty angry when Tajikistan built dams on the Amu Darya and Syr Darya. These conflicts have been going back and forth, mainly the result of the zig-zagging borderlines Stalin drew in the early 20th Century, which in his defence he didn’t think would still be active many decades later. 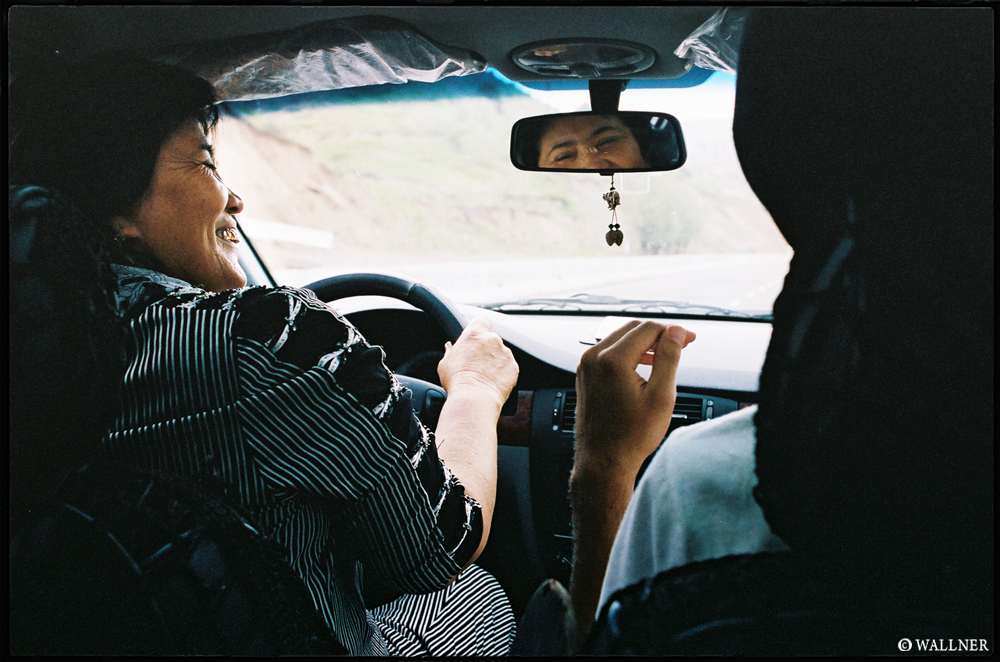 In the back seat within the car of the fastest women driver of Uzbekistan. Besides getting speeding tickets, she sang, she danced, clapped her hands while driving and talking on the phone. 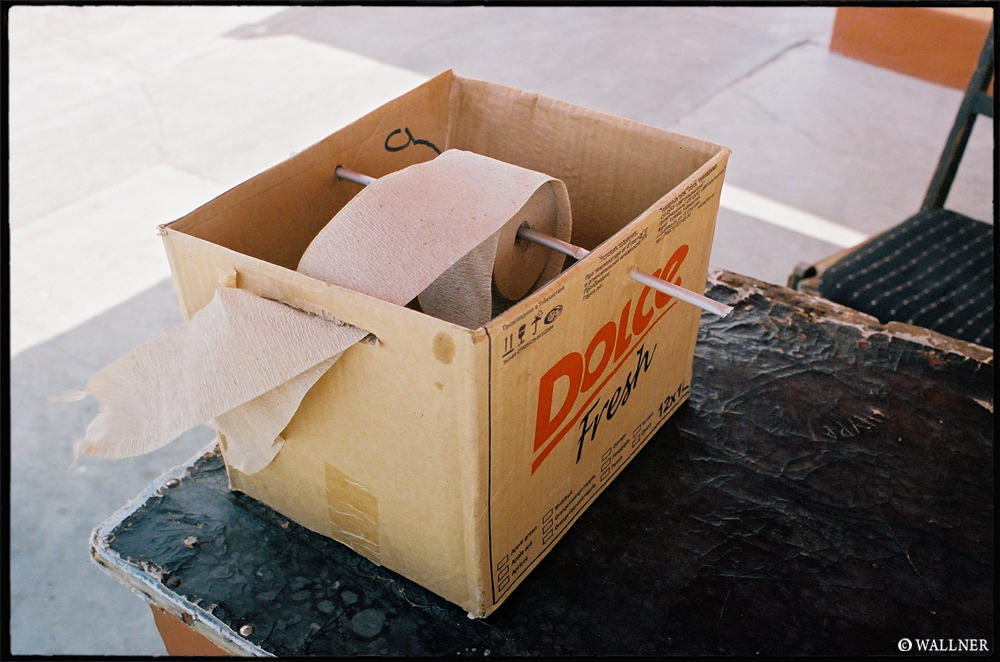 At this point we almost reached Tashkent after three days of driving around six to eight hours per day. The scenery was breathtaking and the toilets were death-taking. Diarrhea…